No surprise here. The ICC has officially opened an investigation into the situation in Libya just days after the UN Security Council unanimously referred Libya to the Court. The Prosecutor will investigate potential crimes against humanity committed by Muammar Gaddafi, his sons as well as senior leaders.

Politically speaking, this was a no-brainer. The Court has endured its share of bumps and bruises in recent months: Kenyan officials have gone an a tour de resistance in an attempt to drum up regional support against the Court; the African Union, the Arab League, China and others have all expressed concerns about the arrest warrant against Sudanese President Omar al-Bashir and called for the charges against him to be dropped or deferred; al-Bashir has defied the charges against him by travelling to numerous states, including ICC member states; and the trial of Thomas Lubanga Dyilo came close to collapsing for the second time this past summer when judges at the ICC declared that his right to a fair trial had been breached (for the second time no less).

There’s a ton of legitimacy to be gained by the ICC in the Libyan case. First of all, there appears to be an unprecedented international level of support for the Court’s involvement, signaled most obviously by the unanimous support by the UN Security Council for Resolution 1970 (2011). With talk of military forces mobilizing near Libya and a potential military intervention under the rubric of R2P, the potential level of cooperation from the international community could very well ensure that Gaddafi and others are detained. The degree of commitment to international cooperation for a Court which relies on it to enforce its arrest warrants is a hopeful sign for the ICC. We haven’t seen anything like this level of commitment since the late 1990s when Slobodan Milosevic was detained just weeks after NATO’s intervention in Serbia in 1999. It is worth noting that the detainment of Milosevic gained the International Criminal Tribunal for Yugoslavia significant international currency and legitimacy. On a side note, if Gaddafi is brought to the ICC, both he and Milosevic would share the distinction of being allies of the West prior to criminal proceedings being brought against them. 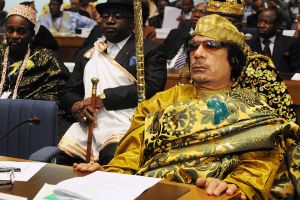 Gadaffi may be moving from the front row of international meetings to the back row of an ICC courtroom (Photo: The Guardian)

In one way or another, this also puts the African Union (AU) in a bit of a quandary. The AU has passed resolutions saying that no AU member-state would cooperate with the Court regarding the arrest warrant against Bashir. It should, of course be noted that the AU shouldn’t be treated as monolithic. A high-level panel headed by Thabo Mbeki implicitly supported the criminal action against al-Bashir. Further, some officials at the ICC have suggested that a number of African and Arab states agreed that Bashir should face justice but that they could not declare so publicly or officially. Some are more open with their support. South African President Jacob Zuma recently declared that should Bashir visit, he would be arrested.

With regards to the referral of Libya to the ICC, three AU member states (South Africa, Nigeria and Gabon) voted in support of Resolution 1970. As noted by others, the AU has been silent on the subject. ICC Prosecutor Luis Moreno-Ocampo has reached out the AU saying he would “liaise” with them and others. The participation of the AU, however, remains unclear. Nevertheless, the AU’s position towards the Court will have to be clarified in coming weeks and months. ICC-bashing on the basis of the Bashir case alone will no longer suffice.

If Gaddafi is successfully detained and brought before the ICC, it would mark an important success for the Court. It would be the first head of state in the Court’s custody. It may even make some states re-think their position on the question of Bashir’s arrest warrant.It would also no doubt illustrate that the Court and the international community can work productively together to achieve the goals of justice.

Updated: Also, check out the fascinating analysis by Christopher Gevers and Max du Plessis at their blog War and Law, especially with regards the the ICC-AU relationship:

“It will now be difficult to take seriously claims that the ICC’s involvement in Libya is a further example of the Court’s unhealthy preoccupation with Africa. Moreover, one can hope that the apparent support within Africa for the Libyan referral might have the unintended but welcome effect of unmasking many of the AU’s ICC positions for what they are: political rather than principled objections…make no mistake: the apparent African support for the Libyan referral is because Ghadaffi is increasingly yesterday’s man.”

Press Conference with Luis Moreno-Ocampo at the ICC today:

Statement by the Coalition of the International Criminal Court:

Mark Kersten is a consultant at the Wayamo Foundation, a Senior Researcher at the Munk School of Global Affairs, and a law student at McGill University Law School. He is also author of the book, 'Justice in Conflict - The Effects of the International Criminal Court's Interventions on Ending Wars and Building Peace' (Oxford University Press, 2016).
View all posts by Mark Kersten →
This entry was posted in African Union (AU), International Criminal Court (ICC), Kosovo, Libya, Middle East, Serbia, Slobodan Milosevic. Bookmark the permalink.