Democracy at the Brink: A New Leader for Guatemala

With her latest post, Holly Dranginis comments on the upcoming election of a new President in Guatemala. As a Fulbright Scholar in Guatemala from 2006-2007 studying transitional justice and urban political violence, Holly is an informed and interested observer of justice and democratization in Guatemala. Enjoy!

This Sunday, Guatemalans will go to the polls to elect a new president. Voting will follow weeks of political violence, a common pattern for many struggling democracies in election season.

During the last election four years ago, the situation was no different. Amilcar Mendez, a renowned human rights activist, lost his son in a premeditated attack; two weeks later, the family member of another grassroots advocate was killed, along with a young boy, by national police who open fired on a peaceful protest.

This year, an estimated 38 people—political activists, relatives of politicians and even candidates—have been killed as a result of election-related incidents, helping make this campaign period one of the bloodiest in the country’s history.  In contrast, Sunday’s vote is slated to be relatively peaceful, shrouding the violence in the underreported lead-up rather than on the day the world will be watching.

We consider Guatemala a successful example of a democracy-in-progress—a country with a thriving export economy, vibrant ethnic diversity and deemed safe enough in recent years to return thousands of refugees who were granted asylum in the US during the 1960-1996 armed conflict. Yet campaign violence in past weeks hardly evokes progress. And Guatemala’s violence statistics over the past few years are no less alarming.

Homicide rates have climbed to over 52 per 100,000 (a rate of 10 per 100,000 indicates an epidemic of violence). Two women are killed a day, prompting the use of the term femicide. Furthermore, a culture of impunity is growing, as only 1.4% of homicide cases end in convictions. In popular media, incidents are attributed to random crime and gang violence, but experts have implicated the state in complicity if not direct involvement in the crisis.

The term “democratization” is a buzzword for media audiences worldwide, but Guatemala is a reminder that achieving it is not an overnight endeavor, and the process of its pursuit can be deceptive. Elections are an accepted benchmark, and for many an indication, that the years of organized violence are over. However, despite an ostensible democratic election system, the bloodshed leading up to Sunday’s elections illustrates that in Guatemala, a war is still on.

Experts and citizens use rhetoric like “low-impact war” and “the war on women,” and statistics of violence correspond to such terminology. Guatemalans are fleeing, immigrating to the US at rates higher than any other Central American country, many to escape the worsening security situation. Current president Alvaro Colom boasted decreased violence as a key tenet of his campaign, but crime and impunity rates are higher now than they were during the war.

Given these conditions, and the fact that many of those responsible for grave crimes during the armed conflict are still in positions of authority, Guatemala’s election period was bound to be compromised. General Otto Perez Molina is the frontrunner with a strong lead over other candidates despite his alleged participation in political assassinations while he was on the CIA payroll during the armed conflict. Other red flags are his implication in the use of torture during the genocide in the early 1980s and his diploma from the controversial Western Hemisphere Institute for Security Cooperation (formerly the School of the Americas).  Finally, a 2007 interview connected Molina to the infamous murder of Bishop Juan Gerardi, head of a comprehensive public inquiry into the wartime violence, just days after their report, “Guatemala: Nunca Más,” was released.

The main church in Quiche, a district where over half the atrocities during the Guatemalan civil war took place. (Photo: Holly Dranginis)

Research suggests that Molina’s voter support stems from coercion tactics like threats, violence, and payments for party loyalty. Some even cite what is known as Stockholm Syndrome—allegiance to perpetrators maintained by victims due to conditioning undergone during the conflict. In point of fact, among those flying flags of Molina’s party today are the very people who were targeted by the war’s violence. In one rural resettlement community for massacre survivors, his promotional material covers the substandard housing and children shout his campaign jingles as they play in the streets. The deceitful and illicit way in which Molina is doing business seems to be working.

The potential implications for Molina’s victory are grave. He promises to fight violence and poverty with a “hard fist,” which translates into pseudo-militarization, vigilantism, and increased control from the top levels of power. It means combating criminal activity with fear-inducing propaganda and covert military police units. As we see in other arenas where democratic reconstruction is the goal, violence begets violence.

Molina’s plan is one that will likely encourage society’s current state of emergency in which fear dictates citizen behavior, powerful individuals operate with impunity, and violence continues to rise. Experts lament that his election will undermine the positive strides Guatemala has made recently, particularly regarding post-war justice efforts (See, the Dos Erres case and arrests related to the Fernando Garcia case). 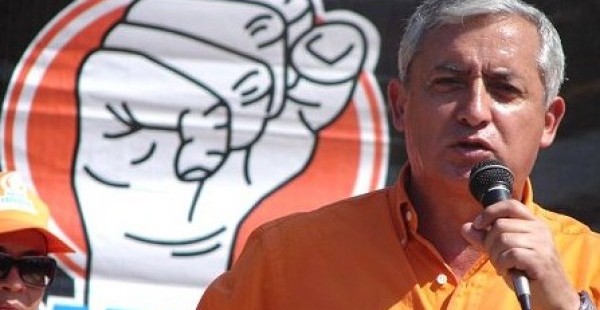 In a statement she made this week, UN High Commissioner for Human Rights, Navi , offered counsel in light of Sunday’s vote: “I hope that Guatemala has the political will to overcome the challenges it faces. Implementing the priority agenda of action on human rights is an opportunity to move in that direction; it’s to opt for strengthening the rule of law and democracy.”

Leadership in Guatemala, particularly on the executive level, has been sorely lacking.  For this society to realize Pillay’s hope, Molina, if elected, will have to summon the will to perform an about-face from his previous leadership methods and move in a new direction toward transparency and protection for the Guatemalan people.

Mark Kersten is a consultant at the Wayamo Foundation, a Senior Researcher at the Munk School of Global Affairs, and a law student at McGill University Law School. He is also author of the book, 'Justice in Conflict - The Effects of the International Criminal Court's Interventions on Ending Wars and Building Peace' (Oxford University Press, 2016).
View all posts by Mark Kersten →
This entry was posted in Guatemala, Latin America, Torture, Transitional Justice. Bookmark the permalink.