US Troop Deployment Revisited – The Hunt for Kony

Posted on November 3, 2011 by Patrick Wegner

US Troops in the field (New Vision)

US President Barack Obama’s decision to send 100 combat armed military advisors to Uganda, Central African Republic (CAR), the Democratic Republic of Congo (DRC) and Southern Sudan made worldwide headlines about three weeks ago. The controversial decision and discussions about its consequences brought the LRA conflict back into the headlines after the world had all but forgotten about the steady trickle of mutilations, killings and abductions mainly committed in the DRC and CAR by the LRA. One thing has become very clear to me in interviews with diplomats and staff of international organizations that are working in the context of the conflict: the LRA is no longer seen as a threat for regional stability. This means that the LRA conflict has ceased to matter in the big picture of geopolitics. It is another one of those low intensity conflicts that claim the lives of innocent civilians on a daily basis but are not endangering the security interests of powerful nations. What does the US troop deployment mean in this context?

Since foreign policy practitioners do not see the conflict as a risk to regional stability, President Obama’s move could be regarded as a surprise. Yet, it makes perfect sense both in a US domestic as well as in an international perspective. The US has seen constant campaigning by civil society organizations like Enough and Invisible Children who pressure the US administration to do something about the deaths of innocent civilians in Central Africa. The campaigning led to the signing of the LRA Disarmament and Northern Uganda Recovery Act by Barack Obama in May 2010. A high ranking diplomat I talked to a couple of weeks before the troop deployment told me that he expects the US to ‘do something’ in the LRA context soon, as a Congress report on the LRA Act was upcoming in late October and the administration needed to be seen doing something. His prediction proved right. 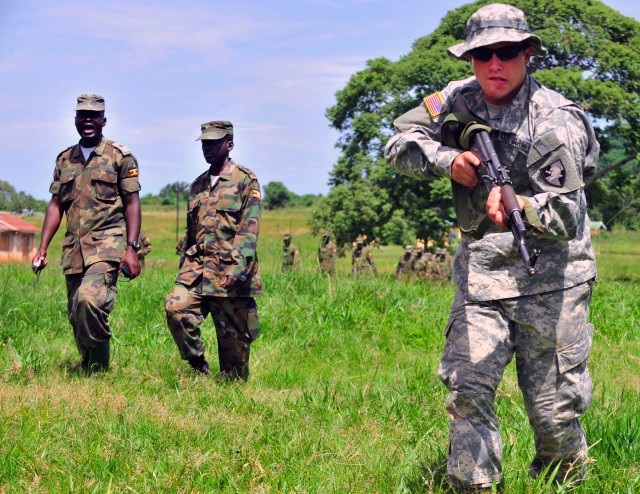 From the international perspective, Uganda is of high strategic importance in the region. The Uganda People’s Defence Forces (UPDF) is one of the strongest armies in the area. It plays a major role in the UN Mission in Somalia, provides staff for UNAMID in Darfur, and plays the leading role in regional efforts to hunt down the LRA. The fact that the UPDF is providing troops for these missions removes pressure from Western nations to deploy their own troops in the region. Finally, the recent discovery of oil has just increased Uganda’s importance. The decision can therefore also be seen as an acknowledgement of the important role Uganda is playing in the region.Many Ugandans I talked to are deeply distrustful of the US intervention. Most people think that the US is showing up now, years after the war ended in northern Uganda, because oil has been discovered in Amuru. Yet, the LRA is no longer a Ugandan issue. The LRA has spread over three states in the region, and people are still dying. So there are valid arguments for intervening on humanitarian grounds. But what is the impact of the deployment we can expect on the ground? Critics like Lindsay McCain of the Justice and Reconciliation Project from northern Uganda say that the deployment of US military advisors will reinforce the military logic of the conflict and lead to the death of innocent abducted children that travel with the LRA. She criticises the lack of a humanitarian component and a focus on protecting civilians in the affected regions from LRA attacks. I think those arguments are valid and point out a significant weakness of the US approach to combating the LRA. Yet, the deployment of US advisors might still help to stop the conflict and end the suffering of civilians in the longer term.

The US has been supporting the UPDF for several years. In the beginning, this support was mainly given through financial aid for the military budget. During Operation Lightning Thunder, that marked the end of negotiation efforts during the Juba Peace Process and was meant to ‘wipe out’ the LRA, US military advisors provided the UPDF with information and advice. Still the operation failed. Afterwards, the US supported the hunt for Kony and the remaining LRA rebels through providing the UPDF with GPS data and satellite imagery. Yet, the UPDF was not sufficiently equipped to act on that information. On the one hand, they had no means to use the exact GPS data the US provided them with, on the other hand the UPDF rapid response capacities were insufficient to hunt down the LRA fast enough.

The deployment of US military advisors on the ground who can help the UPDF to make use of the data forwarded by US military intelligence could make a real difference. The UPDF has been close to capturing or killing Kony at least twice in recent years. In August 2009, the UPDF ran into Joseph Kony’s bodyguards in CAR and killed several of them in the ensuing gunfight, yet Kony managed to escape while being chased by the UPDF.

In October 2011 the UPDF again ran into Kony’s entourage according to the UPDF spokesman. Kony moves inside several circles of security perimeters. Three rings of bodyguards move constantly with him, and as soon as the outer ring engages in combat, Kony has the opportunity to quickly flee into the opposite direction. But chances are that Kony will eventually run out of luck if the UPDF is able to track his group more closely with the help of US military advisors.

We might well see the end of Joseph Kony’s flight soon. Whether this would mean the end of the conflict is not clear though. The LRA has splintered into ever smaller groups and it is not clear in how far Kony still has full control of them. Independent LRA groups may be roaming through CAR and DRC abducting and killing civilians for years after Kony’s death or capture. Additionally, UN sources have told me that many armed groups and militias in the DRC have started mimicking LRA attacks to cover up their robberies. It is hard to say how much of the ‘LRA activity’ we see in the region is actually local banditry.

Finally, on an interesting side note, a former top LRA Commander I was able to talk to told me that Joseph Kony had announced as early as 1998 that his spirits had revealed to him that Ugandans would bring in the US to hunt him. Kony made a prophecy that the war would end when the US becomes involved. They would not be able to catch him, but would help the Acholi of northern Uganda to recover from the war. Kony said that his spirits revealed to him that he would just disappear in the jungle, ‘like Moses disappeared after leading his people to the Holy Land’. The spirits told him that the US would come to search for him, only to eventually find out that he had disappeared without a trace for ever.

2 Responses to US Troop Deployment Revisited – The Hunt for Kony