Laying the Law for a Future Syria

The following is an interview conducted by Adrian Gallagher with Yasmine Nahlawi of the Syrian Legal Development Programme. Adrian is a lecturer at Leeds University and the author of Genocide and Its Threat to Contemporary International Order. 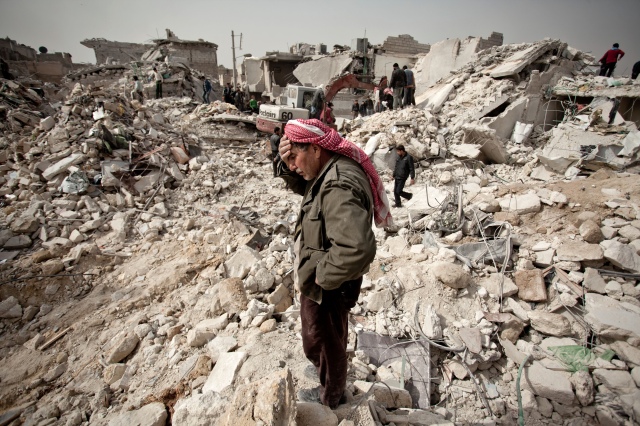 2015 will mark the 10th anniversary of the World Summit Outcome which endorsed the Responsibility to Protect (R2P) agreement. R2P embodies a three-fold responsibility:

1. ‘Each individual State has the responsibility to protect its populations from genocide, war crimes, ethnic cleansing and crimes against humanity’.

2. Second, ‘the international community should as appropriate, encourage and help states to exercise this responsibility’.

3. Third, if the state in question is deemed to be ‘manifestly failing’ to protect its population from genocide, war crimes, crimes against humanity, and ethnic cleansing then the international community, ‘through the United Nations’ has a responsibility to use coercive and non-coercive measures in a ‘timely and decisive manner’ under Chapters VI, VII, and VIII of the UN Charter on a ‘case-by-case’ basis.

Against this background, the on-going crisis in Syria – which clearly fits within the remit of R2P – has led critics to question whether ‘Syria marks the death of R2P as a viable, functional concept’.2 Analysts began to debate its demise.3 Amidst this debate, UN Special Advisor on the Responsibility to Protect, Dr. Jennifer Welsh, has stressed the need to recognise that there are actors in international society, other than the UN Security Council (UNSC) which can help facilitate the R2P.4 This is not to downplay the failings of the UNSC but to highlight that if we look beyond it, we may see the valuable role being played by other actors as they strive to help protect civiliansin Syria. It is with this in mind that I takes this opportunity to interviewed Yasmine Nahlawi (YN) the External Affairs Director of the Syrian Legal Development Programme The following is a transcript of our discussion.

Adrian Galagher (AG): Can you tell us a little bit about your organisation?

Yasmine Nahlawi (YN): We are a Manchester-based non-aligned and non-governmental organization that promotes and disseminates legal education (most particularly but not limited to international law) to enable the Syrian people to work towards a Syria that is premised upon human rights and the rule of law. We do this through a combination of educational media segments (both radio and video) as well as on-the-ground training workshops, and currently focus on three main areas of public international law (PIL), international humanitarian law (IHL), and international human rights law (IHRL). Our PIL programme, for example, is aimed at helping Syrians to contextualise their situation within the wider international legal framework and to understand why and how certain measures are being imposed upon their country (for example, what is the Security Council, and what is its significance in authorising international action on Syria? What is asylum, and what does it mean to be a refugee?). The IHL programme is targeted at non-state armed groups and wider civilian population to facilitate an understanding of the basic laws of war, with hopes that such awareness will help to minimise the adverse consequences of the conflict upon civilians and state infrastructure. Finally, our IHRL programme is designed to create an understanding of the rights and responsibilities of the governing and the governed, enabling the Syrian people to hold their governments accountable for securing them their basic rights.

We operate from the premise that an informed civil society in which citizens are aware of their rights and responsibilities is most conducive for a successful post-conflict rebuilding process. We also infuse our programmes with cultural, linguistic, and religious elements to increase the receptiveness towards our work. In carrying out our work, however, we do not advocate for any specific solution, nor do we seek to impose our own vision of what should happen in Syria. Rather, our sole purpose is to disseminate knowledge of the law among the Syrian people to enable them to make informed decisions when charting the future of their country.

AG: Why do you identify yourself as a non-aligned, non- governmental organisation?

YN: Our commitment as an organisation lies to the Syrian people. A number of Syrian organisations are already working towards specified political solutions for the crisis, or, with respect to states, each is pursuing its own national interest in the country and wider region. We are not interested in engaging in the debate of what should happen in the immediate or long-term future of the country. Rather, we are keen on ensuring that the Syrian people are in a position to understand and engage with the legal issues that are most pressing to their current situation, but also to appreciate the globalised nature of the international legal order and determine what role they envision their country assuming within it. In our role as education providers, we strive to ensure that we are neutral and independent so that we can best accomplish these goals.

AG: What do you think are the key challenges facing the Syrian crisis and how are you addressing these in your approach?

YN: Primarily, the fragmented nature of Syrian society, combined with the international community’s failure to take meaningful action to alleviate the current situation, has led to the deterioration of confidence in any sort of authority, inclusive of the state, opposition groups, and international bodies (most notably the UN Security Council). This lack of acceptance or recognition of any sort of authority has severe implications for Syria’s future. It has already led, for example, to the proliferation of ad hoc legal systems (both civil and religious-based) as well as the multiplication of armed groups. It could also lead to a Libya-like scenario in which armed groups refuse to lay down weapons in the post-conflict phase, thus making it extremely difficult to establish law and order.

From SLDP’s perspective, one of our starting points in providing legal education is that we focus on the importance of the law as a necessary component of an effectively functioning state. In doing so, we aim to increase respect towards the law – not a specific body of law, but rather of law in general – so that the Syrian people realise that a cohesive legal structure remains essential to the future of their country even though they may feel let down by various legal institutions. From this basis, we proceed to educate on specific bodies of law, for example PIL, IHL, and IHRL. To ensure that our programmes reach a wide audience inclusive of all actors, we rely heavily on the media and broadcast our segments online and on mainstream Syrian television and radio channels.

AG: I would imagine that readers may be surprised to hear your statement, “We are not interested in engaging in the debate of what should happen in the immediate or long-term future of the country.” Why is this the case? Do you see yourself as more of an objective bystander that provides the people with an understanding of the law and then they can use those tools for themselves?

YN: There is already a plethora of organisations that are working towards their own visions of what should happen inside Syria. Given the volatile nature of the Syrian situation, these actors and their goals are constantly changing. They have also come under significant criticism because they operate outside the country, and have therefore been accused of being out of touch with the situation on the ground. The missing link in this whole schematic is the engagement of the people. A well-crafted and thought-out plan for a post-conflict Syria may not be successful if the Syrian population is not equipped to deal with the changes that this plan entails. Therefore, as an organisation, we are preparing the Syrian people, through education, for the legal changes that may occur in the aftermath of the conflict, highlighting the roles that they can assume within the rebuilding process. Additionally, I should note that while we do not push for any specific solution in Syria, we consistently reinforce ideals of human rights and the rule of law through our programmes with the hopes that, regardless of the system of government implemented within the country, it is built upon these two overarching principles. We will continue to promote these ideals and advocate for their inclusion at all levels of a future Syrian state.

AG: You make reference to Libya which obviously had an external military intervention and is now on calling for international assistance including potentially another military intervention. Is it this sort of scenario you are trying to avoid with your approach as you believe this should be a Syria created by Syrians?

YN: We are not necessarily trying to avoid foreign intervention in Syria, nor would we suggest that the rebuilding process can be exclusively Syrian. Rather, the support of the international community will undoubtedly be critical in getting Syria back on its feet. We of course have much to learn from Libya, and are very fortunate as an organisation to host the executive director of Lawyers for Justice in Libya on our advisory board. The scenario that we would like to avoid, however, as we have unfortunately seen in Libya, is the collapse of public confidence and trust in the state and the law amidst the transition process as well as the refusal of armed groups to lay down arms and defer to a central government. One way in which this situation can be avoided in Syria is through establishing an awareness and respect for the law and the rule of law on behalf of all actors. Of course, this will have to be supplemented with an effective governing body and legal infrastructure. In terms of our role as an organisation, we are working towards securing the former while ensuring that the latter effectively incorporates fundamental international norms relating to human rights and the rule of law.

AG: Thank you for your time.

Mark Kersten is a consultant at the Wayamo Foundation, a Senior Researcher at the Munk School of Global Affairs, and a law student at McGill University Law School. He is also author of the book, 'Justice in Conflict - The Effects of the International Criminal Court's Interventions on Ending Wars and Building Peace' (Oxford University Press, 2016).
View all posts by Mark Kersten →
This entry was posted in Guest Posts, International Law, Justice, Syria and tagged Adrian Gallagher, Syrian Legal Development Programme, Yasmine Nahlawi. Bookmark the permalink.

2 Responses to Laying the Law for a Future Syria