Big Changes in Sri Lanka, but Little Hope for Justice?

JiC is thrilled to welcome Kate Cronin-Furman for this guest-post on the potential for justice and accountability in the wake of recent – and significant – political changes in Sri Lanka. Kate is a human rights lawyer and Ph.D. candidate in political science at Columbia University. Her research focuses on international justice and accountability for mass atrocities. She is also the co-author of the blog Wronging Rights. 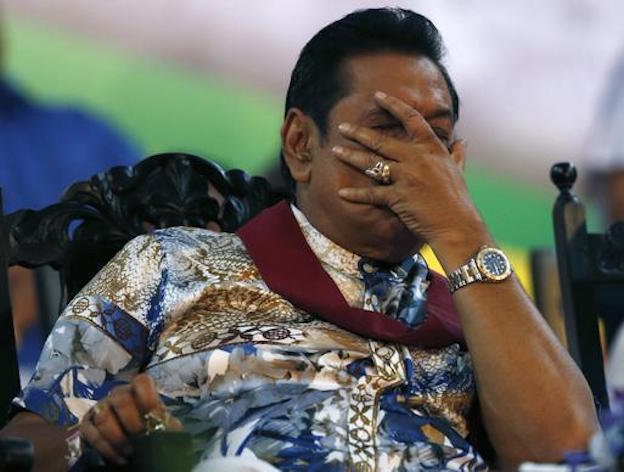 Sri Lanka’s January 8 presidential election shocked the world. The removal of strongman Mahinda Rajapaksa from office and peaceful transfer of power have triggered an outpouring of optimism about Sri Lanka’s democratic future. But on one key set of issues it’s not clear that regime change heralds progress: post-war reconciliation and accountability for international crimes committed during Sri Lanka’s long civil war.

In power for a decade, Rajapaksa had made every effort to stay there, amending the constitution to remove presidential term limits and chipping away at Sri Lanka’s democratic institutions. He installed brothers, sons, and nephews in key positions, and centralized political power in the office of the presidency. His popularity among Sinhalese voters (the majority ethnic group) provided democratic cover for this slide into autocracy. When he called snap polls late last November, a renewal of the mandate for Rajapaksa rule appeared inevitable.

Rajapaksa’s unexpected defeat at the polls was handed to him by an unlikely coalition spanning the entire Sri Lankan political spectrum. Maithripala Sirisena, the new president, was Rajapaksa’s health minister and friend before defecting along with more than 20 other ministers and MPs. His campaign promises to reign in the powers of the presidency, end the corruption of the Rajapaksa regime, and restore the rule of law struck a chord with voters. He received over 51% of the vote, and an overwhelming majority among minority Tamil and Muslim voters. Critically, the security sector upheld the result, apparently refusing Rajapaksa’s attempt to stage a coup when the election returns began to go against him.

Like Rajapaksa, Sirisena hails from the major Sinhalese community. Ethnicity and religion are deeply politicized in Sri Lanka, where Sinhalese make up nearly three quarters of the population. Sinhala Buddhist nationalism (the belief that Sri Lanka is an indivisible, Sinhalese, and Buddhist nation) is a driving force in Sri Lankan politics. Sirisena’s commitment to this ideology is a cause for concern for all of Sri Lanka’s minority communities: for the Muslims and Christians, both of whom have been targeted by extremist Buddhist violence; for the rarely-mentioned indigenous Veddas, who struggle to maintain their way of life and cultural identity; but especially for the Tamils, who endured a 25-year war in pursuit of political autonomy and are now suffering through its aftermath.

A cartoon visualizing Rajapaksa’s claim that the US sponsoring the UNHRC resolution was like “Muhammed Ali picking on a schoolboy”. (Image: The Sunday Times)

Sri Lanka’s civil war ended in 2009 with a ruthless push by government forces that destroyed the Liberation Tigers of Tamil Eelam (LTTE) insurgency. In the final months of the war, hundreds of thousands of Tamil civilians were caught between the advancing army and the retreating rebels. They were brutally mistreated by both sides; conscripted or forced to serve as human shields by the Tigers, intentionally starved and shelled by the government. A UN report estimates that as many as 40,000 of them were killed, many the victims of illegal government targeting of hospitals and declared “no fire zones”.

The aftermath of the LTTE’s defeat was ugly. In the notorious “white flag incident”, surrendering rebel leaders were executed despite assurances of their safety. Cell phone video footage (whose authenticity the Sri Lankan government vehemently contests) shows the torture, rape, and murder of countless other surrendered combatants. Those who survived were taken into government custody. Ex-combatants were sent to “rehabilitation camps”, and nearly 300,000 civilians impounded in a network of IDP camps under military guard. Some of them remained there until 2012.

International pressure for post-conflict justice in Sri Lanka has so far met with a dead end. In 2014, after several years in which the Rajapaksa regime alternated between defiant hostility and time-buying behavior, the UN Human Rights Council empaneled an international investigation. Sri Lanka refused to cooperate. The investigators were not permitted to enter the country, and individuals believed to be assisting the inquiry were harassed and intimidated.

Sirisena, who was acting defense minister in the final days of the war, has indicated that he will not move far from the previous regime’s policy on this issue. He has sworn to shield former regime members, some of whom are crucial partners in his coalition, from international prosecution. It remains to be seen whether his vague campaign promise of a domestic accountability mechanism offers more than the countless ineffectual commissions Rajapaksa created to deflect international pressure for post-conflict justice.
Sri Lanka is not a member of the International Criminal Court. There are therefore very limited prospects for prosecution of alleged war criminals without the participation, or at least acquiescence, of the Sri Lankan government. The international investigation mandated by the UN Human Rights Council will present its findings in March, but without a clear avenue towards further international action, what happens next is far from clear. Some in the international community are already recommending a suspension of accountability pressure while the new administration “gets its balance”.

A shift to a “wait and see” approach by the international community will not be welcome news to Sri Lankan Tamils or their allies in the diaspora. But justice is not their only concern. Nearly six years after the war’s end, the former war zone remains militarized. Recent human rights reports tell a story of land grabs, enforced disappearances, and constant fear resulting from the pervasive presence of the security forces. Demilitarization is an urgent priority, as is increased political autonomy. But during the campaign, Sirisena rejected demilitarization of the north on the grounds that a continued military presence was necessary to ensure Sri Lanka’s security. He also explicitly ruled out a switch from a unitary state to a federal structure granting greater power to government at the provincial level.

Despite hardline positions on these core Tamil issues, Sirisena has signaled that seeking reconciliation will be a goal of his administration. And although his political allegiances require a commitment to a unitary Buddhist state, there is still likely to be more flexibility on the allocation of political authority and the role of the military than on war crimes prosecutions. For Sri Lanka’s Tamils, this may open up an opportunity to trade some justice for peace. Last week, honoring a campaign pledge in exchange for the support of the main Tamil political party, Sirisena removed the ex-military Governor of the Northern Province. The new Governor is a civilian, a former diplomat who has spoken in favor of increased self-governance for Sri Lanka’s minorities.

There may even be room for transitional justice, more expansively defined. Under Rajapaksa, Sri Lanka had begun consultations with the South African government on the possibility of a truth commission. Most observers saw this as a disingenuous, last ditch effort to pre-empt the Human Rights Council resolution last March. But the new government could commit to it, and undertake a genuine truth-seeking process. Given the political realities that produced regime change in Sri Lanka, however, anything more than that is unlikely.

Mark Kersten is a consultant at the Wayamo Foundation, a Senior Researcher at the Munk School of Global Affairs, and a law student at McGill University Law School. He is also author of the book, 'Justice in Conflict - The Effects of the International Criminal Court's Interventions on Ending Wars and Building Peace' (Oxford University Press, 2016).
View all posts by Mark Kersten →
This entry was posted in Human Rights, International Law, Justice, Sri Lanka and tagged Kate Cronin-Furman, Mahinda Rajapaksa, Maithripala Sirisena. Bookmark the permalink.

7 Responses to Big Changes in Sri Lanka, but Little Hope for Justice?