Gabon Refers Itself to the ICC as Others Threaten to Withdraw 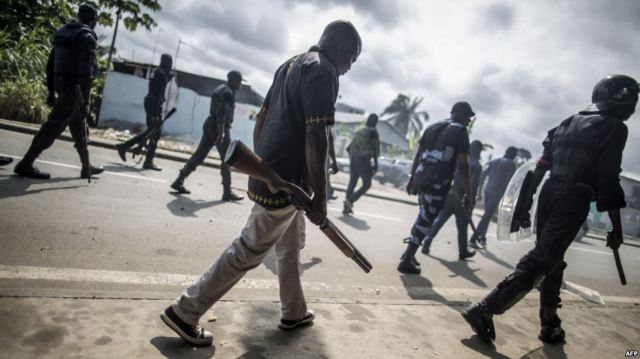 As the African Union considers its next action plan for mass withdrawal from the Rome Statute of the ICC, the Minister of State, Minister of Justice and Human Rights, and Keeper of Seals of the Gabonese Republic voluntarily referred a situation to the prosecutor of the ICC. The referral, currently being examined by the Office of the Prosecutor, will no doubt attract academic debates and criticism from African leaders who believe that the ICC is targeting Africa, as most ICC investigations are African. However, most of these situations were referred to the court by African leaders.

The referral by Gabon is a particularly surprising turn of events. Jean Ping, a Gabonese politician and a former AU Commission person, was a staunch critic of the ICC for allegedly targeting Africa. His support for ICC investigations in Gabon contradicts his previous opinion, as he now states that “We ask Amnesty International and the ICC Prosecutor to go to Gabon to bring to light the events that occurred.” It seems that some states will criticize the court when it suits them, but utilize its investigations when it is in need of assistance to hurt their enemies.

This essay seeks to address arguments of African bias which may have contributed to threats from African states to withdraw from the ICC.

Counting Down Africa’s Threats of Withdrawal from the Rome Statute

Negative perceptions about the ICC have culminated in repeated pressure by a small group of African leaders to press for African member withdrawal from the Rome Statute of the ICC. To date, those efforts have failed, with at least four failed attempts.

The first call for withdrawal was made in 2009 when Libya’s state minister for African Affairs, Abdul Salam Al-Tereyk, tried to mobilize African states who are parties to the Rome Statute to withdraw from the ICC. However, withdrawal did not take place. This is because African states parties such as the Botswana and the Democratic Republic of Congo (DRC) opposed it. Some states reaffirmed their support for the Court, either because they simply preferred suspension of the case for a year or didn’t like the fact that the agenda for withdrawal was driven by non-state parties like Libya and Sudan. At the same time, the AU Assembly also called on African states to not cooperate with the ICC in arresting and surrendering Sudanese president Omar Al-Bashir to the ICC, which has challenged the court’s ability to function effectively.

Two years later, the vice president of Kenya, Kalonzo Musyoka, traveled to South Africa and Uganda to garner diplomatic support for withdrawal ahead of the January 2011 AU Summit in Ethiopia. The Kenyan parliament accused the ICC of “Western Imperialism” and “anti-African bias.”

The Kenyan government was unperturbed by the lack of enthusiasm for ICC withdrawal. In October 2013, they again called for a withdrawal over the trial of Kenyan Deputy President William Ruto. The Kenyan government was successful in obtaining an extraordinary AU summit on the ICC. But again, no African State withdrew from the ICC. Nevertheless, these major setbacks in the attempt for withdrawal from the ICC did not lessen Kenya’s determination to undermine the ICC. In fact, these setbacks have seemed to embolden them to continue their campaign.

According to Sahara Reporters, the most recent attempt to mobilize African states was pushed by the strong willed Kenyan government and supported by Chad at the July 2016 AU Summit in Rwanda. The attempt was opposed by Nigeria, Tunisia, Senegal, Cote d’Ivoire and Algeria. In addition, Burkina Faso, Cabo Verde, the DRC, and Senegal entered reservations to the AU decision regarding a comprehensive strategy on a collective withdrawal from the ICC.

The latest decision from the AU calls for developing a road map for ICC withdrawal. In order for this to come to fruition, ministers from African States planned to meet with the Security Council to raise their concerns. The success of the meeting is to determine whether or not African states would pursue ICC withdrawal.

Recent media reports indicate that the senate of Burundi has passed a bill which was signed by the president on October 18, 2016 to withdraw from the ICC. However, Burundi hasn’t yet written a letter to the Secretary General notifying him of withdrawal from the ICC. In Kenya, According to local NGOs, the International Crimes (Repeal) Bill of 2015, signifying the country’s decision to withdraw, is in the stages of editing and approval. Namibia’s ruling party, the South West Africa People’s Organization (SWAPO), also threatened to withdraw from the ICC in 2015, the decision to withdraw was approved by cabinet. However, in 2016, the Minister of International Relations and Cooperation, said withdrawal isn’t a priority. While South Africa’s ruling party, the African National Congress ( ANC) also threatened to withdraw the country from the ICC in 2015. Time will tell if any of these initiatives will in fact materialize.

The UN Security Council has been a major playing-field for Africa-ICC tensions. For years, the AU has felt ignored and frustrated that the Security Council hasn’t postponed investigations against Sudanese president Omar Al Bashir. This frustration is best captured in the words of Ping, “if you don’t want to listen to the continent, as usual, we also are going to act unilaterally.” In many ways, the animosity of the AU to the ICC is more about problems with the UN Security Council than with the ICC itself.

On February 12, Erastus Mwencha, Deputy Chairperson of the AU Commission, wrote a letter to Rafael Dario Ramirez Carreno, president of the Security Council that month, informing him of a working visit by members of the Open-ended Committee of Foreign Ministers on the ICC (the Ministerial Committee) to the Council sometime in March 2016. The Ministerial Committee wanted to meet with the Council to raise these concerns: head of state immunity, Rule 165 of the ICC Rules of Procedure and Evidence, suspension of proceedings against Al Bashir, offenses against the administration of justice at the ICC, and the Draft Action Plan on Arrest Strategies.

On 11 April 2016, Liu Jieyi, the Security Council president that month, replied to Mwencha’s letter and indicated that the Council agreed to meet with the Committee and he would like to have the “name and contact details of a point person to liaise with the Security Council Affairs Division regarding a date for the meeting.”

Attempts were made to set up meetings in May and June. However, the meetings were either postponed or didn’t take place due to “unavoidable circumstances” on the part of the AU. It has not been possible to ascertain what the “unavoidable circumstances” were scheduling problems on the AU side may have been an issue. Eventually, the ministerial committee and the Security Council agreed to meet on September 23, 2016, during the High Level Week (HLW) of the UN General Assembly (UNGA). This meeting was cancelled before it even started.

Three Reasons Why the Meeting was Cancelled

Second, the Committee of five ministers from Africa felt that the composition of the delegation members of the Council wasn’t at the appropriate level, because only low ranking personnel from the Security Council member countries attended.

Third, supporters and critics of the Committee seem to agree that the Committee wanted the meeting cancelled so that they could state that they were never given an audience and that they were ignored by the Security Council. The meeting was set during the busiest time of the year, which made it less likely that ministers of Security Council member states would be able to attend and that a full agenda could be set.

To foster a meaningful relationship between the AU and the ICC, the two entities must continue to talk with each other. It is worth noting that during the 71st Session of the UNGA, Ms. Pelonomi Venson-Moitoi, Minister for Foreign Affairs of Botswana, urged other states parties to the ICC to dialogue with African states, stating that it doesn’t serve any useful purpose for African States to pull out of the ICC. Ms. Venson-Moitoi continued by stating that states parties should think about amendments to the Rome Statute, though she provided no specific examples of amendments. She also reminded delegates of the importance of the ICC and its main aim, which is to fight impunity and protect victims.

Since the Security Council doesn’t have the mandate to deal with Article 70 cases or amendment issues, the ministerial committee should identify the proper forum for African states parties to raise their concerns on these issues and on others. It is useful to note that two of the AU’s proposals for amendments to the Rome Statute are before the working group on amendments. African states parties should actively participate in the group’s meetings so that these amendments reflect their concerns. Furthermore, African States must come to the table with open minds, must be willing to listen, and implement what is agreed. This includes acknowledging that some amendments will not (and should not) gain consensus, including allowing immunity for heads of state and other high level officials before the ICC. Such a provision would undermine fundamental principles and objectives underlying the ICC.

Meanwhile, African nations can use the concept of complementarity to put cases beyond the jurisdiction of the ICC. If the justice system of every African country is strengthened, governments can have domestic prosecutions and limit the ICC’s involvement in Africa. The Hissene Habre trial at the extraordinary African Chambers and the ongoing trial of former Lord’s Resistance Army Commander, Colonel Thomas Kwoyelo before the International Crimes Division in Uganda are examples of African states fighting impunity at home.

The ICC must do a better job at debunking lies, rather than shying away from appearing defensive. One positive example of the court debunking lies and misinformation was the Statement of the Prosecutor correcting assertions contained in article published by The Telegraph.

But of equal or greater importance is the role of African ICC states parties in defending African membership in the ICC. On this front, times may be changing in Africa. At one time, Botswana was the lone African voice that supported the ICC, and was accused of supporting a non-African agenda as a result. However, recent developments at the 27th Session of the AU Summit in Rwanda indicate that while some states want African states parties to leave the ICC, other states know that it is their sovereign right to leave or stay on their own volition.

After the summit, the Nigerian foreign minister was quoted saying:

Some countries felt that since the accession to the treaty establishing the ICC was undertaken by countries on an individual basis, that it did not make sense for there to be a collective withdrawal, that if any country that acceded was not happy with the way the court is being run, then there should be an individual withdrawal as it were. Also, they believed that if there are changes that you could try and affect them within the court. Almost half of the AU member states are not parties to the Rome convention establishing the ICC, it doesn’t make sense that they should be party to a movement to get those who had acceded to withdraw collectively.

Such statements are important and needed far more frequently by more African leaders.
The AU isn’t a state party to the Rome Statute, and cannot dictate what African states parties do or don’t do. Talk of withdrawal should be dropped in favor of meaningful dialogue that will improve the court’s operations.

Last but not least, the voices of victims are lost in discussions of targeting Africa and head of state immunity. If states pull out from the ICC, a key avenue of justice for millions of people will be lost. The ICC has important ways to go to become a highly effective institution, and it needs engagement and support to achieve that reality.