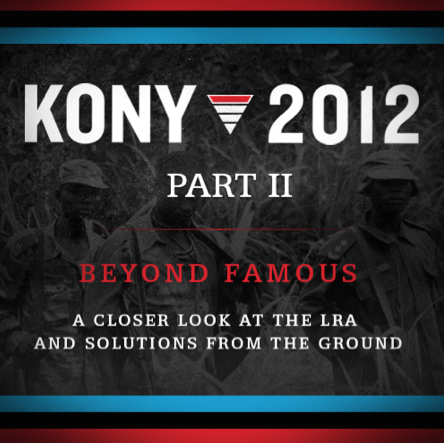 One month ago the US based organisation Invisible Children published their Kony 2012 video, campaigning for the arrest of Ugandan rebel leader Joseph Kony. The video went viral to an extent never witnessed before. Many people who had not heard about the LRA and Joseph Kony before started to get engaged with the topic and suddenly took interest in events thousands of miles away. Designed as a 30 minutes advocacy flick, the movie naturally also encountered a lot of criticism for the way in which the video chose to present the situation, for the oversimplification of the LRA conflict in general, as well as the lack of voices from people living in the affected areas. You can find JiC posts that were quite critical with the video here and here. As I have previously described, some of the criticism became as oversimplified as the original movie when internet critics and mass media started picking apart the organisational and financial structures of Invisible Children and people started accusing the organisation of making money off the misery of Africans. Another unfortunate event was the mental breakdown of Invisible Children co-founder and Kony2012 producer Jason Russel that diverted much of the media coverage that should have focused on the LRA conflict and its background.

Today Invisible Children launched part 2 of their Kony2012 video, entitled ‘Beyond Famous’. It puts the organisation’s advocacy approach and Kony2012 into perspective and explains the rest of the strategy that Invisible Children is propagating in order to end the LRA conflict. In doing so it addresses many of the concerns critics have brought forward and gives a lot more space to the voices of people living in areas formerly or currently affected by the LRA violence. With close to 20 minutes it is also a bit shorter than the last video which will hopefully help to ensure that as many people as possible watch it until the end. On a personal note, I still do not like the style of the video. Like the first part it aims at the gut without giving enough food for thought and tries to transport a ‘we can change the world’ attitude that I find naïve and dangerous. The unreflected and self-gratifying mass activism that is promoted in the video goes against my ideal of enlightened and critical citizens, but if that is what is needed to get people interested in the topic, so be it. Still, after having seen some of the old videos Invisible Children is producing with donations, like this High School musical, I would strongly advise you to rather give your money to World Vision, War Child or any other organisation that is doing humanitarian work in the area.

There are still some minor issues with the video: It lacks any discussions about the dangers a military approach in the region might harbour, it doesn’t mention the human rights violations the Ugandan government has been acused of, and it is one-sided in not giving screen time to the critics of military approaches in the region who do exist. Yet, this is an advocacy video, and it wouldn’t make a lot of sense to criticize it for not giving the full picture, after all its aim is to mobilize the people in favour of one particular approach – military intervention. The video also implies that Kony2012 helped to coordinate a regional African response to the LRA which is wrong since African Union plans to create a joint brigade have existed for months and the US has been working on facilitating this cooperation for at least as long.

That said, the video intelligently addresses the most common criticism brought forward against Kony2012 both in its arguments as well as in its presentation. I kept asking myself why they hadn’t included some of these facts in the original video instead of wasting long minutes on trying to make Invisible Children and the people behind it look cool. The video explains that capturing Kony is only part of a broader policy that is detailed in this letter by the people behind Kony 2012 to President Obama. Most importantly the video clarifies that reconstruction and development in the areas affected by the LRA has to be part of a comprehensive solution, that civilian protection also needs to be ensured, and that methods to ensure a safe defection of LRA fighters have to be implemented. If you want more information on the military approach that Kony2012 advocates as well as its pros and cons check out my discussion with Resolve Executive Director Michael Poffenberger in the comments of this post, or my update on the US deployment in Central Africa here.

An LRA victim in one of the areas currently affected by the rebels. Both the original Kony2012 video as well as the media response practically ignored the current victims (Photo: discoverthejourney.org)

Apart from straightening out some factual mistakes and giving more context, the second video also made the smart choice to include as many voices from DRC, South Sudan and the Central African Republic as possible. It was one of the biggest mistakes, both of the original video as of most media reactions, to not ask the actual victims of the LRA, the people in CAR, DRC and South Sudan who are still suffering from LRA attacks. The producers of Kony2012 are partly responsible for this neglect due to their very debatable focus on northern Uganda in the first video. Apart from including at least some voices from those areas, the second video was also mindful of attempting to depict ‘mixed crowds’ including activists and IC employees of all skin colours in order to counter allegations of furthering a ‘white savior complex’ or neocolonialism. My personal hope is that as many people as possible who have seen the first part and did not search out any additional information on the conflict will see the second part of Kony2012 and get a fuller picture of the situation on the ground. It would also be nice to see some more informed discussions about the LRA conflict and the limits and chances of a military intervention in the media based on that second video. Everybody advocating for military interventions in foreign countries should be very mindful of one thing though: it is easy to call for a stronger and more sustained military intervention to arrest Kony, but if things go wrong it will be the people on the ground who suffer the consequences, and you will still be having your scrambled eggs and bacon at your breakfast table.