Innovating Justice: The Mobile Apps Aiming to Transform How We Respond to Situations of Mass Atrocity 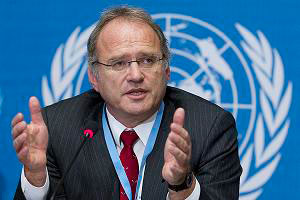 International criminal courts have often been a source of inspiration for technological innovation. At Nuremberg, the trial of the leading Nazis was facilitated by the creation of a pioneering interpretation machine by IBM, which enabled the simultaneous translation of the proceedings into English, Russian, French and German. In addition, the prosecution took the unprecedented step of relying on a documentary film, Nazi Concentration Camps, to provide a visual register of the unimaginable atrocities that had been perpetrated under Nazi rule.

Fast-forward seventy years, however, and the field of international criminal justice is struggling to keep apace with the lightning speed at which new information and communication technologies (ICTs) have been developing. In 2010, Philip Alston, then-UN Special Rapporteur on Extrajudicial Executions, observed that the use of ICTs in human rights work was “only at a nascent stage”. In a new report released in April this year, Alston’s successor Christof Heyns revealed that the full potential of these new technologies is still yet to be systematically investigated or internalised by the human rights community.

Nonetheless, recent evidence suggests that the tide may be beginning to turn. Initiatives such as the Satellite Sentinels Project and Amnesty International’s Eyes on Darfur campaign have begun to reveal both the possibilities and limitations of leveraging the power of high-resolution satellite imagery to document and deter the commission of atrocities in Sudan. Similarly, in response to the 2007-08 post-election crisis in Kenya, the Ushahidi crowdsourcing platform was created to visually map the violence by accumulating reports submitted by Kenyans from all around the country via text or email. As these developments suggest, the age of digital humanitarianism has very much arrived and the field of international criminal justice is beginning to take note.

Arguably one of the most revolutionary technological developments of recent years has been the rise of smartphone applications. Recognising the potential of these new technologies, a range of organisations have been hard at work developing humanitarian apps that aim either to enhance the documentation of atrocities or raise awareness of applicable legal frameworks. With these developments in mind, this post takes a closer look at three humanitarian apps that are currently under construction or have recently been launched. After providing a brief overview of how each app works, the post concludes with a discussion of some of the risks that may arise from their deployment in practice.

Mass atrocities are reported and documented not just by NGO workers and journalists, but also by thousands of “civilian witnesses”. Traditionally, civilian witnesses have been reliant on professionals to collect their evidence and disseminate it to relevant fact-finders. In recent years, however, civilian witnesses have been transformed into digital witnesses, empowered to record visual and auditory information on their mobile phones and disseminate it directly to a global audience through social media platforms such as Facebook, YouTube and Twitter.

In this era of digital witnessing, international criminal prosecutors have experienced considerable challenges in verifying the credibility of images and videos that have been uploaded to social media channels.

Responding to this challenge, the International Bar Association (IBA), in collaboration with LexisNexis, has launched eyeWitness to Atrocities, a new app that enables users to take photos and record video footage whilst automatically collecting GPS coordinates, date and time stamps, device sensor data, and surrounding objects such as Bluetooth and Wi-Fi networks. The app has been specifically designed to securely create a chain of custody record, as well as record hash codes and pixel counts, in an effort to verify that the footage has been neither edited nor digitally manipulated.

The user can submit the footage directly from the eyeWitness app to a database maintained by LexisNexis, where it is stored in a secure repository that functions as a virtual evidence locker, safeguarding the footage for future investigations and legal proceedings. The user also retains the option of uploading the footage to social media.

Realising that some witnesses may have their phones seized and examined by hostile forces, the app also includes a “panic button” that enables the user to delete all traces of the recorded information as well as the app itself from their mobile phone.

Along similar lines, Physicians for Human Rights (PHR) is currently developing MediCapt, an app that seeks to help clinicians collect, document, and preserve forensic medical evidence of sexual violence to support the local prosecution of these crimes.

In many conflict zones, paper medical intake forms often produce inconsistent, illegible, and incomplete reports that are prone to be dismissed by courts. MediCapt replaces these paper documents with a digital form combined with a secure mobile camera to facilitate forensic photography. Health care professionals can use the app to compile medical evidence, photograph injuries, and securely transmit the data to relevant local authorities responsible for investigating such crimes.

To date, two pilots have been conducted in Bukavu, Democratic Republic of the Congo, the intention being to scale MediCapt for use in North and South Kivu provinces as well as other areas where mass atrocities are widespread.

On a completely different register is Fighter, not Killer, an app recently launched by Geneva Call. Geneva Call’s mission is to work with armed non-state actors (ANSAs) in an effort to convince them to respect norms of international humanitarian law (IHL). Based on its realization that many armed fighters use smartphones even in very remote areas, Geneva Call developed an app that aims to spread knowledge about IHL through the form of an interactive quiz.

Rather than asking theoretical questions, the app presents users with a scenario and then asks whether a particular course of action would be permissible. Answer a sufficient number of questions correctly and users are able to access an additional Commander Level, where the scenarios become more intricate. Most of the scenarios are based on real-life questions that have been posed to Geneva Call by ANSAs during their outreach in the field. Although the questions are presented to allow yes/no answers, a more detailed explanation (and sometimes, qualification) is then provided once an answer has been selected.

Mobile apps that seek to enhance the documentation and deterrence of mass atrocities are still at an early stage of development but the field is growing, not least through the advent of competitions such as The Tech Challenge for Atrocity Prevention. Yet, with new opportunities come novel challenges. As Christof Heyns recently cautioned, “the development of ICTs should not be viewed as an unqualified good”. As stakeholders become more acclimatized to the possibilities of new technologies, it is equally important that they confront the risks that may arise from their deployment.

Apps containing information about legal frameworks can be useful educational tools, especially if they are presented in interactive and easily accessible formats. Such apps carry few inherent dangers, other than the risk of being out-of-date or incomplete, a risk they share with traditional printed sources.

Apps that facilitate the collection of evidence demand greater caution. Where they explicitly target experts, such as PHR’s MediCapt aimed at trained clinicians, they have the potential to be immensely helpful in the compilation of evidence.

However, where apps are marketed to the general public, it is important to ensure that users are sufficiently aware of the risks to which they may be exposed in seeking to document evidence in practice. Civilian users, especially if led to believe that the information they record may be used in accountability proceedings in the future, may be incentivized to take greater and at times unacceptable risks to capture relevant footage in violation of the “Do no harm” principle, a principle that has been recognised to be of paramount importance in the field of human rights monitoring. In this regard, whilst features such as the panic button incorporated into the eyeWitness app are both innovative and laudable, significant efforts will be required to raise awareness of the risks civilian witnesses might be taking when using such apps in practice.

Looking ahead, it is safe to predict that opportunities to use digital technology in response to mass atrocities are only likely to increase. With such trends in mind, the international criminal justice community will need to think carefully about how these new technologies can be utilised in such a way as to harness their potential whilst minimising their risks.

3 Responses to Innovating Justice: The Mobile Apps Aiming to Transform How We Respond to Situations of Mass Atrocity