“Let’s Ditch War Crimes”? Let’s Not Get Carried Away with Justice Criticism and Cynicism 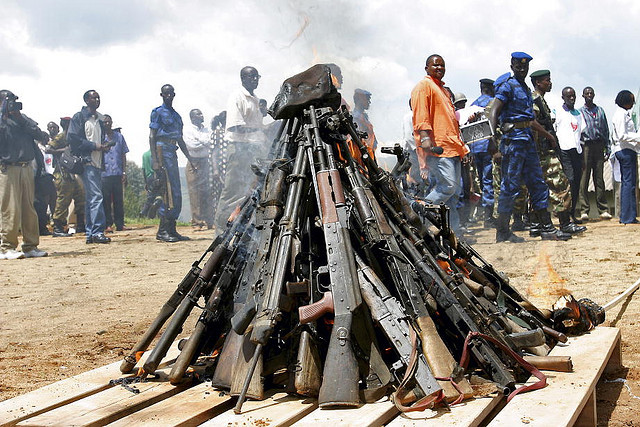 Weapons being burnt during the official launch of the Disarmament, Demobilization, Rehabilitation and Reintegration (DDRR) process in Muramvya, Burundi. Burundian military signed up voluntarily to be disarmed under the auspices of United Nations peacekeepers and observers.
2/Dec/2004. Muramvya, Burundi. UN Photo/Martine Perret. http://www.un.org/av/photo/

Common criticisms and cynicism of international justice, and the International Criminal Court specifically, are frustrating as they tend to obscure reality, misunderstand both the limits and possibilities of accountability norms and institutions, and misdirect blame away from states whose cooperation and compliance is essential for ensuring accountability for atrocity crimes.

The arguments presented here in “Let’s Ditch War Crimes”  are typical in these respects: justice for the “big fish” has no deterrence effects; trials take too long and are not worth the cost; and our money is better spent on local justice. These criticisms are partially valid, but require some nuance and correction as they reflect a broader debate in the public domain about how to make international justice matter and work.

On deterrence, it depends.

It’s true that Karadžić’s and others’ convictions have not deterred Bashir, Kony, or Assad–all unrelenting and unrepentant perpetrators of atrocities. But few have ever claimed that successful convictions of top leaders can achieve the specific deterrence of crimes by others, particularly when such crimes are already taking place. Rather, there is a greater likelihood that international justice can achieve general deterrence of atrocity crimes by would-be perpetrators, especially in regions where the ICC has jurisdiction.  Both Kate Cronin-Furman and Beth Simmons and Hyeran Jo have done important work providing the nuance and empirical evidence of deterrence effects.

Are the big fish worth it?

Apprehending and prosecuting the likes of Radovan Karadzic (former Bosnian Serb political leader, known as the “Butcher of Bosnia” for crimes like genocide in Srebrenica), Laurent Gbagbo (former President of Cote d’Ivoire, accused of orchestrating ethnic and political violence after he was voted out of power), and Dominic Ongwen (former child soldier turned LRA commander accused of mass atrocities in Northern Uganda), are big wins for international justice in political and symbolic ways. And often, as the author points out, we have to wait a long time for arrests, trials, and it all costs a lot.

It is equally, if not more important, to ensure accountability for mid and lower level perpetrators. These are the perpetrators whose impunity affects the social fabric of post-conflict societies.

“Massive amounts of time and money are directed at a tiny handful of war criminals, while hundreds of others go about their daily lives unpunished…Here’s an idea: Let’s put the billions we’ve spent on international tribunals into local courts, where lawyers and judges know the context better, and which are “often in bad shape at the end of the conflict,” as Baylis says.”

But international and local justice are not an either/or scenario.

First, we can’t replace international justice with more local justice. The “big fish” are unlikely to ever see the inside of a local courtroom as long as they have connections to power (e.g. President Alassane Ouattara of Cote d’Ivoire, President Kenyatta of Kenya, President Kagame of Rwanda, etc.). If they ever lose power, the new regime isn’t likely to give them a fair trial. Neither Simone Gbgabo, former first lady to Laurent Gbagbo, nor Saif Gaddafi, son of the former Libyan dictator, have received fair and impartial justice in their home countries. In in both cases, justice advocates have called for their transfer to The Hague.

Domestic courts are also rife with their own problems, such as lack of capacity, compromised impartiality, and politicization. For example, the Cambodian tribunal (ECCC) has suffered enormously from political interference and a limited prosecutorial strategy.

Second, as the ICC pursues its mandate to prosecute the “big fish”, it has limited means to affect “positive complementarity” so that local level prosecutions are possible and fair. But there are many NGOs, states, individuals working to provide such assistance, and more is needed.

Finally, the costs of ICC and ad hoc tribunal trials are paltry compared to all the other stuff we throw gobs of money at, arguably for less noble purposes. (See page 77 of this report by the Leitner Center for International Law and Justice.)

As I see it, international justice has three persistent political problems (with its existing cases):

If Bashir, Kony, etc. are not in the dock this is not a failure of the ICC but a failure of states parties to live up to their Rome Treaty obligations to arrest such individuals, and a failure of the UNSC to use its limited punitive tools to enforce such compliance in some cases. The recent furor over Bashir’s visit to Uganda to witness Museveni flout his own impunity and not-so-democratic rule perfectly illustrates this problem. Unfortunately, the Court itself has no means to coerce compliance from states parties. And the UN Security Council has been a fickle friend of international justice.

“Pointing out that all but one of the ICC’s inquiries have involved African nations, some countries are threatening to pull out, accusing the tribunal of racism.”

The ICC suffers from the misperception that it is biased against Africa. On the one hand, this narrative has been primarily cultivated by African state leaders who would like to protect their own impunity. On the other hand, it’s hardly surprising that civil society and victims in the DRC, Uganda, Cote d’Ivoire, Kenya, Libya, etc. feel disaffected by international justice. There are many ways to rhetorically counter this misperception but justice advocates and the ICC could do more to prevent it from trickling down from state leaders to violence- affected communities. And the ICC needs to take it more seriously too–not by selecting non-African cases for the sake of it, but by improving outreach and communications.

“Positive complementarity” has arguably only worked in Colombia, and that was largely under threat of an ICC intervention. If the international community can provide more funding, technical assistance, and advocacy for state and local level justice, this not only closes important impunity gaps where it matters most but increases the local buy in for international justice norms. The trick is to make sure that such local justice is impartial and provides the kind of accountability that accords with victims’ needs.

2 Responses to “Let’s Ditch War Crimes”? Let’s Not Get Carried Away with Justice Criticism and Cynicism