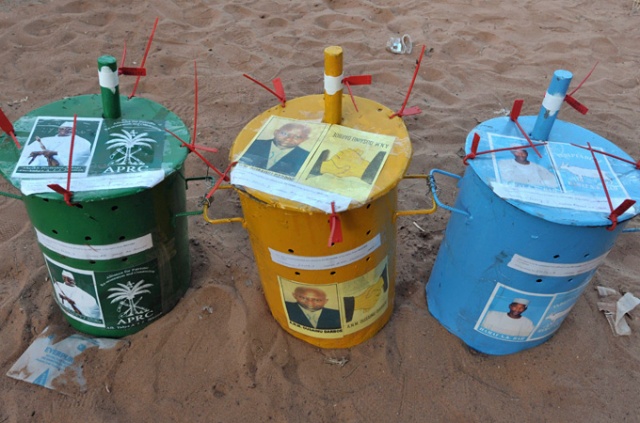 Canisters in which voters in The Gambia drop marbles to indicate their political support (Photo: AFP)

In a development that has sent shock waves of surprise across the world, Yahya Jammeh has accepted defeat following presidential elections in The Gambia. Many expected Jammeh, who once claimed he was prepared to be in power for a “billion years” and who has ruled The Gambia for the last twenty-two years, to do everything possible to hold onto power. It remains unclear what, exactly, convinced the Gambian president to accept the election results and peacefully hand over power to his rival Adama Barrow. But for the International Criminal Court (ICC) and its supporters, Jammeh’s retirement from the presidency is very good news.

Last month, The Gambia joined South Africa and Burundi in notifying the United Nations Secretary General that they intended to withdraw from the ICC. At the time, Jammeh invoked particularly colourful language in deriding the Court as an “International Caucasian Court for the prosecution and humiliation of the people of color, especially Africans.” The Gambia’s intention to withdraw put the ICC in a particularly awkward position because the Court’s chief Prosecutor, Fatou Bensouda, hails from the country and was previously Jammeh’s Justice Minister. Had twelve months passed (the time it takes for an ICC withdrawal to take effect), the ICC chief Prosecutor would have hailed from an non-member state. But it seems that the Court may not have to worry after all.

Earlier this week, incoming President Barrow, who incidentally was a security guard at a London-based retail chain, pledged to keep The Gambia in the International Criminal Court:

We will ensure that we respect all international agreements we are a signatory to and we will take the country back to the Commonwealth and the International Criminal Court.

The ICC and Commonwealth and other international institutions are advocating for good governance – if you are doing that why should you fear.

According to the BBC, Barrow has now confirmed his intention to keep that promise.

While it has never happened before and there is no precedent to follow, it should be assumed that all that is required to keep The Gambia a member of the ICC is an executive decision to withdraw the country’s notice of withdrawal. So what will this mean for the ICC and for the alleged ‘exodus’ of states seeking to leave the Court?

On Twitter, Geoffrey York asks what a decision to remain in the ICC would mean for the movement to push African states to withdraw from the Court. Pierre Nkuruniza’s Burundi and Jacob Zuma’s South Africa are undoubtedly an odd couple to lead the push for African states to exit the ICC. For the time being at least, it seems unlikely that others will join them. So if Barrow does make good on his pledge to keep The Gambia in the ICC system, it would take a lot of wind out of the sails of the anti-ICC movement. Does South Africa double down and put pressure on others to join it in withdrawing from the ICC? Or is it content to go it alone with Burundi?

One thing no one should expect is for South Africa itself with withdraw its withdrawal from the ICC because of Barrow’s position. It is possible that The Gambia’s decision to remain a member of the Court raises both the cost of others to exit the ICC as well as the cost of South Africa remaining a member, insofar as it be seen to be influenced by political decisions of other states. As I argued recently, for the South African government to reconsider its withdrawal from the ICC, it not only needs to save face, but needs concessions from ICC member-states that would allow it to tell a ‘winning story’.

Finally, Barrow’s intention to keep The Gambia in the ICC once again exposes the lack of unanimity among the political class in Africa when it comes to the ICC. Barrow clearly believed that maintaining his nation’s membership in the ICC was important enough to make it a campaign promise. That’s no small thing for an institution often dismissed as irrelevant. If nothing else, The Gambia’s initial decision to withdraw from the ICC and its current intention to now remain shows that the Court does matter and it does resonate.