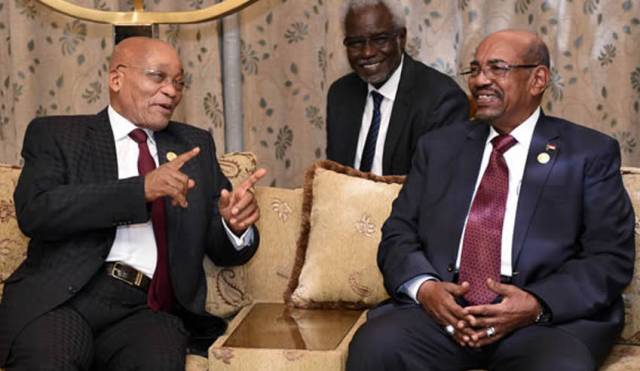 Presidents Zuma and al-Bashir meet in Khartoum in 2015 (Photo: DoC)

It came as quite the surprise. To be sure, observers of South Africa’s relationship with the International Criminal Court (ICC) fully expected that the Court’s Judges would eventually find that Pretoria had failed to cooperate in arresting and surrendering Sudanese President Omar al-Bashir to The Hague when he visited in 2015. But few could have guessed that the Court’s Judges would decide that no further action was necessary, that South Africa would not be referred to either the United Nations Security Council nor the ICC’s Assembly of States Parties (ASP) for additional sanction.

Some view this decision as a betrayal of justice, a finding of criminality without punishment, and a legally precarious proposition. The most cogent and eloquent critic of the ruling, Angela Mudukuti, has argued that “it may do the ICC more harm than good as far as being taken seriously as a legal institution”. In this post, I will argue that the ICC’s decision was, in fact, good politics and law, and that it remains unclear, at best, whether it will hurt the institution.

Firstly, the core of South Africa’s concerns with the ICC remains unsettled. This is far too often and too easily overlooked. Human rights and international justice advocates rightly want to see al-Bashir held to account for atrocities committed in Darfur. However, while South Africa clearly had obligations to arrest Bashir (which was made clear in successive court rulings in the country), it is not clear whether ICC member-states have an obligation to do away with the immunity of heads of state of non-member states like al-Bashir of Sudan. Even when the UN Security Council is involved and refers a non-member state of the ICC to the Court, the legal consequences of such a referral are debatable. This debate is often caricatured as one between proponents of justice and advocates of impunity. But the legal scholars and diplomats concerned with the legal status of head of state immunity of non-member states are not endorsing impunity. They are recognizing a reality: that states and courts have been purposefully ambivalent on this issue and it thus remains unsettled. It does not push the accountability ball forward to neglect this fact. It would be better, as that some observers (including myself) have previously argued, to refer this issue to the International Court of Justice.

Second, a concern among critics of the ICC’s ruling is that a “message has been sent to all states parties: non-compliance has no consequences.” But is it really the case that South Africa has faced no consequences? While South Africa has not been punished or sanctioned by the ICC, it has faced numerous consequences, both domestically and internationally as a result of its decision to host al-Bashir. Pretoria has had to explain itself to the international community and to its own citizens on innumerable occasions and do so very publicly. It has also had to muster legal reasons for its actions.

Indeed, an all-too-apparent consequence is that South Africa has engaged the Court on the issue of head of state immunity. The form and substance of that engagement will never satisfy those who only see one outcome as appropriate: full legal compliance from Pretoria, punishment of the South African government, and the surrender of al-Bashir to the ICC. And fair enough. But what South Africa has done is, nonetheless, engage to the ICC throughout this process. As Allan Ngari rightfully points out: “South Africa has engaged constructively with the ICC, proposing procedures that states parties should take when consulting with the court on cooperation requests.” Moreover, part of the reasoning of the Judges in not referring South Africa to the ASP or Security Council was based on their acknowledgement of South Africa’s positive engagement with the Court. That can’t be said for many, indeed any, member-states that have previously hosted al-Bashir.

A third issue pertains to expectations. There exists a broad consensus that the expectations that the ICC and its proponents set for the Court were unrealistic. The result has been an enormous expectations gap, one which the institution seems to only be recovering from recently. In this context, it seems unfair to insist that the ICC unduly raises expectations whilst simultaneously pillorying decisions that reflect realistic expectations. In this case, the ICC judges determined that referring South Africa to the Assembly of States Parties or the Security Council was futile because neither the ASP nor the Security Council would do anything about it. This is undeniably true and matches the exact expectations that should be held of both of these bodies.

This brings me to a fourth point. There is something of an underlying assumption that a referral of South Africa to the ASP or the Security Council would help to deliver justice for crimes committed in Darfur or, at the very least, be in the interest of victims. But we simply do not know how victims feel about the ICC’s decision regarding al-Bashir and South Africa. What we do know is that they are fed up with the dithering legal process that once promised them justice and has delivered zilch. We know this because, two years ago, a number of them withdrew from the case against Bashir, citing “the inability to advance the prosecution of the al-Bashir case since 2009 and in light of the Prosecutor’s decision to suspend “active ”investigations into the Darfur situation in late 2014”. Would referring South Africa to the ASP or the Security Council help? No, because on every occasion when the ICC has done so previously, it has fallen on deaf ears, leaving the Court looking impotent and the prospects of justice even more remote. The ICC’s Judges seem to have employed Einstein’s definition of insanity in their judgement; it made no sense to refer yet another state to the ASP or Security Council and expect an entirely different result.

What is surely to be of more relevance to victims and survivors than a referral of South Africa to the ASP or Security Council is the fact that the ICC’s investigation into Darfur is no longer hibernated and has been active in 2017. This is, coincidentally, most likely due to the fact that, while al-Bashir was never surrendered to the ICC, his visit to South Africa was the closest he ever came to being arrested and shipped off the Court.

The crucial task of finding common ground remains. The spectre of South Africa withdrawing from the ICC is still real, as some members of the South African government have made clear. As I have argued previously, this time should be treated as a period of bargaining and negotiation. The ICC judgement offered two crucial ‘olive branches’: first, the decision not to refer South Africa to the ASP or Security Council; and second, the offer to South Africa to appeal the ruling, an unprecedented move for this sort of ruling. If South Africa now withdraws from the ICC, it will be virtually impossible to say that the Court did not try to understand its concerns, take them into consideration, and exhibit leniency towards the government.

The conversation must continue. In this context, its worth highlighting that South Africa has chosen not to appeal the ICC’s decision. Some may see this as acceptance of the Court’s ruling. But it also means that South Africa has now chosen to end its engagement with the ICC’s chambers. Now more than ever, a sensible and pragmatic approach that bridges South Africa’s legitimate concerns with the need to strengthen the prospects of justice and accountability for victims of survivors in Darfur and elsewhere, is desperately needed.