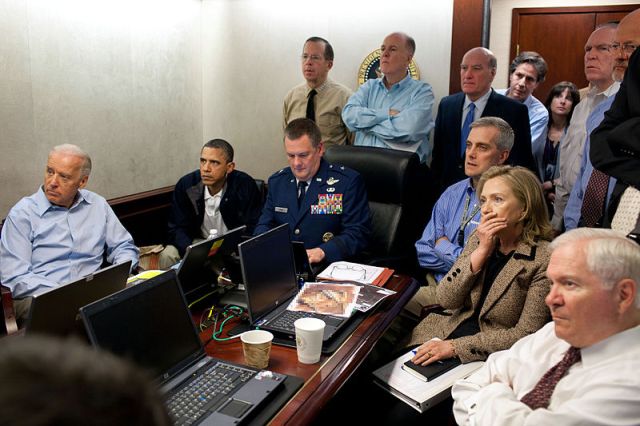 US officials including President Obama, VP Joe Biden, Secretary of State Hilary Clinton and Secretary of Defense Robert Gates watch as the bin Laden mission unfolds. The mission was to kill bin Laden, not to capture him.

A debate regarding the legality of killing Osama bin Laden is raging across the internet. Everyone wants to know: was the assassination of bin Laden in accordance with international law? Yesterday, I weighed in on the broader question of whether it was in fact an act of “justice” to kill bin Laden.

It strikes me that if assassinating bin Laden was, in fact, illegal (note there is no consensus on this question), then the prescription that follows would be that the US should have captured, detained and subsequently tried bin Laden for violations of international law.

Lindsay Beyerstein sums up the views of those uncomfortable with the assassination who would have prefered that bin Laden had been brought to trial:

I see his killing as a lost opportunity to capture and try him…Americans have just decided that it’s okay to kill suspects without trial if it seems obvious enough that they’re guilty of terrorism.

This post is an attempt to think through the kinds of issues that a trial of bin Laden would encounter. While there is no doubt an argument that putting bin Laden on trial would better serve the interests of justice than his assassination, it is not entirely clear just how “just” such a trial would be. Human rights expert, Joe Hoover, for example, commented that there is a need to be skeptical about what trials of this nature can offer:

“trials, especially international ones, are political acts and the desire to legalise the act of holding to account, of delivering justice, is hardly innocent or unproblematic.”

In what ways would a trial be problematic? I suggest four major challenges that a trial of bin Laden would have had: its fundamentally political (rather than impartial, judicial) nature, the question of where his trial would have taken place, which crimes would have been adjudicated, and, more practically, the cost of trying him. In the end, the debate about justice that has been instigated by bin Laden’s death is critically important for how we conceive of justice and the legitimacy and appropriateness of future action against individuals like bin Laden.

Would bin Laden have received a fair trial? If justice was to be served and achieved by a trial, impartiality would have been absolutely necessary.

Greg Barns, a former Australian MP, writes that, if the leader of al-Qaeda had been put in front of a tribunal,

“Bin Laden could then have been tried according to law and given all the resources that every human being is entitled to in defending themselves against criminal charges.”

It isn’t entirely clear, however, that bin Laden would have been given all those resources. For example, individuals being prosecuted are granted the benefit of the doubt: they are assumed innocent until proven guilty. I don’t think it is controversial to maintain that bin Laden would have undoubtedly been presumed guilty. In 2001, when the Taliban offered to hand over bin Laden to a third country for trial, President Bush replied:

While bin Laden’s responsibility in terrorist attacks is clear, even by bin Laden’s own admission, with regards to the standards of international criminal law, he would have had to be presumed innocent nonetheless. 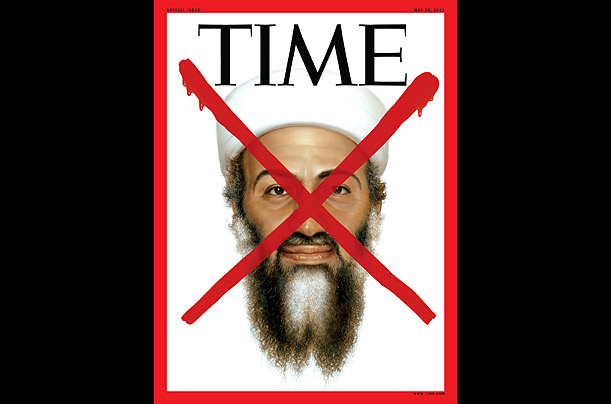 The upcoming cover of Time Magazine

There would also have been the risk that bin Laden’s trial might have become a show trial, intended to illustrate the moral superiority of America rather than guarantee an even-handed, fair judicial prosecution. It is entirely possible, given the precedence of past high-profile cases, that bin Laden himself would have used a trial as a pulpit to spread propaganda.

In this context, it’s not obvious that bin Laden would have received a fair defense. Would the US be have been willing to hand over evidence against him as well as the names of witnesses who would have testified against him? If the trial were to be fair, they would have had to.

One problem that bin Laden may not have had is with finding legal representation. While some have suggested that bin Laden would have had a difficult time finding representation, this seems very unlikely. There is no shortage of lawyers who would dream to make their career defending individuals like bin Laden. A lawyer like Jacques Verges would seem a logical candidate. Dubbed the “Devil’s Advocate”, Verges has represented the likes of Slobodan Milosevic, Carlos the Jackal and Klaus Barbie.

Where would he have been tried?

“the…big unspoken issue here, as well: whether bin Laden or even one of his lieutenants could have ever received a fair trial, anywhere”

Even if he had not been transferred to Gitmo, there has been little to suggest an appetite for a trial of bin Laden in the US. Last year, Eric Holder Jr., the US Attorney General, declared that bin Laden:

“will never appear in an American courtroom…Let’s deal with the reality here. The reality is, we will be reading Miranda rights to a corpse.” 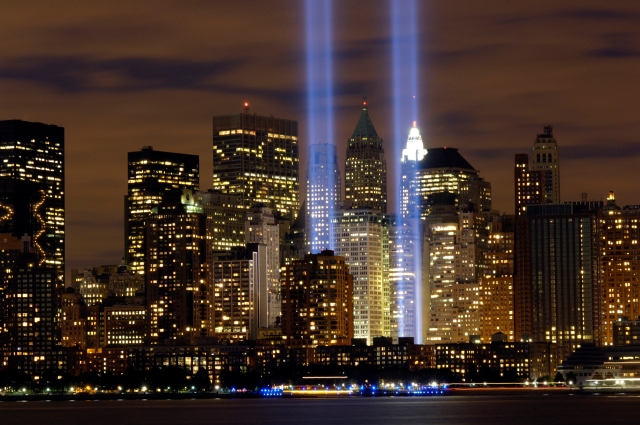 If a trial of bin Laden had been initiated, it is likely that it would have covered 9/11

It remains an important question to consider what “justice” is served with the assassination of bin Laden. A trial of bin Laden would have served justice not in an abstract sense but in its consequences. Similarly, Hoover comments that:

“I might be inclined to pursue justice against bin Laden through the law and via the medium of a public trial (my mind is sincerely not made up on the matter), but my reasons for that are not that I want justice to be done and only justice delivered in this way is acceptable – my support would be based upon the further ends that such a pursuit of justice bring with it, such as affirming the authority of international law, displaying the procedures of legal and formal justice, etc.”

The choice of which crimes are adjudicated is inevitably selective. My guess would be that the 9/11 attacks would be the primary case for the basis of a trial. Even then, however, it would have been unlikely for bin Laden to be tried for the deaths of all of the victims of 9/11. Precedence shows us that the crimes selected for adjudication are often only a sliver of the total catalogue of crimes that individuals like bin Laden have amassed.

In the trial of Saddam Hussein, for example, Hussein was convicted and sentenced to death for crimes against humanity for the deaths of 148 Shias in Dujail in 1982. But the crimes committed under Hussein’s regime over twenty-five years were clearly more extensive than the deaths of these 148 Shias. I don’t think it is particularly controversial to say that by convicting him to death for killing 148 individuals, a more “complete” justice was denied. The same could have happened in bin Laden’s case. 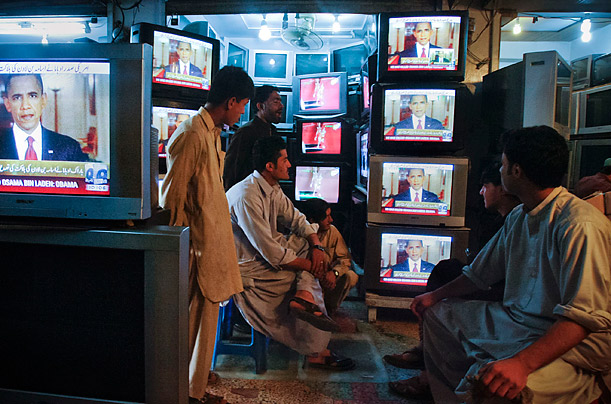 The world has been gripped by the death of bin Laden (Photo: Naseer Ahmed/Reuters)

Who would have paid?

Lastly, apprehending bin Laden, holding him, providing him with security, and subsequently putting him on trial would have been remarkably expensive. It seems naive to think that the American populace would have accepted that tax dollars went to guaranteeing bin Laden’s trial. While the relationship between the US and international criminal law has improved, it still has a ways to go.

It may be, as Triska writes, that:

“killing bin Laden saved the Americans the immense trouble of finding where and how to try him.”

This post isn’t intended to offer an exhaustive list of the challenges that a trial of bin Laden would have faced. Other challenges would certainly have hobbled the possibility of prosecuting bin Laden.

With bin Laden dead, some might simply ask: does any of this matter? On some level, perhaps less than many would hope. It is extremely unlikely that any country or organization will mount a significant campaign against the US for its actions. A UN Security Council Resolution came to the obvious conclusion that:

“Osama bin Laden will never again be able to perpetrate such acts of terrorism.”

On another level, however, the killing of bin Laden, the question of its legality and its justice, as well as thinking through what difficulties exist in holding individuals like bin Laden accountable can catalyze a more sophisticated and promising discourse on the challenges of international justice. This discourse will have important implications on the future appropriateness of actions taken against individuals like bin Laden. Indeed, the debate about justice instigated by bin Laden’s assassination has the potential to be the most fruitful consequence of his death.

For more on the legality, legitimacy and justice of bin Laden’s death, check out this compilation of perspectives.

Mark Kersten is a consultant at the Wayamo Foundation, a Senior Researcher at the Munk School of Global Affairs, and a law student at McGill University Law School. He is also author of the book, 'Justice in Conflict - The Effects of the International Criminal Court's Interventions on Ending Wars and Building Peace' (Oxford University Press, 2016).
View all posts by Mark Kersten →
This entry was posted in Afghanistan, International Criminal Court (ICC), Iraq, Osama bin Laden and international law, Terrorism, United States. Bookmark the permalink.

5 Responses to Bin Laden and International Law: Death or Trial?