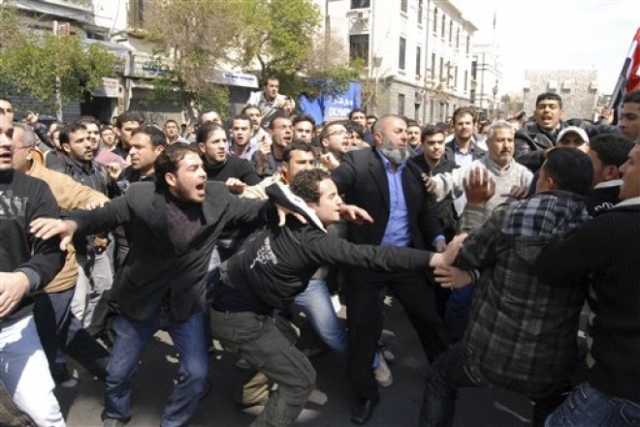 Protests continue to be crushed in Syria, raising the question why the ICC is investigating Libya and not Syria? (Photo: AP)

It appears that Gaddafi, his regime and the human rights community are on the same page about at least one thing: Libya should not be the only state investigated for committing crimes against its own people.

In reaction to yesterday’s announcement by the ICC’s Prosecutor, Luis Moreno-Ocampo, that he is seeking arrest warrants for Gaddafi, his son Saif al-Islam Gaddafi, and the head of Libyan intelligence, Gaddafi regime officials decried the uneven application of justice:

“Why is this not happening to Syria? By any measure what they have been proven to have done is far worse than what Gaddafi is alleged to have done. There is a clear double standard. It is beyond a joke.”

While it is certainly awkward, if not uncomfortable, to imagine that one sides with Gaddafi on anything, the Gaddafi regime is absolutely correct in raising the issue of a double-standard in international criminal justice. Irrespective of whose crimes are worse, it is not clear why Syria, Bahrain and Yemen have not received nearly the international attention that Libya has. Let’s focus on Syria for the moment.

Numerous observers and groups, most notably Amnesty International, have called on the UN Security Council to refer the situation in Syria to the ICC (see this post for an overview).

Yesterday ICC Prosecutor requested an arrest warrant for Gaddafi but it is a troubling reality that international criminal justice is selective and uneven.

In an eery resemblance to the words of the Gaddafi regime, Amnesty International released a statement yesterday demanding that similar attention be paid to Syria by the UN Security Council:

“…the international community that came together in such unprecedented agreement to refer Libya to the International Criminal Court, cannot allow justice to appear selective. By any standard, what is happening in Syria is just as bad as the situation was in Libya when the Security Council referred that country to the ICC.”

It seems almost obvious that both Libya and Syria should be investigated by the ICC. The ICC Prosecutor’s request for arrest warrants yesterday focuses almost exclusively on the initial targeting of those protesting against the Libyan regime. In Syria, remarkably similar crimes have been reported. So why is one brutal crushing of an uprising not the same as another? Why does one catch the attention of the world and the ICC while others do not?

Numerous critics have already picked up on the evident hypocrisy and double-standard. Dominic Waghorn, for example, writes:

“It took just two weeks for the International Criminal Court to begin investigating Gaddafi, his sons and commanders over allegations their security forces had attacked peaceful demonstrators.

More than six weeks into Syria’s unrest, Assad’s security forces are gunning down their own people in their hundreds and the west still has not moved beyond words of condemnation.”

Most of the pressure should be placed at the feet of the UN Security Council which has been painfully reluctant to take any effective action to stop the killing of civilians in Syria. Yet the ICC has also been conspicuously silent (as far as I can tell) in saying nothing about Syria. While Syria is not a member-state and the ICC would require a UN Security Council Resolution to investigate the situation there, the Court previously spoke in favour of a Libya referral and a referral from Ivory Coast prior to either one being referred.

We can all guess as to why member-states of the UN Security Council would be hesitant to refer the situation in Syria. Numerous states, particularly Russia, India and China, are unhappy with how the mission in Libya has developed, are nowhere close to joining the ICC and, most importantly, aren’t eager to set any precedents by making two referrals to the ICC in just a few months. The BBC’s Claire Bolderson suggests that without the support from a regional organization, like the Arab League in the case of Syria, any international intervention, military or judicial, is unlikely to occur.

As for the ICC, some suggest that it has too many cases on its plate. As I have argued previously, this line of reasoning is neither politically nor morally sufficient.

There is a serious danger that Syria will go the way of the Democratic Republic of Congo (DRC), where a civil war resulted in the deaths, directly or indirectly, of almost 3 million people. While the world’s attention has focused on crises like those in Rwanda and Darfur, the people of DRC have long suffered from the international community’s lack of attention and donor fatigue. Will the same be true of Syria? Will we look back and make comparisons between the neglect of Syria and the neglect of the DRC?

At a recent lecture, Louise Arbour, the former Chief Prosecutor of the ICTR and the ICTY and current Executive Director of the International Crisis Group, was asked a question about the uneven application of international criminal justice. The question concerned powerful states, such as the US, remaining outside the cross-hairs of the ICC but Arbour’s answer could just as easily apply to the disparity between Libya and Syria. Arbour recounted how she was asked this question by leaders in the former Yugoslavia and only recently had she found the right answer:

“Because there is disparity does not make you less guilty. It does, however, make the situation less just.”

Gaddafi is not less guilty because of what happens in Syria or anywhere for that matter. But the character of international criminal justice and the hopes that it can ever be universal are severely tarnished when it is applied so selectively.

Mark Kersten is a consultant at the Wayamo Foundation, a Senior Researcher at the Munk School of Global Affairs, and a law student at McGill University Law School. He is also author of the book, 'Justice in Conflict - The Effects of the International Criminal Court's Interventions on Ending Wars and Building Peace' (Oxford University Press, 2016).
View all posts by Mark Kersten →
This entry was posted in International Criminal Court (ICC), Justice, Middle East, Syria, UN Security Council. Bookmark the permalink.