The (in)Justice of Famine: Is al-Shabaab guilty of a Crime Against Humanity?

The following is a post from friend and colleague Andrew Jillions. Andrew is finishing up a PhD in International Relations at LSE. His research looks at the nature of constitutional obligations in international law, focusing how a faith in rules constructs the rule of international law. He also spent a brief stint as an intern at the ICTY. Keep an eye out for more posts at JiC by Andrew!

A famine victim is transported in a wheelbarrow (Photo: http://www.newsmania.com)

Is al-Shabaab guilty of a Crime Against Humanity?

Before getting to this, it’s worth recapping the genesis of this crisis. The trigger was a below average Deyr rainy season (Oct-Dec 2010) followed by the partial failure of the Gu primary season (April-June). On the back of this, crops failed, livestock died, food prices skyrocketed, the economy crumbled even further and, because of the underlying food insecurity caused by decades of conflict, it hasn’t taken long for the crisis to become a famine.

It is dangerous to oversimplify what factors have helped elevate the crisis into what is now classed as Africa’s worst food security crisis for 20 years, with famine declared in most regions of southern Somalia. Donor states themselves bear some blame for not being quicker to recognize the level of aid needed to address the crisis. Humanitarian organisations can be criticized for giving in too easily to US concerns about funding terrorists and failing to find a way to work within what is admittedly a complex political situation. High food prices weren’t simply due to localized forces but to international speculators jacking up global food prices. Climate change hasn’t helped either.

But it’s local politics that have done the most to turn food insecurity into famine. Al-Shabaab, the rebel group in control of much of the famine afflicted areas, has proved the biggest barrier to improving food security and getting humanitarian relief to the affected communities. In short, the charge is that we wouldn’t be seeing either famine or the resulting internal displacement, at least not on the present scale, if it wasn’t for al-Shabaab.

And so we get to the question of guilt and criminal responsibility, and whether al-Shabaab’s leaders are guilty of a crime against humanity. 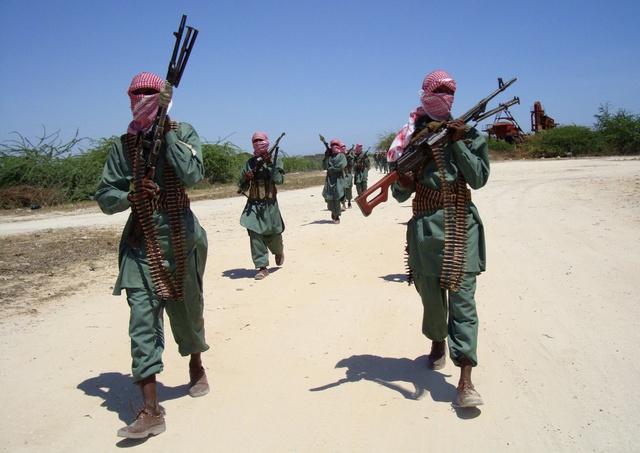 al Shabaab militants training on the outskirts of Mogadishu. Is al Shabaab guilty of a crime against humanity for its role in the famine? (Photo: wehelmedia.com)

Famine as a Crime Against Humanity

In evaluating whether famine can potentially meet the threshold for a crime against humanity, we’re looking at whether it’s part of an action or attack that is widespread or systematic and directed against a civilian population with knowledge and intent. As Alex de Waal points out, in many respects famine is the wrong word to be using here. In the context of criminal responsibility it makes better sense to talk of widespread and systematic starvation. “In famine epidemiology, the verb to starve is transitive – like wounding or murder, it is something that people do to one another.” As Amnesty International have similarly noted, using restrictions on humanitarian aid as a political tool – as Mugabe is accused of doing in Zimbabwe – does provide some grounds for a crime against humanity.

Famine in this sense also contributes to the deportation or forcible transfer of the population (Art. 7.1.d). Famine causes massive internal displacement and forced migration. If there’s any doubt about this, look at how, almost overnight, the refugee camp at Dadaab has been turned into Kenya’s third largest city. What this suggests is that there is a clear-cut case for famine falling under the existing elements of the crime, at least in terms of the action it denotes. There is a prima facie case for al-Shabaab to answer.

The case against Al-Shabaab

The key question, as with all ICL, is whether we can prove intent. Did al-Shabaab engineer the starvation of civilians?  There are two possibilities here, the first that they are culpable for creating the famine, the second that their culpability only begins after the famine had been declared.

As both Sen and de Waal classically argue famines are not natural occurrences. Famine (as opposed to food insecurity) is not caused by the weather; don’t blame it on the rain. Famine is a creation of a political system that in the first instance makes adequate agricultural investment and land management near impossible and, when there is a crisis, limits the possibility of an effective response. Famine is the direct result of governance failure. And it is clear that Somalia has suffered from such a governance failure: as one refugee simply put it, famine stops at the Kenyan border.

Is al-Shabaab responsible for this governance failure? It has, without a doubt, been complicit. It brought some stability to the regions under its control, but day to day life was and is universally harsh. There is a core group of senior leaders, with control divided up into semi-autonomous regional divisions. In some areas a more moderate version of Sharia law rules than in others, tempered by local Somali customs.

But it is also easy to overstate the level of control they have; they are certainly not the only actor who can be blamed for civilian suffering. There is a suggestion that the organisation itself has also been hit hard by the famine, for example being forced to pull out of Mogadishu. But al-Shabaab was hurting well before the current crisis, riven by infighting and competition over the organisation’s direction and ideology, and by US drone strikes. In fact, one area where there is some evidence of a continuing coherence and control is in their response to the humanitarian crisis.

Over 2009 and 2010, al-Shabaab banned six specific humanitarian organisations from entering their territory, including the World Food Programme, citing ideological reasons as well as reacting to the Western donors of these organisations. Some smaller organisations were however able to operate in some areas under al-Shabaab control, reflecting the splits within the organisation. The obvious effect of this was to make those regions where humanitarian organisations were barred less able to respond to the drought and food insecurity. When, in July of this year, drought was declared, there were some reports that the ban had been lifted. But the leadership was quick to deny this, stating that the ban was still in force, delaying the humanitarian response. Despite the claim that we should focus on what al-Shabaab do rather than what they say, it is what they said that mattered in delaying the humanitarian response.  It’s also worth noting that in recent weeks they’ve been enjoying a recruitment bonanza, as desperate youths look to the only source of income on offer, and using the border chaos to expand their operation into Kenya, suggesting that the strategic leadership is still in place.

Having said all this, however, administrative or political incompetence is not grounds for international criminal guilt. Neither is ideological blindness, as far as I know. Al-Shabaab did not wilfully engineer the famine, unless it can be shown that they had knowledge that their incompetent governance would lead to the current crisis.

Photo taken during the 1992 famine in Somalia. In the context of the spread of international criminal justice, should we consider famine a crime against humanity? (www.somali.msf.org)

But what about their actions after the famine was declared? How should we interpret their decision to deny access to humanitarian organisations once civilians were dying in large numbers? More than this, how should we interpret reports that they actively prevented civilians from leaving Somalia for the (relative) safety of the refugee camps?

After the famine was declared, the incompetence defence dries up. Al-Shabaab had clear knowledge that their actions would result in widespread death. Crucially, they also seem to have had intent. The best way to illustrate this is by analogy. If, for example, a person was trapped in a burning house and you actively, intentionally prevented the fire service rescuing the individual or putting the fire out, these would be ample grounds for (domestic) criminal responsibility. The same basic threshold applies to determining intent under international criminal law. David Marcus sees this as intent by recklessness. Because there was a clear offer of help, and because any right-thinking individual could see that blocking this offer of help would lead to more deaths, it seems legitimate to conclude that al-Shabaab is responsible for engineering those deaths connected to the denial of humanitarian access.

Does any of this really matter? Responding to the crisis poses enough challenges as is. Is calling for justice really the correct response to a famine? To put it crudely, you can’t eat justice. On the specific issue of whether famine is a crime against humanity, there are plenty enough examples of more general violations of human rights and humanitarian law to pin on the parties. But it is important, I think, to establish that when the current crisis is eventually brought under control, there are international standards that can plausibly be applied in bringing some of the architects of the famine to account.

Mark Kersten is a consultant at the Wayamo Foundation, a Senior Researcher at the Munk School of Global Affairs, and a law student at McGill University Law School. He is also author of the book, 'Justice in Conflict - The Effects of the International Criminal Court's Interventions on Ending Wars and Building Peace' (Oxford University Press, 2016).
View all posts by Mark Kersten →
This entry was posted in al-Shabaab, Crimes against humanity, Famine, Justice, Somalia. Bookmark the permalink.

3 Responses to The (in)Justice of Famine: Is al-Shabaab guilty of a Crime Against Humanity?