The Middle Man: The Intermediaries of International Criminal Justice

Dear JiC Readers: We continue this week with a new guest-poster at JiC, Holly Dranginis. Holly is a law student at Berkeley Law School and a researcher at the Berkeley Human Rights Center. She was a consultant for the International Criminal Court in 2008 and led capacity building initiatives in Northern Uganda with intermediaries and international nongovernmental organizations in 2009-2010. Most recently she interned on the prosecution team for the Charles Taylor case in The Hague. We hope to have Holly become a contributor and to share her experience and knowledge at JiC on a regular basis. 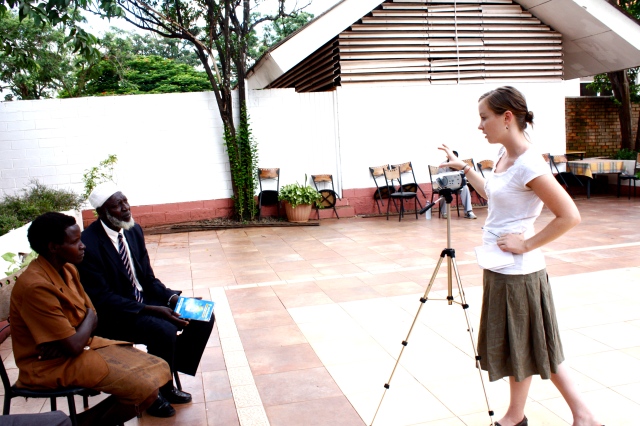 The Middle Man: The Intermediaries of International Criminal Justice

Dr. Paul Farmer recently wrote for Foreign Affairs with a fresh perspective on the great challenge of aid in impoverished, disaster-affected and war-torn countries. To improve the quality and longevity of initiatives, he says, “Foreign contractors and international nongovernmental organizations (NGOs) need to find a better way of accompanying development partners.” This is as true for public international law as it is for public health. For the International Criminal Court (ICC), one barometer of good accompaniment and therefore in some ways, success in the overall mission, are intermediaries.

There is quite a rich debate in whether it is appropriate to place justice in conflict among the health and development initiatives that are Farmer’s area of expertise. But for a moment, let’s imagine that delivering rule of law, whether on an international, hybrid, domestic or community level is a form of aid alongside medicine and poverty-eradication that share glaring achievement gaps. Failure to do so may be precisely part of the problem we face in effective implementation.

The term “intermediary” in ICC parlance is quite elusive, appearing nowhere in either the Rome Statute or the ICC’s Rules of Procedure and Evidence. A definition offered in a recent report by the Victims’ Rights Working Group (VRWG) says, “[An intermediary is] someone who comes between one person and another; facilitates contact…between one of the organs or units of the Court or Counsel on the one hand, and victims, witnesses…or affected communities…on the other.” With some exceptions including United Nations personnel, intermediaries are typically local nongovernmental organizations who do the investigating, liaising and translating that ICC personnel may be unable to do for lack of time, money and importantly, cultural familiarity. Intermediaries find key witnesses and crime sites, help interview and gather witness statements and navigate state political postures toward the Court. They also help witnesses and victims fill out forms on everything from reparations to protective measures and perform community outreach where ICC field offices are ill-equipped to cover their often vast geographic mandates.

The VRWG definition dovetails with Farmer’s explanation of accompagnateur, that is, someone who is “present on a journey” with the beneficiary and who says, “I’ll go with you and support you on your journey wherever it leads; I’ll share your fate for a while.” An intermediary staffer I met in Lira, Uganda last year who I’ll call Grace, explained her role in a similar way: “We as intermediaries know much about the victims. [The Court] must come down to the grassroots–not just come to get information from the RDC (local government minister), the district and so-forth. Those people don’t have the actual knowledge that we have.”

Grace’s comment evokes Farmer’s reference to Roberto Goizueta’s warning against removed administration: “The tendency to ‘minister from safe enclosures’ rather than from the place itself,” causes significant problems in implementing successful initiatives and, as in ICC situation countries, gaining the trust and respect of your most important partners. The fact is, ICC personnel flying down from The Hague for a few days at a time rarely have the sensitivity, historical background, or cultural intuition to liaise with witnesses and victims effectively without the help of intermediaries.

Lawyers, like doctors, travel in the field to glean data, contextual understanding and the needs of their beneficiaries. Before writing indictments, they speak to the people about identifying those most responsible; before creating evidence charts they search for the best informants in rural villages; and before advocating for certain sentences, they find out how crimes impacted both individual witnesses and communities.

Intermediaries provide scalpels for these tasks where the Court may otherwise approach the situation with a hatchet. Intermediaries know the political and environmental elements essential for more effective implementation of witness protection. They know the code words for rape that informants use in communities where the original terms are taboo. They keep good track of who has given statements to whom, how consistent the stories are and the possible explanations for inconsistencies. They know who has gone for psychosocial treatment and who has not. They know which informants are sick with malaria and which informants are taking care of children sick with malaria. They know where, how and why NGO money flows within situation countries. They know where to find the bones of individual victims when court investigators may only have taken note of mass graves. We need these people. And importantly, they need support.

In spite of performing a unique and critical duty, intermediaries are not without their flaws and there is healthy skepticism surrounding their continued role in cases before the ICC. In the aftermath of controversy in the Lubanga trial last summer surrounding the risk of intermediaries bribing and coaching witnesses, IntLawGrrls provided an excellent comment on the pros and cons of the involvement of intermediaries. Just as with witnesses, investigators, attorneys and anyone else critical to the process, intermediaries must be thoroughly vetted and monitored. There are high risks involved along the communication chain from village to courtroom. Intermediaries are capable of abusing their roles and tainting the legal process if they lie, use bribery, disclose confidential information, or falsify or exaggerate paperwork.

Accordingly, inquiries into how best to ensure quality control for court procedures and whether intermediaries increase or decrease the odds of achieving that should continue. However, regardless of sound arguments against using intermediaries, as long as the Court does use them, it ought to provide them with support. At the moment the Court relies on their work, that work transforms from voluntary advocacy to essential legal services and ought to be compensated in some significant way. This has been severely lacking. Head of an intermediary organization in Lira, Uganda, Chris Ongom, explains, “As the Statute clearly puts it, the ICC is victim-centered. But what I’ve realized is, it’s the most deprived section of the Court in terms of financial presentation. Purely the Victims Participation and Reparation Section (VPRS) cannot do it with two staff in the entire country. So they have been relying on intermediaries.”

The intermediaries are the accompagnateurs in Farmer’s words, and as he says, “accompagnateurs need accompaniment.” As many advocate, there should be better training and clearer policy. But in addition, there should be financial consideration. If the Court is unable or unwilling to make out-and-out payments, they should deliver frequent training on fundraising strategies and efficient use of budgets—a creative alternative I had the pleasure of seeing piloted by VPRS in Uganda last year.

A couple weeks ago, the ICC held a workshop for intermediaries in Chad. A report on the occasion noted, “One of the aims of the seminar was to build capacity…of methodology of working with victims and to raise awareness of good practice in interacting with them.” This is critical. But what I have seen is that this mandate misses some of the intermediaries’ most urgent needs and focuses instead on building capacity for something intermediaries already have. For the Court, the very virtue of intermediaries is tied to their local citizenship (and here I mean citizenship in every sense of the word) and that typically means they know quite well how to interact with the victims.

This is certainly not to say that training sessions in this area aren’t needed. They are. But where intermediaries need the most help is with their ability simply to survive. They need money to pay their employees (many rural Ugandan intermediary staff work for no pay in a country whose inflation is the highest in the region and where over half of the population live below the international poverty line of $1.25 per day (UNICEF)). They need basic medical and food supplies for home visits to ill or malnourished victims and witnesses. They need motorbikes to translate a full day of walking to visit to a single witness in their home into assistance to 8 or 10 in the same amount of time.

These services improve the international criminal law craft. A witness who can’t fill out a form or whose children die of malnourishment will likely make for inferior evidence. Sitting in the grass on her high school campus where she was abducted by rebels in the years during the war, a young Ugandan woman told me, “There is need to look into the safety of the victims before even starting the trial process. We live in an open community. We drink from the same tap. And so, the security of the person, if not highly protected, will create problems.”

Although advocacy groups in situation countries like Uganda are enormously dedicated, their work for the ICC is not guaranteed. In addition to their legal work, most intermediaries attend to needs outside the scope of international justice, from hunger to disease. If they don’t receive recognition and the support they need to face resource scarcity and threats, intermediaries’ voluntary work for the ICC could disappear.

Still in its infancy and thus embroiled in foundational policy and practice questions, the ICC has not formally decided whether it will continue to use intermediaries and exactly how. But without establishing a disciplined and creative approach to supporting them in the meantime, it will likely lose its chance to decide at all.

Mark Kersten is a consultant at the Wayamo Foundation, a Senior Researcher at the Munk School of Global Affairs, and a law student at McGill University Law School. He is also author of the book, 'Justice in Conflict - The Effects of the International Criminal Court's Interventions on Ending Wars and Building Peace' (Oxford University Press, 2016).
View all posts by Mark Kersten →
This entry was posted in Human Rights, International Criminal Court (ICC), Justice, Uganda. Bookmark the permalink.