I have always been of the opinion that we need to closely scrutinize the effects that are being attributed to international trials. There is a tendency to conflate the objectives and capabilities of international courts and tribunals by putting forward ever new and more grandiose claims as to what they can actually achieve in building up post-conflict or post-dictatorship societies. One of the classical claims brought forward is that trials can contribute to the reconciliation of torn societies by determining who is and who is not guilty of committing atrocities and by presenting a truthful historical record on which a common future can be built.

According to Audrey Chapman reconciliation in this context means both the transformation of the relationship between people living in the conflict region as well as the creation of a new relationship built on trust between the people and the government (p. 143). As reconciliation processes are more likely to gain momentum in the long run, the case of the International Criminal Tribunal for the former Yugoslavia (ICTY) is probably the most suitable for having a closer look at these claims. Indeed, the ICTY does claim that it furthers reconciliation within its jurisdiction by personalising the guilt for atrocities and thus shielding communities from being labelled as collectively responsible in the general information material available at the premises of the court.

The ICTY has been investigating crimes and trying cases in the former Yugoslavia for close to two decades now. Important international players like the US have discouraged the court from ever becoming an effective institution in its early phases by trying to withhold necessary resources and the tribunal has seen its fair share of attempts of external political meddling in later years. Still, the ICTY has been able to produce some impressive results, including the arrest of those deemed most responsible for the worst crimes committed during the Balkan wars. The tribunal has shown that those indicted will eventually end up in the dock, even if it takes decades for justice to take its course.  Former Serbian President Milosevic was arrested in April 2001, and Radovan Karadzic, accused of being involved in the Srebrenica Massacre, was arrested in July 2008, after having lived in hiding as a doctor for alternative medicine in Belgrade for years. Finally, the court was able to secure the arrest of Ratko Mladic, the last fugitive among the high profile indictees of the tribunal, in May 2011. 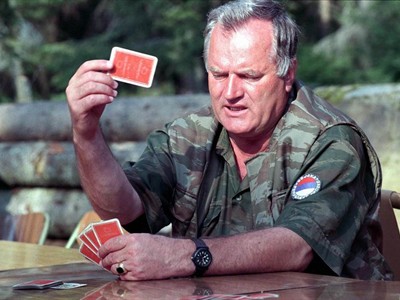 Ratko Mladic in his uniform during war times

Despite these undeniable successes, the tribunal’s track record in terms of reconciliation is mixed at best. Field research suggests that the contribution of trials conducted at the tribunal to reconciliation has been minimal. Mladic’s arrest and extradition to the court again sparked protests by Serbian nationalists, which suggests that reconciliation has not progressed as far as one might hope after nearly two decades. Findings show that the ethnic groups involved in the conflict support trials at the ICTY as long as their ‘own’ commanders and leaders are not involved. Large parts of all ethnic groups involved still deny the war crimes committed by their war-time leaders and hold them in high-esteem or even see them as war heroes. It does thus not come as a surprise that many Croats and Serbs perceive the ICTY as being biased against their ethnic group. Janine Clark has also found that allegations of guilt against the other ethnic groups remain strong in Bosnia and Herzegovina despite the tribunal’s work.

Yet, there are some signs for reconciliation efforts on the national level of the states that were founded as successors of the Yugoslav Republic, particularly in Serbia. After years of barely touching on the topic, the Serbian Parliament finally condemned the Srebrenica Massacre for the first time in March 2010. In the following November, Serbian President Tadic publicly apologised at a commemoration ceremony in the Croatian locality of Vukovar for a massacre of Croatians committed by the Serb-led Yugoslavian army in 1991. Last but not least, the arrests and extraditions of Karadzic and Mladic in Serbia underline the readiness of the state to deal with its violent past. These reconciliation efforts on the national level are, however, more likely a result of the EU’s pressure on Serbia to tackle past crimes if the state wants to become a member of the European Union.

President Boris Tadic during the commemoration ceremony in Vukovar

Indeed, the EU has been a key player for securing the success of the ICTY’s work in the former Yugoslavia by declaring cooperation with the ICTY a precondition for the accession of states in the region interested in joining the EU. All in all, the achievements of the ICTY in matters of reconciliation are limited. Considering that the conflict in the region ended 15 years ago these findings are a reason for scepticism towards reconciliation claims brought forward in the context of international trials. Some critics, like Susanne Buckley-Zistel, have indicated that there might be a major contradiction between reconciliation as a grass roots concept and the top-down approach of international criminal trials. Be that as it may, the current track-record of the ICTY cautions about tendencies to overburden international courts and tribunals with too many expectations.