Prosecuting crimes against cultural property in Northern Mali: Why it Matters

Jelia Sane joins us for this must-read post on the ICC’s investigation of cultural crimes in Mali. Jelia holds an LLM in Public International Law from University College London and has previously interned at the Appeals Chamber of the ICC, the Centre for Justice and International Law in Argentina, and the  Office of the Co-Prosecutor at the Extraordinary Chambers in the Courts of Cambodia. 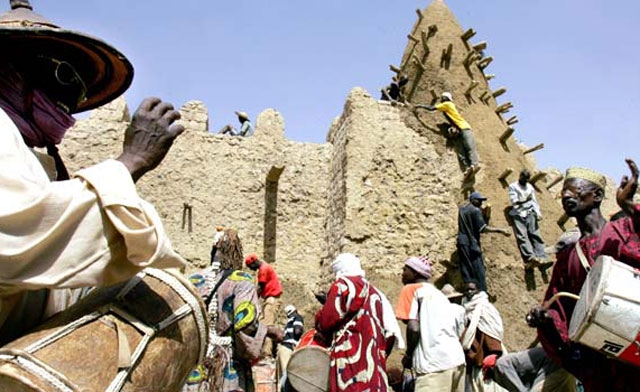 On 1st  July 2012, Fatou Bensouda, the ICC’s newly appointed Prosecutor,  declared that the destruction of Sufi shrines in Timbuktu constituted a war crime under the Rome Statute. Three weeks later, following Mali’s self-referral to the Court, the Office of The Prosecutor (OTP) officially launched a preliminary examination into the violence that has engulfed the country since January 2012.

The focus of this post is not whether the OTP can legally intervene in Mali under the terms of Article 53(1) Rome Statute, nor does it seek to question the wisdom of the ICC taking on yet another African case. Rather,  it will consider why the ICC should concern itself with cultural property crimes in the midst of a civil war that has had a devastating impact on the local population.

It only took three days for members of the islamist  Ansar Dine (“Defenders of the Faith”) rebel group to methodically destroy half of Timbuktu’s legendary Sufi mausoleums and shrines, along with the city’s great Sidi Yahyia mosque. Much like the Taliban’s widely condemned destruction of the Bamiyan Buddhas  in 2001, this attack is in no way justified by the exigencies of war. Rather, it seems to be rooted in the desire to eradicate religious symbols that Ansar Dine has deemed contrary to its strict Salafist interpretation of Islam.

The repercussions of this assault have been felt far beyond the local community and Mali itself,  for Timbuktu is no ordinary place. Founded in the 5th century AD, the “City of 333 Saints” gained prominence in the 15th and 16th centuries as one of Africa’s great spiritual, intellectual and commercial capitals. Its three grand mosques – Sidi Yahyia, Djingareyber, and Sankore- were instrumental in spreading Islam throughout the continent and, with the prestigious koranic Sankore University, bear witness to its  glorious past. During its golden age, Timbuktu also served as a major trading centre for the salt and gold trade,  attracting merchants from across the region and the Arab world. In recognition of its historical significance and “outstanding universal value” it was designated as a World Heritage Site by UNESCO in 1988.

And so, the international community – having days before placed Timbuktu on UNESCO’s  list of Endangered World Heritage Sites – watched in horror as one of  humanity’s treasures was ransacked. Irina Bokova, the organisation’s  Director-General, described the acts as an “attack against humanity”. Governments across the globe, including the US, the UK, France and Russia, swiftly condemned the  attack and, to no avail, urged Ansar Dine to stop the destruction.

Whilst the events in Timbuktu were undeniably shocking, the fabled city is by no means the only victim of Mali’s brutal civil war. Over the last eight months, killings, abductions and rapes have become commonplace in the north of the country. Non-combatants have been summarily executed and child soldiers forcibly recruited. An  unmarried couple was recently stoned to death by Islamist militants. According to the UN’s Office for the Coordination of Humanitarian Affairs, over 400 000 civilians have been displaced by the violence.

Is it appropriate to weep for buildings in the face of such human suffering? Does this not displace concern from the civilian population? Would the ICC’s limited resources not be better spent on investigating, prosecuting and trying those responsible for the above crimes ? 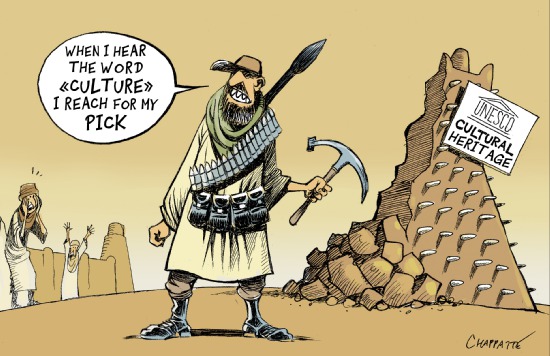 By and large, the adjudication of international crimes – genocide, war crimes and crimes against humanity – has focused on a narrow set of underlying egregious violations of core civil and political rights, mostly related to physical integrity or personal freedom. That there is a need to deliver justice in the wake of mass murder, torture or sexual violence is clear, given the particularly heinous nature of these acts.

Nonetheless, there are at least three compelling reasons to address crimes against cultural property. The first relates to the special value that societies place in cultural property, defined under the 1954 Hague Convention for the Protection of Cultural Property in the Event of Armed Conflict as moveable or immoveable goods, such as religious monuments or works of art, of significant importance to people’s “cultural heritage”. Cultural objects are intrinsic to a community’s identity and serve to provide future generations with a lasting record of the human experience. In some cases, such as Timbuktu, they embody  the highest accomplishments of creativity, endurance  and spirit.  As highlighted by one commentator:

“The need for cultural identity, for a sense of significance, for reassurance about one’s place in the scheme of things, for a ‘legible’ past, for answers to the great existential questions about our nature and our fate-for all these things, cultural objects provide partial answers.”

Wanton crimes against cultural property constitute an attack against the very identity of a society and can be the first manifestation of a desire to target the group whose property is under assault. As such, protecting culture should not merely be seen as a luxury that the international community should concern itself with in times of peace, it is often a pressing human security issue in times of war. The widespread destruction of Muslim religious property during the Balkan wars is case in point, and, as confirmed by the ICTY, such targeting  may amount to persecution as a crime against humanity:

“when perpetrated with the requisite discriminatory intent, [the destruction] amounts to an attack on the very religious identity of the people. As such it manifests a nearly pure expression of the notion of ‘crimes against humanity’ for all of humanity is indeed injured by the destruction of a unique religious culture and its concomitant cultural objects”

Second, it should be emphasised that the protection of cultural property has long been intertwined with the laws of war and customary norms protecting immoveable objects were first codified under the 1907 Hague Regulations. Intentionally and wantonly attacking cultural property is a war crime under the  1954 Hague Convention and the 1977 Additional Protocols. As with all war crimes prosecutions, holding offenders to account stigmatises their behaviour, vindicates victims and their rights, and serves to enforce humanitarian law and combat impunity for international crimes. And there is a pressing need for accountability in this context, for cultural property has long been a silent casualty of armed conflict. One only has to think of the Nazi’s widespread looting of art during the Holocaust, the Khmer Rouge’s desecration and destruction of most of Cambodia’s Buddhist temples or Iraq’s plunder of the Kuwaiti National Museum to appreciate culture’s vulnerability in war.

Finally, aside from furthering the aims of international justice, crimes against cultural property ought to be addressed insofar as they  constitute a serious violation of an individual’s right to participate in the cultural life of his or her community, enshrined under Article 27 UDHR and Article 15 ICESCR. As has been argued here, the scope of transitional justice should be expanded to include accountability for gross violations of socioeconomic and cultural rights. Having long been construed as aspirational, these rights tend to be poorly articulated in judicial  mechanisms. Yet it is axiomatic that a mass denial of ESC rights can have a devastating impact on local populations. It can trigger and fuel armed violence, and maintain systems of abuse in place. Moreover, failing to prosecute these types of  violations creates an impunity gap and provides victims with only a partial redress for the injustices they have suffered. Consequently, as Louise Arbour posits,

Transitional justice should take up the challenge that mainstream justice is also reluctant to rise to acknowledging that there is no hierarchy of rights and providing protection for all human rights, including economic, social and cultural rights. A comprehensive transitional justice strategy would therefore want to address the gross violations of all human rights during that conflict.

It appears that the drafters of the Rome Statute were willing to rise to this challenge, having included amongst the ICC’s catalogue of war crimes

intentionally directing attacks against buildings dedicated to religion, education, art, science or charitable purposes, historic monuments, hospitals and places where the sick and wounded are collected, provided they are not military objectives

The events in Timbuktu prima facie fall under the scope of this provision, which applies during internal and international armed conflicts. The mausoleums and mosques targeted by Ansar Dine were both clearly “dedicated to religion” and “historic monuments”. It is hard to see how the military objective exception could apply, since the attack appears to have been motivated by religious ideology rather than military necessity.

Whilst the inclusion of crimes against cultural property under the Rome Statute  is to be welcomed – it signals that such offences are to be taken as seriously as crimes against persons – the provision  has been described as “anachronistic, incomplete and inconsistent”.It is beyond the scope of this post to enter into a detailed analysis of the rule, but suffice it to say that it suffers from a lack of specificity – it protects cultural property together with other civilian objects  and fails to introduce a differentiation in gravity between attacks against different segments of cultural property – and imposes no criminal liability on individuals who use cultural property in support of military action.

That the drafters of the Rome Statute failed to adopt a more robust and comprehensive framework to address cultural property crimes is surprising in view of the significant normative developments in this field since the Second World War (see for example the more progressive approach adopted under the  1954 Hague Convention and its 1999 Second Additional Procotol, and the ICTY Statute,  amongst others) and the extensive damage caused to cultural property in recent conflicts, such as the Balkan wars. This state of affairs is all the more regrettable since, as the latest violence in the medieval Syrian city of Aleppo illustrates, the wartime threat to cultural property is as real and present as ever.

Mark Kersten is a consultant at the Wayamo Foundation, a Senior Researcher at the Munk School of Global Affairs, and a law student at McGill University Law School. He is also author of the book, 'Justice in Conflict - The Effects of the International Criminal Court's Interventions on Ending Wars and Building Peace' (Oxford University Press, 2016).
View all posts by Mark Kersten →
This entry was posted in International Criminal Court (ICC), International Law, Mali and tagged Ansar Dine, Cultural Crimes, Timbuktu. Bookmark the permalink.

9 Responses to Prosecuting crimes against cultural property in Northern Mali: Why it Matters