If the ICC Intervenes in Syria, Where Will Assad Go?

If the International Criminal Court (ICC) ever opens an investigation into Syria, it will almost assuredly become an irresistible trope to claim that the Court’s involvement caused President Bashar al-Assad to “dig his heals in” and “fight to the death”. It is an intuitive and persuasive claim to make. But there seems to be little support it.

It has long been argued, in the so-called “peace versus justice” debate that ICC investigations and prosecutions, when targeted against government or rebel leaders, remove the incentive of such leaders to negotiate a peaceful settlement and complicate their plans to go into exile or seek asylum. We witnessed this line of reasoning, most recently, in the case of Libya. Muammar Gaddafi was given numerous offers of exile as an incentive to end the conflict through a political, rather than military, solution. Initially, some offers were from ICC states parties, such as Uganda. As the conflict progressed, however, the intervening states exploring exile for Gaddafi made it clear they were looking for non-ICC member states could accept him. Of course, such offers ignored a rather simple but critical fact: Gaddafi had no intention to leave Libya. He said he would stay and fight until his death and he held his word. Little to no evidence suggests that he intended to do otherwise.

More broadly, there is little reason to believe that a leader like Gaddafi or Assad could trust an offer of exile. Offers of asylum or exile for leaders with blood on their hands are increasingly temporary gestures. For proof, look no farther than the case of Charles Taylor as evidence of this fact.

As many readers will already know, Taylor, a Liberian, was a key perpetrator in the notoriously brutal conflict in Sierra Leone. Taylor, however, was also the President of Liberia. During peace negotiations in Ghana to end the civil war in Liberia, the Special Court for Sierra Leone (SCSL) issued an indictment for Taylor. He immediately returned to Liberia, agreed to resign his presidency and fled to Nigeria, which granted him asylum and immunity from prosecution and extradition. After about two years, following requests by the new President of Liberia, Ellen Johnson Sirleaf, and under pressure from the United States and others, Nigeria finally agreed to send Taylor back to Liberia. In response, Taylor tried to flee to Cameroon but was arrested at the border, sent to Liberia and was eventually flown to The Hague to be tried and convicted by the SCSL. Gaddafi, as an important supporter of Taylor, knew this story well.

So what will happen to Assad if the ICC intervenes? 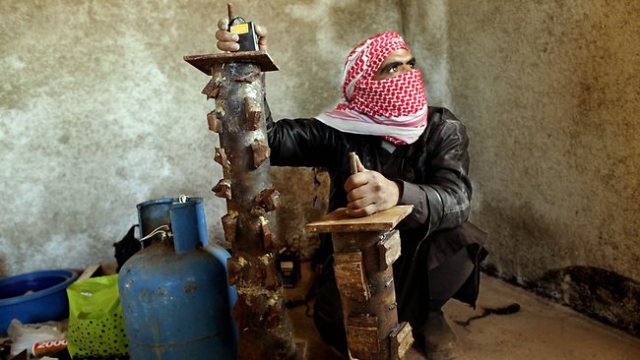 Here’s a snippet from a recent and insightful piece on the subject by Carol Williams and her interview with Andrew Tabler and his take on whether Assad could seek exile:

Tabler, [a] Syria expert at the Washington Institute for Near East Policy, dismisses the notion that Assad would be safe in foreign exile from assassination by angry countrymen, with the possible exception of Iran. He holds out the prospect that Assad could live up to his promise never to abandon his Syrian homeland, especially if the civil war is ended by breaking the country into sectarian components. Assad is of the minority Alawite population, a Shiite Muslim-aligned sect concentrated in the mountainous coastal region of Latakia.

Assad’s fall would be a blow to Russia, no matter how Syria’s chief ally scrambles in the civil war’s 11th hour to put itself on the right side of history, Tabler said. Opposition forces will dominate any post-Assad leadership, and many will hold a grudge against the country that propped up their nemesis through the long bloodletting.

“The Russians don’t want him. Anyone who takes him in is going to be the target of a lot of anger,” Tabler said.

Moscow wants to avoid becoming the object of bitter resentment, Tabler said, as the United States did by sheltering the shah of Iran after the Islamic Revolution, setting in motion an adversarial relationship that persists more than three decades later.

It seems clear that Assad’s fate will be determined in Syria. He is unlikely to give up, even if it does appear that he is losing ground to Syrian rebels. It also seems unlikely he would go into exile. He wouldn’t be safe from groups seeking revenge and he would find it difficult to trust exile as anything more than a temporary gesture.

Other than Russia, some states might consider giving Assad refuge and protection from vengeance or prosecution. There are enough governments that view sticking a finger in the eye of the ‘West’ as a matter of good policy. But how long would that last – until the next government sees protecting Assad as too costly or until a shifting of international allegiances?

Importantly, offers of exile and asylum remain legally feasible. As much as human rights groups might wish it otherwise, there is no international law that prohibits ICC indictees from going into exile or non-member states from accepting indicted individuals. Nevertheless, the nature of international politics has changed dramatically since the days when the likes of Uganda’s Idi Amin could live out the rest of their days in relative peace in exile. Brutal leaders seem more likely today to stick it out to the end than they did just a few short decades ago.

Offers of exile, asylum and immunity continue to be granted to vicious dictators and despots. But they just don’t seem interested in accepting them. Critically, however, it isn’t clear that this is the case because of the existence of the ICC or any changes in the international community’s respect for international justice. So if and when the ICC comes knocking on Damascus, Assad will almost surely remain in Syria. Despite what observers might say, however, it won’t be because of the Court.

Mark Kersten is a consultant at the Wayamo Foundation, a Senior Researcher at the Munk School of Global Affairs, and a law student at McGill University Law School. He is also author of the book, 'Justice in Conflict - The Effects of the International Criminal Court's Interventions on Ending Wars and Building Peace' (Oxford University Press, 2016).
View all posts by Mark Kersten →
This entry was posted in Exile, International Criminal Court (ICC), Syria and tagged Bashar al-Assad. Bookmark the permalink.

1 Response to If the ICC Intervenes in Syria, Where Will Assad Go?