Indonesia and the False Promise of International Justice

Indonesia continues to have a contentious relationship with international justice. Now, “politics” is being blamed for Indonesia’s waning support for the ICC and ratification of the Rome Statute. According to this article out of the Jakarta Post, the ICC is perceived as a potential obstacle to the presidential bids of General Wiranto and General Subianto. The author further explains:

“The two generals have been accused of ordering human rights abuses during the transition period in the late 1990s. An investigation by the National Commission on Human Rights (Komnas HAM) in 2003 deemed Prabowo and Wiranto responsible for the 1998 May riots owing to their capacities as former commander of the Special Forces Command (Kopassus) and chief of the Indonesian Military (TNI) respectively.”

As supporters and critics of the ICC are quick to point out, the Court would only be able to take on cases of atrocities by Indonesians or on Indonesian territory after the date of Indonesia’s ratification. So the fates of Wiranto and Subianto in Indonesia wouldn’t be those of Kenyatta and Ruto in Kenya. Yet, according to the author,

“several politicians warned the government against ratifying the Statute, over concerns that it could be used to thwart the presidential ambitions of Prabowo and Wiranto. ‘Are we willing to be humiliated by the international community by allowing our generals to be prosecuted?’ Rear Admiral Susanto of the National Resilience Institute (Lemhanas) said recently.”

The contentious issue of subjecting Indonesian military officials to international justice is not new. Widely considered responsible for atrocities in East Timor in 1999, Indonesian military elites have long leveraged concerns over regional and domestic stability and a global lack of political will to ensure their impunity. 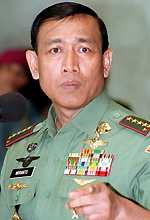 The case of General Wiranto speaks directly to the challenges of holding powerful figures accountable, whether in international or local courts. He is a former Commander of the Indonesian Armed Forces (TNI) who also (unsuccessfully) ran for the Presidency in 2004 and is credited with reforming civil-military relations. In his position as Commander, he has been blamed for the failure to provide security during East Timor’s 1999 “popular consultation” on independence. The vote itself was peaceful, but pre- and post-vote violence was characterized by mass murder, torture, assault, forced disappearances, mass forcible deportations, looting, destruction of property, a scorched earth campaign, rape and other forms of sexual violence. Over 1,000 East Timorese were killed and approximately 600,000 (at least three-quarters of the population) were uprooted from their homes. The violence was perpetrated by local pro-government militias and paramilitaries who were armed, funded, trained, and directed by the Indonesian armed forces and there is a great deal of evidence to support the claim that Indonesian troops directly committed many of the atrocities.

Investigatory reports by both a UN Commission of Inquiry and Indonesia’s own human rights body (Komnas Ham) identified Wiranto as the individual with command responsibility for the crimes committed in East Timor in 1999. He was not indicted by Indonesia’s Ad Hoc Court for crimes in East Timor, which was largely a sham tribunal.  East Timor’s hybrid tribunal issued an indictment (2003) and arrest warrant (2004) for him, but both the UN and Timorese political elites later disassociated themselves from the case.  Indeed, there was little political will to prosecute Indonesian military elites, and the UN-mandated hybrid court in Timor had no ability to extricate the accused from their protected status in Indonesian territory. Both tribunals were criticized for prosecuting mostly mid-level offenders and doling out weak sentences.

Significance of ICC and Indonesia

Turning back to the ICC, it’s important to note that Indonesia participated in Rome Treaty negotiations where it declared support for the ICC and intention to eventually ratify. In 2004, Indonesia adopted a National Plan of Action on Human Rights that stipulated its intent to ratify the Rome Statute in 2008. Ratification has the support of some parliamentarians and civil society, with the latter working to clarify the technical and political implications of ICC support.

Indonesia’s ratification would set an important precedent for the region, as Asia is underrepresented among ICC States Parties. (Only 9/24 have ratified, according to the Coalition for the International Criminal Court).  It’s unlikely that the international community will ever push to close the impunity gap for Indonesian crimes in East Timor, but Indonesia’s ratification of the Rome Statute would be step in the right direction and, perhaps, contribute to broadening the scope of the ICC’s reach in Asia.

3 Responses to Indonesia and the False Promise of International Justice