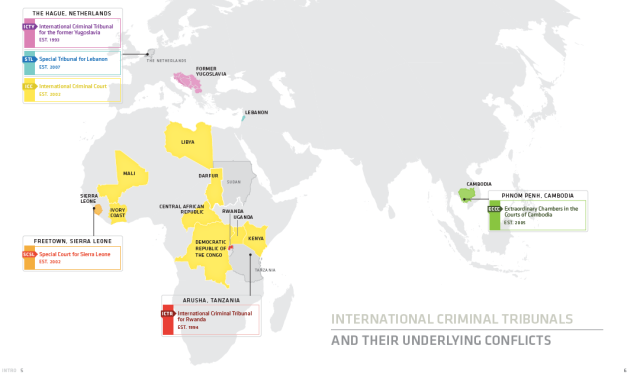 Kevin Jon Heller at Opinion Juris beat me to the punch, but this is most definitely worth sharing with JiC readers. Daniel McLaughlin, who has been a legal officer at the Extraordinary Chambers in the Courts of Cambodia (ECCC) and is currently at Fordham’s Leitner Center for International Law & Justice, has published a brilliant, beautiful (yes, beautiful) and unique report visualizing international criminal justice.

Every single day, we are bombarded with data. The increasing complexity of our world and of the challenges we face have made numbers somewhat silly. We throw them at problems: this many billion dollars for that project; this many million people forced to flee; this many thousand victims in that conflict. The relatively new and exciting field of data visualization has emerged in response to this proliferation of complexity, seeking to make sense of our data-rich world. But it’s not about graphs, charts or tables. It’s about merging design and function and appealing to our ability to visualize complex sets of data. According to one of its proponents,

The main goal of data visualization is its ability to visualize data, communicating information clearly and effectivelty. It doesn’t mean that data visualization needs to look boring to be functional or extremely sophisticated to look beautiful. To convey ideas effectively, both aesthetic form and functionality need to go hand in hand, providing insights into a rather sparse and complex data set by communicating its key-aspects in a more intuitive way.

Of course, data visualization isn’t entirely new to international criminal justice. Anyone who has seen former ICC Prosecutor Luis Moreno-Ocampo present can attest that he regularly used visualization software to map out alleged crimes in places like Darfur. Still, as I recently argued, very little has been done to communicate the work of the ICC in an effective and accessible manner. And despite being a dynamic and data-rich realm, international criminal justice has largely escaped the world of data visualization. That is, until now.

There is wide awareness, though little true understanding, of the work of the international criminal tribunals.

International prosecutions of high-ranking civilian and military leaders, including former heads of state, on charges of crimes against humanity, war crimes and genocide, represent for many the ultimate condemnation of these individuals’ past actions and a measure of their fall from power. Yet, despite the tribunals’ grasp on the popular imagination, they are the subject of significant misconceptions and confusion. Much of the media coverage dedicated to their work remains superficial, at best, and largely muddles over key distinctions between various tribunals, past and present. Conversely, the more informed scholarship is largely confined to specialty publications that remain inaccessible to most. In truth, many lawyers and non-lawyers alike lack a clear understanding of the role and functioning of these increasingly-pivotal international institutions.

This publication seeks to redress this knowledge gap by providing well-researched and accessible information for those wishing to more fully understand the international criminal tribunals and the conflicts over which they have jurisdiction. An informed public is an engaged public – and the issues that animate these tribunals, including delivering justice for victims of some of the world’s worst atrocities, are too significant to be discussed solely by a small cadre of international criminal law specialists.

Notably, this publication was created in partnership with graphic and information designers so as to reach a broader public. The designers’ visualizations present information regarding the tribunals and their underlying conflicts in a direct and accessible manner to a wide range of viewers, including those without a legal background. Beyond this democratizing function, information visualization also serves to reveal important data and trends that might otherwise go unnoticed in a more conventional format. Ideally, the following information, which is current as of January 2013, would be integrated into a continually updated interactive webportal dedicated to engaging a global public on issues of international justice.

In sum, this publication aims to facilitate a broader discussion of the international criminal tribunals’ notable accomplishments, as well as ongoing shortcomings.

And it certainly does.

Perhaps the best known example of data visualization is David McCandless’ ‘Billion Dollar-O-Gram‘ which illustrates the relative cost of everything from the war in Iraq and Afghanistan and response to the global financial crisis to the amounts spent every year on erectile dysfunction and video games. McLaughlin takes a page out of McCandless’ book in mapping out the cost of international criminal tribunals against a host of other expenditures.

As readers will know, international criminal law has been consistently criticized for being too expensive. However, as I have previously argued (see here and here), the cost of institutions like the ICC is peanuts compared to the money spent on things like Hallmark cards and the budgets of baseball teams. McLaughlin helps us visualize this reality by comparing the cost of international criminal justice to transactions like the sale of the Los Angeles Dodges and the total cost of Wall Street bonuses. I know what I’d rather see money spent on.

I encourage all readers to download the whole report, to share it with students and send it to colleagues. Thanks to McLaughlin, international criminal justice a little more accessible and a lot more cool.