Last week, the African Union (AU) voted to grant immunity from prosecution to all African Heads of State and “senior officials” at the African Court of Justice and Human Rights. Predictably, the human rights and international justice world were up in arms. Some called it the “worst possible signal” to perpetrators of atrocities.

Members of the African Union have pushed for head of state immunity since Sudanese President Omar al-Bashir was first indicted by the International Criminal Court (ICC) in 2009. Their mission has only gathered steam since Kenyan President Uhuru Kenyatta, who is facing trial at the ICC, was elected in March 2013.

So what should we make of the AU’s efforts? Here are a few thoughts.

It would be easy, but generally wrong, to ascribe the AU’s motion to a bunch of cronies. There are cronies and they are leading the attack on the ICC. But ICC member-states in Africa aren’t exactly lining up to defend the Court. This seems symptomatic of a widening and deepening wave of discontent with international justice. And this frustration may yet grow amongst the citizenry of African states – ironically in part because the Court has been unable or unwilling to investigate and prosecute some African heads of state.

It wasn’t that long ago that Jean Ping stated that the AU was not against the ICC but “against Ocampo”, referring to the previous, often cavalier, former Chief Prosecutor of the ICC. Some had hoped that the election and tenure of Fatou Bensouda as new Prosecutor would help reconcile relations between African states. There is little evidence that it has and, for the Court and its proponents, that must be troubling.

Before any fervent human rights advocates rush to print placards declaring that African dictators are abandoning international justice, it behooves them to consider where the frustration of many African states comes from – and why it is so easy for generally pro-ICC states to stand idly by.  As I have argued before, there needs to be a re-imagination of that relationship from the Court’s side, along with new strategies for how the ICC communicates and prioritizes its relations with African states.

While proponents of international criminal justice shouldn’t interpret the AU’s vote as the work of a group of despots, it is likewise wrong to suggest that the vote reflects the African Union as a whole – let alone ‘Africa’. As Samuel Oakford observes,

Though the AU often projects itself and is frequently reported as a singular voice, the vote reflected a concerted push on the part of a minority of leaders, two of whom have been charged by the ICC. Kenya’s president Uhuru Kenyatta has been accused of fomenting ethnic violence that marred the 2007 elections, and Sudan’s President Omar al-Bashir has been charged with orchestrating genocide in Darfur. Both angled to weaken the African court’s ability to pursue heads of state and high level official[s].

Notably, this small group of vehement anti-ICC figures is willing to put more resources into their cause than their pro-ICC colleagues who, it would seem, are passively content to allow bluster and rhetoric to flourish whilst knowing that little will likely come of it (see below).

In its own right, this is a bad sign for international criminal justice. The path of least resistance amongst AU states is to side with, and not against, immunity for heads of state and anti-ICC resolutions. 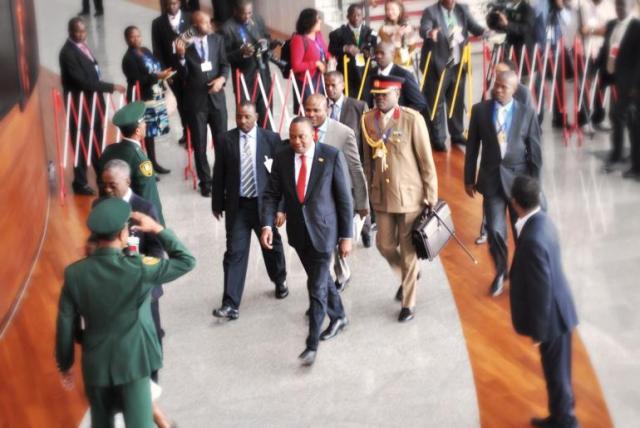 The Problem of International Justice is…

The problem with international justice is not that it does too much but that it is too limited: that there isn’t enough head of state accountability. Of course, this isn’t an issue that pertains specifically to the African continent, although it would be a welcome sign to see the likes of Uganda’s Yoweri Museveni (who insists that his list of sins is longer than Bashir’s), Rwanda’s Paul Kagame, and Zimbabwe’s Robert Mugabe held responsible for their alleged role in mass human rights violations. Former leaders like George W. Bush and Tony Blair are consensus candidates to be prosecuted for alleged crimes committed in Iraq and Afghanistan and very few proponents of international criminal justice would deny this.

Unfortunately, many dictators and despots around the world who long ago passed their democratic expiry dates can only gain an incentive from measures to ensure and protect head of state immunity. So too will “senior officials” who are covered by the AU’s resolution. That doesn’t sound like an particularly good recipe for democratic development. But maybe I’ve just read too much Chinua Achebe.

The new resolution warps the incentives of government leaders and senior officials to leave power. It thus not only hurts judicial accountability but undermines democratic accountability.

The AU’s resolution re-affirms a troubling pattern amongst those African states who have pursued international justice and accountability: justice is for their rebels adversaries and not for governments. This is also evident in essentially every self-referral by an African state to the ICC.

There is a striking correlation between self-referrals and the ICC targeting non-state actors. And it is equally notable that the most controversial cases for African states have come as a result of UN Security Council referrals which have primarily targeted governmental actors.

The AU’s amendment should thus be read not only as an attempt to grant government officials immunity but as a means to narrow the scope of retributive justice to those rebel groups that may threaten those African governments currently in power.

A primary problem of this uneven selection of targets is its effects on conflict resolution. The prosecution (or proscription) of one side and not the other when both are responsible for atrocities is unlikely to be conducive to peacemaking.

It is typical to hear that the core of the African Union’s criticism of the ICC stems from its belief that the Court’s has been far too selective when it comes to meting out accountability. There is no doubt that international criminal justice has been too selective to date. For every case the Court opens there are two that it should but can’t or chooses not to. Compounding matters, the ICC is constrained by its lack of financial resources and is over-stretched in its current caseload.

But it is important to differentiate between two types of selectivity. The first pertains to the selection of situations. Here the question is: why does the ICC investigate the conflict in northern Uganda but not the war in Afghanistan or why does the ICC intervene in conflicts in Africa but no where else? Sometimes the Court has no jurisdiction to open an investigation – as in North Korea or Burma. Other times, the Court sees opening an investigation as undermining its institutional interests.

While other situations that have been neglected may warrant attention, it is important to note that not a single Africa-based situation currently under the ICC’s purview doesn’t merit investigation by the Court. Moreover, while it is often observed that a significant majority are a result of African states self-referring themselves it is even more relevant that African states continue to do so, as Mali has shown. And if states can manage to continue having the ICC target their rebel enemies – and have the Court pay for it – then we should expect to see continued engagement between the ICC and African states.

Protestors voice their support for the ICC in Nairobi, 2011 (Photo: VOA)

In other words, the problem isn’t that the ICC investigates on African soil. The problem is that it sometimes targets heads of state and government figures.

This bring us to the second type of selectivity, which pertains to who the ICC investigates, i.e. the specific targets for investigation and prosecution. Here the question is slightly different: why Kenyatta and not Bush? Or why does the ICC target Joseph Kony but not Yoweri Museveni?

Insofar as this ensures that only non-state actors will end up in the dock, the AU’s resolution actually entrenches – rather than alleviates – selectivity.

Much Ado About Nothing?

The African Court of Justice and Human Rights is, at least for now, little more than a paper tiger. As Paul Bradfield notes, “it is a long way before it becomes an operational reality, or indeed handles any prospective cases”. There is still no agreement on where the Court should be based, how it should be staffed, or who would pay for it. The AU’s resolution may thus be more about political posturing than anything else. After all, states are aware that no regional tribunal’s statute could prevent the ICC from going forward with cases against heads of state or senior government officials.

At the same time, many African states have ratified the Rome Statute of the ICC and have implemented it into their domestic law. This would clash rather obviously with new legislation barring heads of state and government officials from prosecution. The question is: will their Supreme Courts be willing and able to make a fuss?

Last week’s resolution may have produced a certain angst amongst human rights and international justice advocates. But it is only the most recent in a line of dramatic acts by the AU (remember the walk-out threat?). Whether these ever amount to any tangible, institutional developments remains to be seen.

What really matters is the growing season of discontent amongst African states to the project of international criminal justice. The Africa-ICC relationship needs a dramatic rethink.

Mark Kersten is a consultant at the Wayamo Foundation, a Senior Researcher at the Munk School of Global Affairs, and a law student at McGill University Law School. He is also author of the book, 'Justice in Conflict - The Effects of the International Criminal Court's Interventions on Ending Wars and Building Peace' (Oxford University Press, 2016).
View all posts by Mark Kersten →
This entry was posted in African Union (AU), ICC Prosecutor, International Criminal Court (ICC). Bookmark the permalink.

4 Responses to What Gives? African Union Head of State Immunity