What Would A Hilary Clinton White House Mean for the ICC?

Whether it has been as First Lady, Senator for New York, or Secretary of State, Hillary Rodham Clinton’s political life has covered the most momentous contemporary developments in international criminal justice. So if she were to become the first-ever female President of the United States, what would Clinton’s tenure mean for the relationship between the ICC and the US? Would it be markedly different than what we’ve seen under Barack Obama?

Under Obama, the US has had an improved yet still mixed relationship with the ICC. The administration supported referrals of Libya and Syria to the ICC. In 2012, the State Department expanded its Rewards for Justice programme to include some individuals indicted by the Court. Even if it hadn’t initially intended to, Washington played an important role in the surrender and transfer of M23 leader Bosco Ntaganda to The Hague. It was also right in the thick of it when Dominic Ongwen, a senior commander in the notorious Lord’s Resistance Army, surrendered to African Union troops and was eventually shipped off to face trial at the ICC.

At the same time, the administration refused to endorse any UN Security Council referral of a situation to the ICC which did not explicitly prohibit the Court from investigating citizens of non-member states. It also continued the practice of endorsing immunity of its soldiers before the ICC, ensuring that its troops in Mali would never be prosecuted by the Court. While UN Ambassador Samantha Power was quick to heap criticism on Russia and China for ensuring that a referral of Syria to the ICC failed, the truth is that Power and her administration refused to do so for three years and had spoken out against doing so. Clinton herself stated that, while referring to Syrian President Bashar al-Assad as a “war criminal” was likely accurate, it also wasn’t useful. More recently, although its protests have been relatively quiet, the administration stood firmly against Palestine becoming a member-state of the ICC.

After six years, the Obama administration’s approach is notable for the fact that it has never developed or implemented a coherent strategy or policy regarding the ICC. This has allowed it to pursue a curious one-foot-in, one-foot-out position of supporting the Court when it comes at little cost (and potentially some benefit) and otherwise giving international criminal justice the cold shoulder.

There is no evidence that a Hillary Clinton White House would mark any significant shift in this approach. Historically, her record on the Court has been mixed – at best. 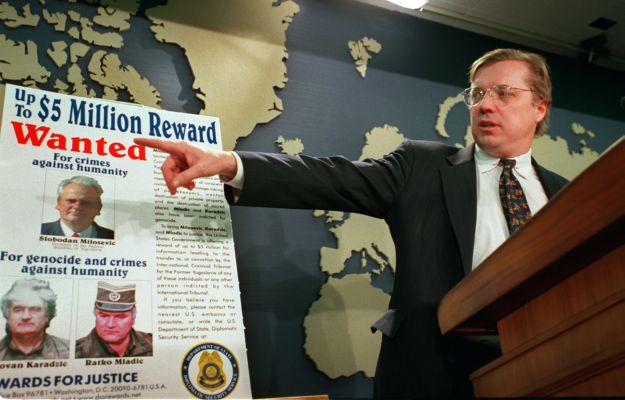 David Scheffer explaining the Rewards for Justice Program as it pertains to the ICTY (Photo: George Bridges / AFP / Getty Images)

In his must-read book, David Scheffer, Ambassador-at-Large for War Crimes Issues under President Bill Clinton, recounts his role as the head of the US delegation to the Rome Statute negotiations. Scheffer pushed for the Clinton administration to embrace the “bedrock principle” of complementarity wherein the ICC could only investigate crimes if the relevant state was not already doing so itself – or was not doing so genuinely. But the American diplomat had to contend with US officials, high on the fumes of late-1990s political exceptionalism, who wanted to see the Court guarantee full immunity for American citizens irrespective of whether the US became a member-state of the ICC or not. A seminal moment in the US’s approach to the ICC was determined in a meeting with First Lady Hillary Clinton and James Baker, who ardently argued for full immunity for US citizens:

… Baker then weighed in with the Pentagon’s view to hold firm on the long-standing American requirements. Hillary asked how the negotiations had gotten so convoluted, with such complexities over jurisdiction. Why not, she asked, just have a global war crimes tribunal modeled on the Yugoslav Tribunal on a world stage. I explained why the International Criminal Court would be a treaty-based court independent of the United Nations and that after years of negotiations the situation had changed as governments expressed their largely negative views about the Security Council controlling a judicial process.

… She absorbed without flinching Baker’s condescending warning that since the president finally understood the role of the military, if he were to support the Pentagon position President Clinton would earn the military’s permanent respect and allegiance. And that meant he needed to back the current U.S. insistence on full immunity from prosecution by the court as both a nonparty state and as a possible state party to the court. In rebuttal, I reminded her of the futility of trying to attain full immunity that would extend even to our status as a state party and that it was undercutting our credibility to achieve major objectives in the treaty. Hillary paused to reflect, thanked us, and told me she sympathized with how difficult my job would be in Rome. I saw that as a signal that she would advise the president to back the Pentagon’s futile position, and that is exactly what he did.

Eventually and at the tail-end of his tenure, President Bill Clinton signed the Rome Statute (it was ‘unsigned’ two years later by the Bush administration). But in the years following the creation of the ICC in 2002, Hillary Clinton’s record on the Court reflected the broad anti-ICC status quo prevalent in Washington. As a New York Senator, she voted in favour of the American Service-Members’ Protection Act which prohibited the US from cooperating with the Court in any way and authorized the President to use “all necessary measures” to repatriate any American citizen brought before Judges at the ICC. According to Scheffer, Clinton also supported applying punitive measures against states that supported the ICC, a policy that her predecessor as Secretary of State, Republican Condoleezza Rice later claimed was like “shooting ourselves in the foot”.

As the political winds shifted, so too did Clinton’s policies. By the mid-to-late 2000s, it had become unfashionable – or perhaps just pointless – to speak out against the ICC. This was especially true for officials within the Obama administration which eagerly presented itself as liberal and internationalist. One year after Obama was elected, Clinton, by that time Secretary of State, lamented the fact that the US stood outside the ICC system:

This is a great regret that we are not a signatory. I think we could have worked out some of the challenges that are raised concerning our membership. But that has not yet come to pass.

Two years later, as the ‘Arab Spring’ swept northern African and the Middle East, an initially hesitant Clinton forcefully argued for intervention in Libya. As part of a package of interventionary measures, the US, for the first time, voted in favour of a UN Security Council referral of a situation to Libya.

How should we read this brief overview of Clinton’s engagement with the ICC? A generous interpretation would conclude that Clinton had something of a political epiphany, at some point becoming convinced with the political utility and inherent value of the Court. A more probable view, one which takes into account the conservative strands of Clinton’s outlook and foreign policy, would counter that Clinton is a pragmatic and political chameleon, her approach to international criminal justice mirroring the broad consensus regarding the ICC in Washington.

Given her policy shape-shifting, it is hard to imagine any significant change in the US’s piecemeal engagement with the ICC under a Hillary Clinton presidency. Clinton – or whoever the next President is – will face some stark political challenges when it comes to international criminal justice. Most notably, the next President will have to confront the ICC’s investigation into the use of “enhanced interrogation techniques” by US officials in Afghanistan as well as the ongoing judicio-political saga between the Court, Israel and Palestine. No one should be fooled that Clinton will go out of her way to do the Court any favours.

7 Responses to What Would A Hilary Clinton White House Mean for the ICC?