Justice and Accountability in Syria: The Limited Options at Hand 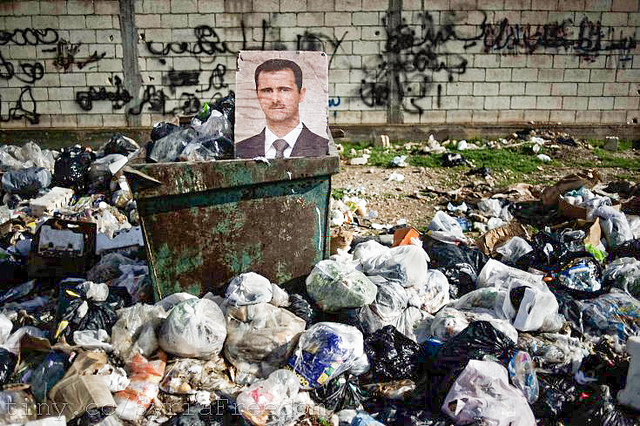 Atrocities continue to mount in Syria and the situation has become no less critical a year after the UN Security Council failed to pass a resolution to refer the situation to the ICC. Answers remain elusive, with different parties to the conflict continuing to perpetrate war crimes and crimes against humanity – including massacres of civilians, indiscriminate aerial bombardment, enforced disappearances, systematic torture, rape, and the use of children in hostilities. Meanwhile, the heavy focus on ISIS or Da’ash has detracted international attention from the broader humanitarian disaster, now turning the Mediterranean into yet another site of the Syrian tragedy.

Evidence continues to be collected assiduously by groups such as the Syria Justice and Accountability Centre and the Commission for International Justice and Accountability, the latter’s efforts sparking the claim a few weeks ago that enough evidence had potentially been accumulated to indict Bashar al-Assad and other high-ranking government officials. Yet the impact of this development is tempered by current political realities which seem to dictate that the possibility of firmly holding the regime to account will depend either on a transition in government, a political about-face within the Security Council – or both. With no end in sight to the ongoing atrocities in Syria or the political stalemate at the Security Council, it seems that for Syrians, akin to Kafka’s man before the law, access to justice under international law will remain unattainable in the foreseeable future.

With a transition in doubt, there is growing recognition of the need to explore alternative avenues towards securing justice in Syria and to move beyond the somewhat myopic focus on a Security Council referral of the situation to the ICC, and the assumption that the Court is the only game in town.

Against this backdrop, the joint report recently launched by the Ceasefire Centre for Civilian Rights and the Syria Justice and Accountability Centre evaluates the feasibility and potential impact of the various current accountability options for crimes under international law committed in Syria. Acknowledging that the pursuit of justice does not take place within a vacuum, the analysis teases out the practical and ethical challenges presented by these options by briefly exploring how different approaches to justice and accountability could interact with conflict dynamics and affect a future transition in Syria.
As mentioned above and explored in detail elsewhere, there are constraints on the practicality and efficacy of the most prominent mechanisms for securing justice in Syria. The current realities generally forestall the use of domestic prosecutions, which will likely only become a widespread option in the distant future. An ICC investigation with jurisdiction over the entire Syrian situation does not appear to be possible now or in the near-term. However, as the report details, involvement of the ICC is still hypothetically an option, as the Court could still exercise jurisdiction over the thousands of nationals of states parties to the ICC who are fighting in Syria. Still, even if a high-ranking foreign member of an opposition group or senior Syrian official with dual nationality came under the ICC’s jurisdiction, this would raise the thorny question of how such a limited investigation might affect Syrian perceptions of international justice in general and the ICC in particular, especially if those most culpable are seen to be out of reach of prosecution.

More recently, the debate on securing justice has turned to the possibility of developing a special or hybrid tribunal for Syria, an option that has gained ground since the drafting of the ‘Chautauqua Blueprint’ in August 2013. Proponents have emphasised the flexibility and reach of hybrid tribunals, institutions which can combine international and domestic laws while also potentially allowing for a greater number of prosecutions than at the ICC. Yet, as the report suggests, a hybrid tribunal in the present context would not be a particularly feasible or prudent route towards achieving accountability for victims of the Syrian crisis. Absent the possibility of developing such a tribunal in Syria at present, there is the potential to do so in a neighbouring country – for example, Turkey or Jordan – or within an internationally protected buffer zone in Syria if one was to be created (which appears unlikely). Nevertheless, attempts to develop a hybrid tribunal now would be met with the practical challenges of transcending UN political dynamics, as well as potential difficulties convincing a neighbouring state to take on the political, financial, and logistical burdens that such a tribunal would impose. In all likelihood, a premature hybrid tribunal would be dismissed by many Syrians due to its lack of impartiality – whether in fact or as a matter of Syrian perceptions – and scupper the chances for a more effective tribunal in the transitional period.

The report also points out that a less explored accountability option is the use of foreign courts outside Syria to pursue criminal prosecutions and civil actions. In a context where the prospect of a more comprehensive approach towards securing justice appears bleak, foreign courts may prove a useful first step towards accountability. National prosecuting authorities in foreign (particularly European) countries may be able to pursue criminal investigations into crimes in Syria so long as they fall under one of the several principles of extraterritorial jurisdiction. For example, Sweden recently applied universal jurisdiction to the Syria conflict, convicting a Syrian rebel fighter of war crimes. Civil courts, on the other hand, could provide monetary redress to those seeking justice for violations perpetrated during the conflict.

There are, however, limitations to the use of foreign courts which, in any case, only offer a piecemeal approach towards justice and accountability. Sovereign immunity shields the highest-level officials, including Assad himself, as long as he remains in power. Difficulties may also emerge from the due process implications of trying suspects in absentia, which could prevent foreign courts from trying perpetrators who cannot be physically apprehended. Meanwhile, restricted investigative access might affect the quality of evidence available to international actors, which raises questions about whether such evidence would be enough to garner a conviction without further corroboration. And for cases that might proceed, further challenges are presented by the demands of witness protection and ensuring a measure of Syrian ownership and involvement in the process.
In examining current accountability options for crimes under international law in Syria, it is clear none would offer a panacea for securing justice. Each avenue privileges a particular approach or conception of justice, inviting its own practical and ethical challenges. While the report concludes that the use of foreign courts is the most feasible option for immediately pursuing some form of accountability, it also emphasizes that any attempt to secure justice in Syria must try to connect with the Syrian people. This is not only to pave the way for other, possibly more comprehensive accountability mechanisms that become available in time, but also because perspectives on justice may shift in Syria. While a recent SJAC report suggests general support amongst the Syrian population for retributive forms of justice alongside ‘traditional reconciliation approaches’ such as Sulha and Musalaha, views can change over time – or give way to calls for vengeance.

In spite of the various challenges, prosecutions in foreign national courts – particularly if several jurisdictions worked in coordination while also connecting Syrians with the process – may be able to provide justice for some victims and even start to dismantle the impunity that currently shields nearly all the major perpetrators. They may also help to maintain international pressure. As the international imperative of suppressing the ISIS threat is already leading to a reappraisal of priorities and potential partners in the Syria crisis, such an approach may also help to forestall the political rehabilitation of, or award of amnesties to, those responsible for crimes against humanity.

Despite the urgency of pursuing justice and accountability immediately, postponement is clearly preferable to an inherently flawed process that fails to meet the needs of the Syrian people. But such a conclusion must only be reached after careful examination of all available steps towards securing justice and accountability, including some that are feasible now. Failure to do so risks entrenching the Security Council as the gatekeeper to justice in Syria.

Mark Kersten is a consultant at the Wayamo Foundation, a Senior Researcher at the Munk School of Global Affairs, and a law student at McGill University Law School. He is also author of the book, 'Justice in Conflict - The Effects of the International Criminal Court's Interventions on Ending Wars and Building Peace' (Oxford University Press, 2016).
View all posts by Mark Kersten →
This entry was posted in Guest Posts, ISIS, Justice, Syria, Transitional Justice and tagged Bashar al-Assad, Da'ash, Mark Lattimer, Shikha Dilawri. Bookmark the permalink.

3 Responses to Justice and Accountability in Syria: The Limited Options at Hand