A Turn to the “Symbolic” at the International Criminal Court 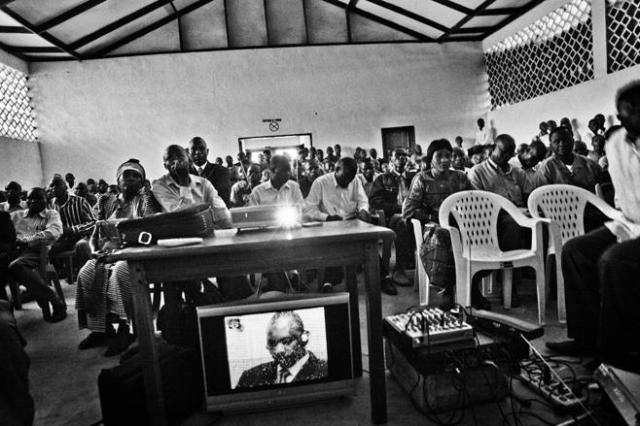 People in the Ituri district of the Democratic Republic of Congo watch proceedings against Thomas Dyilo Lubanga, the first individual put on trial at the International Criminal Court (Photo: Marcus Bleasdale/VII/HRW)

You don’t have to be a critic of the International Criminal Court (ICC) to accept that its first fifteen years have been rough. The institution’s ability to deliver on its mandate of ending impunity for war crimes, crimes against humanity, and genocide hasn’t gone according to plan. Not even close. Now, it seems, the Court is trying a different tack.

Some blame the ICC’s limitations on the system of global politics, others on the Court and its staff. Some see the ICC’s deficiencies as growing pains to overcome, others as an signal to ditch the whole project altogether. Some want to throw out the bathwater, but hold onto the baby. Others would happily ditch both. But whatever side you’re on, it is undeniable that the Court’s achievements, impressive as some of them may be, are modest in comparison to the lofty expectations that its brand of international criminal justice would prevent and deter mass atrocities. Given this reality, the ICC is under intense pressure to remain a pertinent player on the international stage. It shouldn’t be surprising that, in order to do so, it is shifting strategies.

What many critics of the ICC get wrong is their assumption that the individuals who make up the Court, at the highest levels, are oblivious to the institution’s shortcomings. Rightly or wrongly, ICC staff won’t transparently publicly communicate the tribunal’s failures (although, if you’re willing to listen, they’ll often imply them). But it isn’t as if the collapse of all of the Kenya cases or the continued freedom of the likes of Sudanese President Omar al-Bashir or Joseph Kony of the Lord’s Resistance Army, somehow flies over their heads. They hear — and surely feel — the criticism that the Court is one-sided and too dependent on political power. They understand that they are at once seen as leading an institution that runs roughshod on state sovereignty and intervenes too forcefully as well as being too delicate and intervening too infrequently.

This isn’t to defend the institution, but it is to say that it’s not a great hall of deaf ears. Indeed, the internalization of criticisms and shortcomings seems to have affected how the ICC views implementing its mandate. What else can you do when your record on the hardest, yet most important cases, is dreadfully poor but there aren’t any obvious signs that it will improve in the future?

Under the tenure of current chief Prosecutor Fatou Bensouda, we are witnessing a turn to the symbolic resonance of the institution. This can already be seen in how Bensouda addresses institutions like the United Nations Security Council. But it is deeper than that, affecting the nature of the cases the Court’s prosecutors select. Rather than flooding the institution with more arrest warrants, more investigations, and more trials, Bensouda has pumped the brakes. Under her guidance, the Office of the Prosecutor is purposefully limiting itself in the number of trials they initiate and the number of investigations they open. But it won’t be any less active. The Court is pitching itself as an institution that will tackle crimes that are of the greatest salience to the international community, measured, presumably, by the amount of global attention these crimes receive. These include the institution’s interest in prosecuting the use of child soldiers, the perpetration of sexual and gender based violence, the destruction of cultural property and antiquities, and, most recently, environmental crimes and land grabs. It is no secret that, to date, the ICC’s ability to deter, prevent, or even address these crimes has been severely limited. But it increasingly views its role as elevating the relevance of these crimes and, in the process, elevating the relevance of itself as an international organization and international court.

The wisdom of this turn to the symbolic can’t yet be known. But it surely won’t suffice if the ICC only appears to be dealing with thematic crimes of interest to global audiences. In other words, the symbolic turn can only be a success if it manages to wed the symbolic to the effective and the international interest to the local impact. It may be a wise strategy for now, but it must lead to concrete results: increased cooperation during investigations, the enforcement of arrest, and senior perpetrators in the dock. The Court’s success will ultimately be measured by the institution’s effects on the ground and its impact on victims and survivors — and not whether it resonates with an abstract international community.

This article was originally posted as part of my ongoing bi-monthly column at Justice Hub, Courtside Justice.