Burundi’s Awkward — and Mostly Pointless — Farewell to the ICC 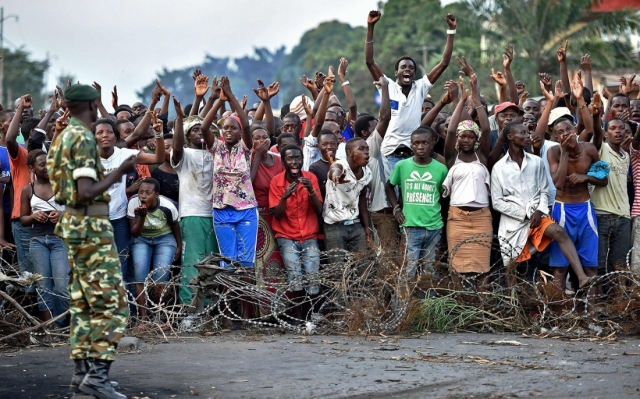 A government led by a President accused of mass human rights violations and crimes against humanity is seeking to end its relationship with the International Criminal Court (ICC). No, the President insists, this is not about hiding from justice. Instead, Pierre Nkurunziza maintains, it is because the Court is biased against Africa. His plan, however is likely to backfire. Nkurunziza and his henchmen cannot escape ICC justice, even if they do withdraw. Moreover, their tirade against the Court may have the unintended consequence of bolstering the fledgling institution’s legitimacy.

Political violence in Burundi has escalated since Pierre Nkurunziza sought a third term as president last year. Estimates suggest that hundreds of civilians have been killed and as many as 300,000 have fled the country. Full details are hard to ascertain in part because the government has denied human rights officials access to the country. Nevertheless, the unrest spurred ICC prosecutors to open a preliminary examination into the violence. Since then, investigators have been monitoring the situation in Burundi and going through the motions of deciding whether or not an official investigation, one that would almost certainly lead to an arrest warrant being issued against Nkurunziza, should be opened.

The Burundian government may be under the false impression that withdrawing from the ICC would curtail the Court’s ability to open an investigation into past and ongoing violence in the country. It would not. On the contrary, the Court can investigate all alleged crimes that have been perpetrated to date as well as any crimes committed one year from the day that the Burundi deposits its notice of withdrawal at the United Nations.

The legal details are murky but as former senior ICC official and current Harvard Professor Alex Whiting points out, Burundi’s threat of withdrawal is likely to act as an incentive for the ICC to speed up its decision and open an official investigation in the violence in Burundi. Of course, Burundian officials may simply not care about such legal vagaries. They most certainly won’t be letting any ICC investigators into the country and, given the ICC’s record, won’t fret any condemnation from the Court over their non-cooperation. But if the goal was to avoid ICC scrutiny altogether, the Burundian government’s anti-ICC tantrum could seriously backfire. What may have been left in the potential purgatory that is an ICC preliminary examination is now likely to be transformed into an official investigation by the Court.

Few, moreover, buy Burundi’s claim that their departure is due to the ICC’s alleged bias against African states. While the relationship between the ICC and Africa has been tumultuous and controversial, Burundi’s threat comes at a time when relations seem to be improving.

At the most recent African Union Summit, the issue of a “mass withdrawal” from the ICC didn’t reach the agenda of African heads of state, in large part due to the work of a committed group of African diplomats. The Court’s most recent case, its prosecution and conviction of Ahmad al Mahdi al Faqi for the war crime of destroying cultural antiquities in Timbuktu, would not have been possible without the concerted cooperation of Mali and Niger. At the same time, requests from African governments to have the ICC intervene have not abated. Just last month, Gabon officially requested that the ICC examine its recent bout of post-election violence. Jean Ping, an early leader of the anti-ICC movement within the African Union, welcomed a role for the Court in ascertaining responsibility for atrocities. It is also notable that African states have remained virtually silent as news spread that Burundi was likely to become the first African state to withdraw from the ICC.

There are real problems in the relationship between the ICC and African states, and developing nations more generally. The claim that the Court is too close to major powers is a legitimate criticism, even if that may be slowly improving. Again, however, Burundi’s withdrawal deflects from the legitimate concerns that many have regarding the ICC’s interventions.

The Court and its proponents have consistently declared that any anti-ICC rhetoric on the continent is the work of dictators afraid of the Court. It is, they claim, not a true reflection of how Africans feel, but the invention of the likes of Sudan’s Omar al-Bashir (indicted by the ICC for war crimes, crimes against humanity, and genocide) and Zimbabwe’s Robert Mugabe (who virtually all human rights advocate would like to see face justice one day). This brandishing of criticism of the ICC as the singular work of a handful of African leaders is, rightly, offensive to many who hold real and genuine concerns regarding the efficacy of the Court on the continent. But Nkurunziza’s decision to withdraw from the ICC at exactly the moment when his goons attack civilians fits, like a glove, into the narrative that the ICC and many of its supporters wish to portray: that any anti-ICC sentiment is simply trumped-up invective from African dictators and despots with something to hide.

It can’t be discounted that the Burundian government simply doesn’t care. Perhaps they’ve thrown reason to the wind and embraced their potential pariah status. Indeed, one would imagine that, if they were really serious about withdrawing from the ICC, they would have already. All it requires is for the government to deposit a notice of withdrawal at the UN — something the government has yet to do. It remains unclear what, exactly, Nkurunziza’s rationale is. But rarely has an act of this magnitude seemed so awkward, mostly pointless, and self-defeating.

This article was originally published as part of my bi-monthly column, CourtSide Justice, at Justice Hub.