‘We Stay. We Respond’ – A Speech on Africa and the International Criminal Court

The following is a speech delivered by Njonjo Mue to the plenary session of the Assembly of States Parties of the International Criminal Court. Njonjo is a human rights lawyer and transitional justice expert. He is currently a Senior Advisor to Kenyans for Peace with Truth and Justice (KPTJ) and serves as the Chair of the Kenyan Section of the International Commission of Jurists. 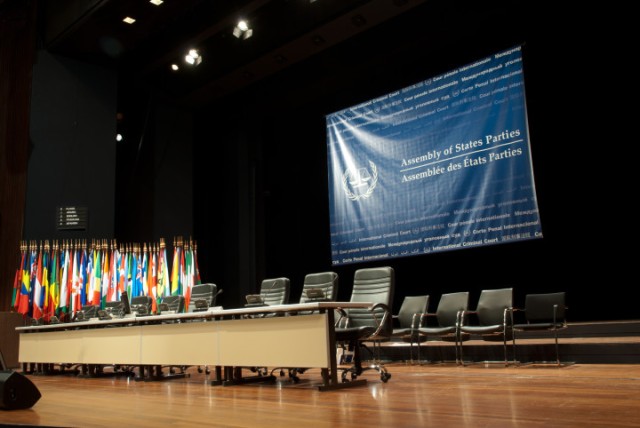 When I received news of South Africa’s intention to withdraw from the Rome Statute, like all other people who have dedicated their lives to the fight for human dignity and accountability around the world, I was deeply saddened.

I also remembered an incident that occurred during the negotiations that led to majority rule in South Africa, held at Kempton Park, Johannesburg. The then State President F.W. De Klerk had made some remarks that greatly offended Nelson Mandela. In fact, I have never seen Mandela so angry in public. But what was Mandela’s response to De Klerk? He did not storm out of the hall; he stood and walked majestically to the podium and confronted De Klerk firmly and honestly. That is the African way: We do not withdraw and walk away; we stay and we respond.

Mr. President, there have been long-running allegations that the International Criminal Court targets Africa. These allegations have often been met by recounting statistical evidence to the contrary, by recalling that most of the African cases at the ICC were referred to the Court by African states themselves. But I would like to respond here by giving another statistic. As of August 2016, there were 16 UN Peacekeeping Missions around the world. 9 of these are in Africa. This comprises 56% of all missions. We know that Africa does not make up 56% of the global population, but I have never heard anyone claiming that the UN is targeting Africa. Could it be that the like the UN, the ICC is most active where it is most needed?

We all know from recent history that the need for post-conflict justice is self-evident. Where there is no accountability, where warlords fighting for power know that they will not be held to account, there is no motivation to end conflict. And if there is a pause in the fighting, without justice, the ensuing peace is ever only temporary. This was amply demonstrated in Sierra Leone where the Lomé Peace Agreement of July 1999 included a blanket amnesty for combatants. It was just a matter of time before fighting resumed. When accountability was introduced into the equation through the establishment of the Special Court for Sierra Leone, sustainable peace was assured and continues to hold to this day.

Part of the grievance by African states against the ICC flows from a deeper pathology of governance in Africa where what is regarded as bad for the leader of a particular country is automatically assumed to be bad for the entire state. It also flows from a narrow and outdated definition of sovereignty that dictates that states should be left to mind their own business no matter how the decide to do so. But sovereignty is not a blank cheque nor can sovereignty mean that African states – whether governments or warlords – should be free to brutalise, murder, rape and loot from their own people in pursuit of power and resources without consequence.

The AU political leadership regularly complains about the role of the ICC in Africa. But these conversations are held behind closed doors in Addis Ababa and in other African capitals. Spaces where civil society and the press, let alone ordinary citizens, have to struggle to gain access. The tone of the communiqués that are issued after the AU summits make it clear that the leaders are speaking from their own perspectives. But who speaks for the victims?

The ICC is our court, created through the demand and with overwhelming support of African states, governments and civil society alike, to try to overcome their own legacies of massive human rights violations, including apartheid, genocide and multiple civil conflicts. It is time to tell those who complain that the Court is targeting Africa that the true position is that it is rather African victims who are accessing their Court in pursuit of justice. This is especially true when we remember that the ICC is a court of last resort which only intervenes where states are either unwilling or unable to investigate and prosecute serious crimes according to the principle of complementarity. There is a simple answer to African states that feel ‘targeted’ by the ICC to address the situation: Prosecute atrocity crimes occurring in your territories or committed by your nationals and deliver justice to the victims at home.

But this said, ICC is not a perfect institution. We should also remember that the Court is a small island of law that exists in a vast sea of politics. And as with all islands, sometimes the tide rises and the storms blow and the waves of politics come crashing onto the shores of the law and this clearly presents some challenges. There are three notable examples this:

First is the role of UN Security Council in referring cases to the ICC and deferring ongoing cases. 3 of the 5 permanent members of the Security Council are not members of the Rome Statute and yet they have the power under the Rome Statute to refer other states, including non-members, to the ICC as they have done with Sudan and Libya. This is clearly problematic. The situation is exacerbated by the fact some members of the Security Council have used their veto power to prevent serious crimes taking place in countries such as Syria from being investigated by the ICC. This blatant display of double standards that sacrifices the demand for justice at the altar of geo-strategic interests of the great powers can only hurt the global fight against impunity.
Second, there have been differing interpretations of the role of Head of State immunity in the Rome Statute system. While Article 27 of the Rome Statute is clear that official capacity as a Head of State or Government, a member of a Government or parliament, an elected representative or a government official shall in no case exempt a person from criminal responsibility, some have argued that this contradicts Article 98 which seems to recognize head of state immunity under international law.

Third, there is the alleged targeting of Africa and the perception of bias against African countries that I have already discussed above and will return to in a moment.

How can these challenges be addressed in a meaningful way that leads to the strengthening rather than the weakening of the Rome Statute system and the International Criminal Court?

While the complaint against the role of the UN Security Council is legitimate, it is usually misplaced.  Failure to refer situations such as Syria while referring those in Sudan and Libya are not the fault of the ICC. They are a result of imbalance in global power relations and the maintenance in place of an outdated global peace and security architecture inherited from the post WW2 arrangement.

There is need to revive and continue the debate on UN Security Council reform in order to make UN decision-making more reflective of the realities of the 21st Century. African countries need to direct their firepower at the real source of the problem; at the UN, not the ICC. We don’t treat a brain tumor by amputating a leg! The 3 members of the P5 must also continue to be encouraged to join Rome Statute in order to make the ICC a truly global mechanism for pursuing justice for victims of serious crimes.

On Head of State immunity, it is a cardinal principle of international criminal justice since Nuremberg that there cannot be immunity for persons who commit atrocity crimes. To grant them immunity would defeat the whole purpose of the system that has been painstakingly put together to ensure that there is accountability for crimes that shock the conscience of humanity. However, a conclusive interpretation of the Rome Statute on the issue of immunity needs to be sought by way of an advisory opinion from the International Court of Justice. This will clarify the law and place the pursuit of accountability on a firm footing. I am grateful to my friend Allan Ngari of the Institute of Security Studies for drawing my attention to this point.

On the perceived focus on Africa by the ICC, the Court needs to expand its scope beyond Africa and address violations wherever they occur in countries within its jurisdiction. While recognizing that each situation is unique, the Court also needs to demonstrate that it treats all countries equally. In this regard, it has been difficult to explain why a country such as Colombia has been under preliminary examination for 12 years, while the Court moves much faster in opening investigations in other situations. I am not suggesting that the court open investigations elsewhere for the mere purpose of filling a quota or demonstrating impartiality. I am saying that when one looks at the conflict map around the world, one clearly sees that it extends to parts beyond Africa and the Court’s reach needs to mirror that map.

In conclusion, Mr. President, I wish to end where I began, with the image of Nelson Mandela walking majestically to the podium at Kempton Park when he could have stormed out of the room. The ICC is not just struggling under the weight of a legacy of impunity on our continent; it is also struggling under the weight of history. There are strong sentiments among African peoples driven by legacies of racism, domination and exclusion. These sentiments are real and they cannot, and should not be wished away. Like Mandela, all Africans in this room have at one point or another in our lives been insulted, discriminated against or victimized because of the colour of our skin. But when this has happened, when we have felt unfairly treated, we have not walked away from the problem, we have confronted it. We have been part of the solution to the myriad challenges confronting us as members of the human family and in so doing, we have often shown others the way.

All African ICC member states must do the same. They must work within the Rome Statute structures to improve an International Criminal Court that is needed more desperately now that when it was first created.