Picture This: The ICC Trial of a “Delusional” Gaddafi

Today we get the news that an American diplomat has called Libyan President Muammar Gaddafi “delusional”. That makes enough sense. Gaddafi has denied that virtually anything bad is in Libya, playing a game of “if I can’t see it, it doesn’t exist.”

Earlier this week, the UN Security Council referred the situation in Libya to the International Criminal Court. In the next few days, the Court’s chief Prosecutor, Luis Moreno-Ocampo will decide whether or not to open a full investigation into events in Libya since February 15 2011.

Human rights trials, or war crimes trials as they are also referred to, have had their share of claims bordering on the absurd. In the last years of the trial against Slobodan Milosevic at the International Criminal Tribunal for the Former Yugoslavia [ICTY], the former Serbian leader was overcome by paranoia. In one letter to Sergei Lavrov, the Russian Foreign Minister, Milosevic wrote:

“[The ICTY] would like to poison me. I’m seriously concerned and worried…I am writing you and asking you for help in the protecting for the criminal activities being perpetrated in the institution operating under the sign of the United Nations.”

Liberian warlord Charles Taylor, who is on trial at the Special Court for Sierra Leone for some of the most horrendous crimes committed against civilians, has stated that he is a man of humanity and not a murderer or terrorist:

“It is quite incredible that such descriptions of me would come about. Very, very, very unfortunate that the prosecution — because of this information, misinformation, lies, rumors — would associate me with such titles or descriptions…I am a father of 14 children, grandchildren, with love for humanity.”

In a similar vein, Gaddafi responded to a BBC reporter’s question about protests against the regime in Libya that:

“No-one is against us. Against us for what? Because I’m not a president. They love me. All my people are with me, they love me all. They will die to protect me, my people.”

I think that it is fair to say that if – and it remains a big if – Gaddafi is ever brought to the ICC to stand trial, he will be the single most delusional character brought in front of an international tribunal in modern history since Rudolf Hess, the Nazi official who stood trial at the Nuremberg Trials despite being mentally unstable.

So what would a trial of Gaddafi look like?

I decided to have a little fun, so please remember that this is not, in any way, intended to trivialize recent events in Libya.

Based on his recent interviews with the BBC and other Western media, an interrogation could look like this:

Prosecutor: As the leader of Libya…

Prosecutor: Were you aware of soldiers shooting live ammunition at protesters in Tripoli and Benghazi?

Gaddafi: What soldiers? I have no soldiers. What protesters? There are not protesters. Everyone loves me.

Prosecutor: You ordered planes to bomb civilians. That is not love.

Gaddafi: What planes? You are on hallucinogenics like the al Qaeda children who are against my people.

Prosecutor: Will you respect the process of this court?

Gaddafi: What court? Do you see a courtroom?

Prosecutor: Yes. We are in a courtroom.

Gaddafi: No! This is al-Qaeda. This courtroom is on drugs! [behind sunglasses] If I cannot see you, you cannot see me.

Okay, so it probably won’t break down that way. But Gaddafi might still be the first leader on trial to don sunglasses since Taylor wore his infamous aviators in the early days of his case. Which brings up another question: why is it that so many individuals charged with war crimes and crimes against humanity wear their sunglasses inside?

Nuon Chea of the Khmer Rouge, also known as "Brother Number Two", was second in command to Pol Pot during the Cambodian Genocide (Photo: Yahoo) 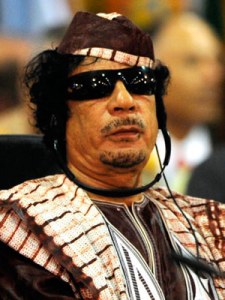 Gaddafi has shown a strong taste for sunglasses (Photo: Esquire) 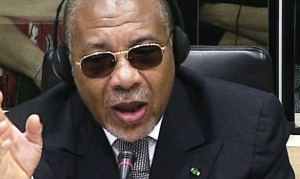 Charles Taylor, in sunglasses, at the Special Court for Sierra Leone (Photo: Sierraeye.net)

Goring (in sunglasses, left) and Rudolf Hess (right) at the Nuremberg Trials

Mark Kersten is a consultant at the Wayamo Foundation, a Senior Researcher at the Munk School of Global Affairs, and a law student at McGill University Law School. He is also author of the book, 'Justice in Conflict - The Effects of the International Criminal Court's Interventions on Ending Wars and Building Peace' (Oxford University Press, 2016).
View all posts by Mark Kersten →
This entry was posted in Human Rights, Humour, ICTY, International Criminal Court (ICC), Libya, UN Security Council. Bookmark the permalink.

4 Responses to Picture This: The ICC Trial of a “Delusional” Gaddafi