Sexual and Gender-Based Violence: The Case for Expertise and Professionalism in Investigations

Andras Vamos-Goldman joins JiC for this post on the challenges of investigating sexual and gender-based violence crimes. Andras is the Executive Director of Justice Rapid Response, a public-private partnership that provides criminal justice and human rights professionals from a global, stand-by roster to the international community to improve the investigation of mass atrocity crimes. 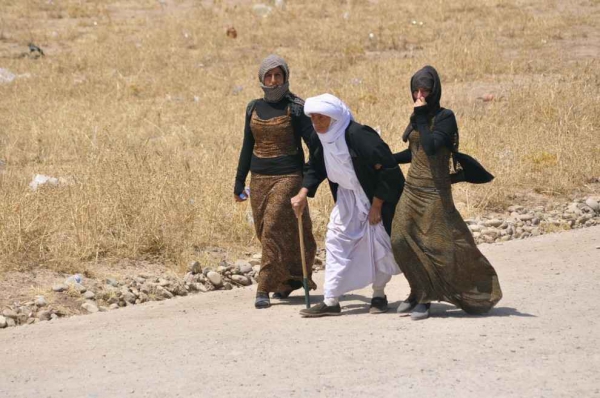 Yazidi women in Iraq, 2014. Many Yazidis were forced to flee after attacks by ISIS forces. (Photo: Domenico/flickr)

Crimes of sexual and gender-based violence (SGBV) committed in the context of the world’s many conflict situations are no longer beyond the reach of accountability. Jurisprudence, especially from the International Criminal Tribunal for Rwanda (ICTR), the International Criminal Tribunal for the former Yugoslavia (ICTY), the Special Court for Sierra Leone (SCSL), as well as the Rome Statute and the work of the International Criminal Court (ICC) have all contributed to breaking down the false myth that “rape in war is regrettable, but unavoidable”. Pressure from survivors, political attention from states, and personal commitments by high-profile individuals have taken the question of addressing SGBV from the halls of academia to the world’s attention. But the single most important factor in taking SGBV investigations from the fringes to the center of investigating mass atrocities in recent years is the ready availability of experienced criminal justice professionals with a background in dealing with the many aspects SGBV. This mean having professionals from every part of the world, with training to work under international criminal and human rights law frameworks and conditions.

One catalyst in this rapid expansion of international capacity to address accountability for SGBV violence in conflict is the UN Women – Justice Rapid Response (JRR) partnership (full disclosure: the author is the director of the latter). This partnership manages and can rapidly deploy from a stand-by roster of currently 217 SGBV justice experts and has already done so on 67 occasions since its inception. While not the only roster that can support work in this critical area, it is the only one where expertise dedicated to SGBV investigations represents every region and legal system in the world—roster members hail from 73 countries. It is also the only roster in which every member, already recruited for their expertise, has been further upskilled to be able to work productively under international legal frameworks and conditions.

This week, JRR and UN Women are launching a short documentary about the work of two such professionals that the partnership deployed to support accountability in the context of the conflicts in Syria and Iraq. Being first shown in the context of the UN Security Council open debate on women, peace and security, the documentary is meant to highlight the benefits and impact—especially to survivors—of investigations into patterns of forced marriage, rape, trafficking and sexual slavery being done by professionals.

The importance of expertise and experience, specialized international training and cultural, legal and linguistic affinity for the places and people where the alleged crimes occurred is even greater today than ever. This is because we appear to be in a paradigmatic shift, where documentation, fact-finding, and even investigations are preceding—not following—the establishment of accountability mechanisms.

This shift seems, in part, to be driven by too few opportunities to hold perpetrators of mass atrocity crimes to account. But it is also creating a serious gap because it is the accountability mechanisms that traditionally establish the rules of procedure and evidence that set the parameters for documenters and investigators on gathering information. Without such rules of evidence (and in the absence of accepted international standards), it mainly comes down to the judgement of those doing the documenting, fact-finding and investigating that will ensure that vital lines are not crossed. Lines such as not taking or accepting information that may have been attained by torture or the fabrication of evidence; and not paying sufficient regard to the danger that its collection poses to victims, witnesses, survivors and those collecting the information – the “do no harm” principle.

There is one other reason why having experienced professionals readily available to the international community is more vital than ever. These experts are also in a position to provide mentoring support to enhance the capacity of other actors. Enhancing capacities has become crucial in both the context of national proceedings relating to international crimes and crisis situations where organizations such as humanitarian responders are the first to come into contact with survivors of conflict related crimes.

The Rome Statute system of international criminal justice is built on the primary responsibility of States to investigate and prosecute core international crimes. The justice systems of most States that have experienced conflict violence to the level of atrocity crimes need technical assistance to become able to carry out this responsibility. Helping national jurisdictions to conduct credible investigations and prosecutions is, therefore, the ideal way to ensure the realization of the complementarity principle — the foundation of the Rome Statute system. This, in turn, is best attained through dedicated, tailored, peer-to-peer mentoring by expert professionals, rather than short, off-the-shelf training courses.

Such tailored mentoring has also been shown to be extremely useful for civil society and humanitarian providers, who are often the first to hear firsthand the experiences of survivors. Without trying to make these organizations into “international investigators”, it is important for them to understand what they may be hearing in the international criminal and human rights context, and have some basic guidance on where to safely channel such information (if possible) and more importantly, how to take simple steps to minimize the danger that such stories may represent to the witnesses and themselves. Here too, lasting capacity enhancement is best done through peer-to-peer mentoring by expert practitioners.

What the work of SGBV Justice Experts has shown in all the above contexts is that the more professional and experienced the people involved, the more likely that they will ask relevant questions as and when the information is collected or passed. The more these professionals understand international human rights and criminal justice norms and international conditions, the more likely they will be able to balance the probative value of information against the potential cost of harming witnesses and survivors and the more suited they will be to collaborate with local counterparts and humanitarian responders to provide lasting capacity enhancement through tailored peer-to-peer mentoring.

In these shifting times, when evidence collection is increasingly preceding the establishment of specific rules of procedure and evidence, it is vital that the documentation and collection of information for accountability purposes be done, and supervised, by professionals. Professionals who understand the importance not only of the information, but also how it is collected, while taking steps to minimize ‘collateral damage’ are much less likely to do harm to the justice process. While facilities like the JRR-UN Women Justice Experts Partnership are there to ensure the ready availability of needed professionals, ultimately the standard they set on getting the right experts to the right place at the right time needs to be practiced by everyone engaged in documentation, fact-finding and investigation of core international crimes. It is the only way to build a solid foundation of credible evidence for accountability, upon which our collective promise not to tolerate impunity for the worst crimes known to humanity can rest solidly.

Mark Kersten is a consultant at the Wayamo Foundation, a Senior Researcher at the Munk School of Global Affairs, and a law student at McGill University Law School. He is also author of the book, 'Justice in Conflict - The Effects of the International Criminal Court's Interventions on Ending Wars and Building Peace' (Oxford University Press, 2016).
View all posts by Mark Kersten →
This entry was posted in Investigations, Sexual and Gender Based Violence and tagged Andras Vamos-Goldman, Justice Rapid Response. Bookmark the permalink.

2 Responses to Sexual and Gender-Based Violence: The Case for Expertise and Professionalism in Investigations