From the Sword of Damocles to Acupuncture Needles – A Commentary on Pressure Point: The ICC’s Impact on National Justice

Nelson Camilo Sanchez-Leon joins JiC for the third post in our ongoing joint symposium with EJIL:Talk! on the ICC’s impacts on national justice. Camilo is an Assistant Professor at the University of Virginia School of Law. This piece is greatly influenced by his experience of more than a decade of research and advocacy in Colombia with Dejusticia. He thanks Rachel Davidson Raycraft and the blog editors for comments on a draft version of this post. Opinions expressed are solely his own. 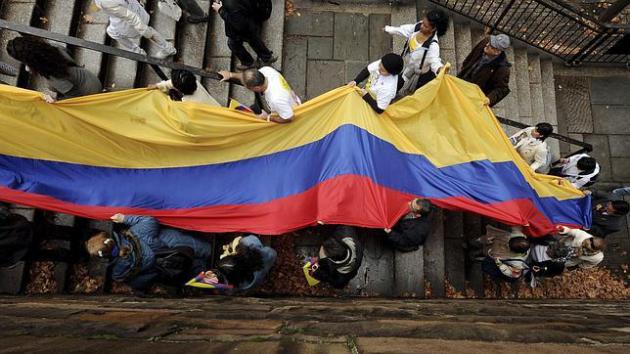 Twenty years since the adoption of the Rome Statute, the concept of “positive complementarity”—the idea that the International Criminal Court (ICC) and national authorities should collaborate to form a two-tiered response to impunity—still represents a bone of contention among scholars and practitioners of international criminal law.  Beyond the academic and legal debates over its meaning, it is clear that the ICC’s Office of the Prosecutor (OTP) plays an unusual role in operationalizing the complementarity principle both in policy and in practice.  I argue that advancing the OTP in this role, requires comprehensive policy analysis and a critical eye toward case-specific advocacy.

The Pressure Point report recently released by Human Rights Watch (HRW) acknowledges the OTP’s thorny task of bolstering national capacity to combat impunity for serious crimes.  The ICC Prosecutor must strike a balance between “opening a space to national authorities while proceeding and being seen to proceed with a commitment to act” if authorities fail to deliver.

At risk of misrepresenting the report’s conclusion, I would analogize it as follows: to be effective, the OTP must maintain the “Sword of Damocles” over domestic authorities while simultaneously stimulating them through the strategic insertion of thin acupuncture needles within complex local structures.

The HRW report begins with a list of practices that it later transforms into policy proposals.  At first glance, the recommendations seem constructive and reasonable.  Indeed, international justice would benefit from transparent international institutions that prioritize deep alliances among stakeholders and act strategically when deploying their resources.

However, when it came to the Colombian case, I found myself disagreeing with the legal and policy analysis of the report on various accounts. This difference of opinion comes as no surprise. The report assesses difficult, almost impossible, decisions made during times characterized by unrest and uncertainty: a thorny peace process was in the making. There is, therefore, much room for second-guessing as to how local authorities and the OTP have handled prosecutorial decisions in the midst of this transition.

My goal here is not to promote my analysis over that contained in HRW’s recent report.  Instead, I want to highlight additional factors that I believe deserved more attention within the report and, if taken into consideration, would likely lead to different policy conclusions.  By raising my contrasting assessment of the Colombian case, I suggest that the report’s recommendations provide important, but incomplete guidance “for strengthening the OTP’s complementary specific approaches to increase impact in the future.”

I agree with much of the report’s core analysis.  First, the OTP’s approach to the problem of complementarity has been erratic at times.  During the tenure of the ICC’s first chief Prosecutor, Luis Moreno-Ocampo, there was little indication that any coherent policy was in place.  It was practically impossible to know what the goals of the intervention in Colombia were, which made it very difficult to assess whether or not his actions matched the OTP’s intentions. Incidentally, part of the domestic human rights community in Colombia similarly criticized Fatou Bensouda’s early approach as chief Prosecutor as being no different from her predecessor.

Second, it is undeniable that the OTP has put significant effort into developing a more coherent policy toward complementarity. Through general policy documents, annual reports on countries under “preliminary examination,” and public statements, the OTP now provides a clearer picture of how it conceives its intervention and its approach to each ongoing examination and investigation. One can disagree with the method, but it is fair to say that we know there is one.

Third, much uncertainty remains. In the Colombian context, for instance, nobody knows what it would take for the preliminary examination to move forward or to be terminated. There have been positive domestic outcomes. The proceedings before the Special Jurisdiction for Peace have begun to take effect and senior military officials have acknowledged responsibility for the murders and misrepresentations known as “False Positives.” But there has also been backlash. To name but one, the Constitution was amended to include a definition of “command responsibility” that is inconsistent with international law.

And finally, there is a fourth tenet of the report that is vital to any discussion on the issue of complementarity.  They acknowledge that we must not “overstate the prospects for success…  Expectations about the OTP’s influence need to remain realistic.”  Under the current international political environment, it is clear that the OTP does not alone have sufficient leverage to “catalyze political will” in situation countries.

The Narratives on the Colombian situation

When working with multi-faceted and interrelated political processes, researchers have the complicated task of defining and interpreting “relevant” facts.  In the end, these are individual or institutional judgement calls, which later shape the knowledge base of those who consume the research.  In my opinion, some, though not all, of the decisions made by the drafters of the report are open to constructive criticism.

First of all, it is unclear why the drafters of the report made the methodological decision of detaching the “False Positives” situation from Colombia’s broader political and legal context. In any complex social context, isolating the actions of one actor (or set of actors) can be problematic, especially when the ultimate goal is accountability. The perception that international justice is arbitrarily or unfairly highlighting one of the parties to a conflict could exacerbate tensions and delegitimize justice efforts. For example, in the midst of the peace process, any indication that international justice would go after military officials before addressing the crimes of guerrillas would have prompted army hardliners to halt the negotiations.

It is further surprising to see that the report has little to say about the impact of the peace negotiations on the “False Positives” investigation. Independently of its appraisal, the peace process was a major political undertaking that profoundly impacted the fate of all conflict-related prosecutions in the country. All reform initiatives need to be understood against the political backdrop of the peace process, including the Legal Framework for Peace, the Constitutional Court’s rulings, and the expansion of military jurisdiction, among others. The report, however, unfortunately treats these efforts as independent data points without acknowledging their interconnected nature.

Moreover, by focusing only on the conviction of high-ranking military officials involved in the practice of “False Positives,” the report gives the impression that the OTP can easily opt for sequencing its intervention—first starting with one party and then later going after the next.  The OTP’s experience in African contexts, and the harsh critique that it has faced for giving this message, should be enough to show that one must approach such a view with caution.

Secondly, I want to push back against the drafters’ decision to use the lack of convictions of high-ranking officials as the primary evidence of the OTP’s supposed lack of impact.   Indeed, the limited number of high-profile convictions is one way to assess whether the OTP “has catalyzed justice in false positive killings.” But it is far from comprehensive. The report misses much by not addressing the OTP’s role in crafting the language of the peace agreement or in supporting domestic investigations of more than 2,100 cases of extrajudicial executions and the subsequent conviction of over 1,600 state agents for such acts.

Relatedly, the report assumes that the lack of convictions is principally due to a lack of governmental will to punish senior officials. Contemporary sociological methodologies tend to refrain from unidimensional explanations. For example, Payne et al. focuses on a multidimensional approach to overcoming impunity and achieving accountability, where the authors assess the strength or weakness of four main factors: civil society demand, international pressure, judicial leadership, and the absence of veto players.

Throughout the report, the drafters occasionally consider some (if not all) of these additional factors in their case analysis. However, the report lacks consistent or systematic application.  For the “False Positives” case, the report acknowledges, for example, that some influential players of the international community (influential governments) could have done more, and that the demands of civil society have provided mixed signals since.   The latter refers to the fact that, according to some domestic commentators, a more direct intervention from the OTP could have been detrimental to the peace process.  However, in the end, the report’s narrative focuses entirely on the lack of government will to support the prosecutions.

Finally, my last point of contention concerns the analysis of the OTP’s communications strategy.  The report suggests that at times the OTP has been “excessively cautious” and calls for a communications strategy “backed by the necessary expertise in the Colombian media landscape.” In contrast, research that I conducted last year with a team at Universidad Nacional de Colombia found that the most influential international voice shaping the peace accord was the OTP. For example, James Stewart, the Deputy ICC Prosecutor, delivered the keynote address in an academic conference at Universidad del Rosario, in 2015. There is a section of the peace agreement on punishment that borrows, verbatim, language from Stewart’s speech—making it perhaps the most influential academic speech in Colombia’s history! During recent times, the OTP has been very keen to use different ways to communicate with domestic stakeholders—including the Colombian Government and the Judiciary.

As mentioned, my purpose in raising these points is not to detract from the report’s narrative.  The report’s interpretation of the Colombian case is not only plausible; it is also shared by many country experts and activists in Colombia.  I am more interested in discovering ways to use the strategies proposed in the report to further facilitate this positive shift in the role of the OTP.

The four OTP strategies recommended in the report: (1)“Make more of its unique leverage to catalyze political will,” (2)“Expedite analysis to get complementarity activities earlier,” (3)“Promote strategic alliances,” and (4)“Increase transparency”—look good on paper.  The problem is that some of them (especially the first one) are so broad that they allow divergent, and even contradictory, policy interpretations.  Maybe the strategies must be broad at this stage in the OTP’s transformation process. But if that is the case, we all must be transparent and acknowledge that HRW’s analysis is partly based on informational limitations and/or policy preferences.

The report shows there is already a strong foundation to grow the capacity of the OTP.  Every intervention by the ICC Prosecutor needs a plan that is clearly communicated to domestic stakeholders and the international community. Implementation strategies should be transparent, and progress should be measured. Stakeholders will inevitably have different views of each phase of the intervention process. They may disagree with the plan or with the metrics, but those debates should inform the work and the decision-making processes of the OTP. Through this iterative process and debate, we may be able to draw comprehensive policy analysis from case-specific advocacy in any given context.

Mark Kersten is a consultant at the Wayamo Foundation, a Senior Research at the Munk School of Global Affairs, and a law student at McGill University Law School. He is also author of the book, 'Justice in Conflict - The Effects of the International Criminal Court's Interventions on Ending Wars and Building Peace' (Oxford University Press, 2016).
View all posts by Mark Kersten →
This entry was posted in Colombia, FARC, International Criminal Court (ICC), International Criminal Justice, Preliminary Examinations, The ICC’s Impact on National Justice Symposium and tagged Nelson Camilo Sanchez-Leon. Bookmark the permalink.

1 Response to From the Sword of Damocles to Acupuncture Needles – A Commentary on Pressure Point: The ICC’s Impact on National Justice