A Special Declaration: Towards a Culture of Accountability in The Gambia?

Tetevi Davi joins JiC for this post on The Gambia’s recent decision to permit individuals and NGOs direct access to the African Court on Human and Peoples’ Rights – and its implications. Tetevi is a visiting Lincoln’s Inn scholar at the European Court of Human Rights. He regularly writes on the work of the African Court and other regional courts in Africa and is a consultant for the African Foundation of International Law. 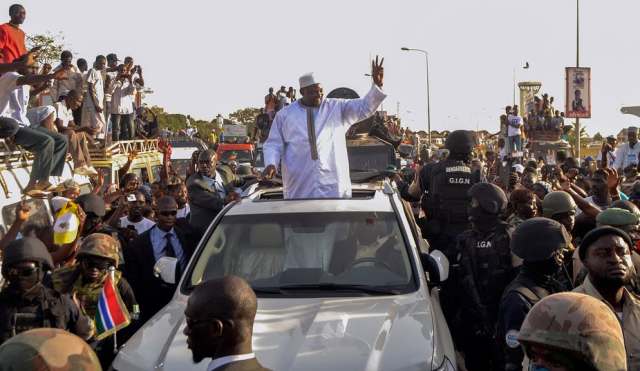 Gambia President Adama Barrow following his return to the country and his electoral victory (Photo: EPA)

On 23 October 2018, the Republic of The Gambia deposited its special declaration with the African Court on Human and Peoples’ Rights (‘the Court’). For those who may be unfamiliar with this process, in addition to ratifying the African Charter on Human and Peoples’ Rights (‘ACHPR’) and the Protocol to the Charter, states must also deposit an additional or “special” declaration with the Court in order to allow it to receive applications directly from individuals and NGOs. The African Court on Human and Peoples’ Rights is a continental court that was established by the African Union in 1998 to ensure the protection of human rights in Africa. With the deposition of its declaration, The Gambia becomes the 9th country to permit individuals and NGOs direct access to the Court, following Tunisia, which deposited its declaration in April 2017. A host of interesting implications arise from The Gambia’s deposition of its special declaration.

Growing State Engagement with the Court?

To begin with, it can be argued that The Gambia’s decision to deposit its declaration reflects an increasing willingness of African states to engage with the Court. Although the number of declarations that have been deposited is still low overall, it has recently grown at an increased pace, with 3 out of the 9 states who have deposited their declarations (Benin, Tunisia, The Gambia) having done so since 2016. Prior to this, only 6 declarations had been deposited over the span of almost 20 years. Whilst there was concern that Rwanda’s withdrawal of its 2013 declaration in the wake of the Ingabire affair  would lead to more states following suit, it appears that the reverse has been true, with three more nations depositing their declarations since then. In addition to this, the Court has been coordinating awareness-raising missions with a growing number of African states, which again is indicative of their increasing willingness to engage.

Whilst states’ improved engagement with the Court can be said to be a positive development, any optimism must be tempered by the persistent problem of the weak implementation of the Court’s judgments at the domestic level. The Court’s judgments are binding on states and its Protocol places an obligation on them to execute these judgments. Despite this, the Court’s most recent report on the status of implementation of its judgments shows that, in the majority of cases, states have either outright refused to comply with its rulings or have offered no update on the status of implementation. It is not sufficient for states to provide access to the Court for individuals and NGOs without redressing violations once they have been identified. Much more needs to be done, both by states and also by the African Union at an institutional level, to ensure that Court judgments are complied with.

Shift Towards a Culture of Accountability in The Gambia?

The Gambia’s deposition of its special declaration can also be seen as a manifestation of its desire to bring an end to the culture of impunity which existed during the 22 year rule of former President, Yahya Jammeh. Large-scale human rights abuses are reported to have been committed under the Jammeh regime including extra-judicial killings, torture, rape, and enforced disappearances. The nation’s media were also silenced through a campaign of violence and repressive laws. This repression led to a landmark judgment of the ECOWAS Court in 2015, in which it held that The Gambia’s sedition and libel laws, which had been principally used to stifle the media, were a violation of the right to freedom of expression enshrined in the African Charter, the International Covenant on Civil and Political Rights and in the Revised ECOWAS Treaty. In addition to these egregious human rights violations, it must be recalled that in 2016 The Gambia was on the verge of leaving the International Criminal Court, having notified its decision to withdraw from the Rome Statute to the Secretary-General of the United Nations. This move was interpreted by many as a flagrant attempt to shield the presidentfrom international prosecution for gross human rights abuses, as opposed to being based on any legitimate gripes with the ICC’s functioning.

Since the election of Adama Barrow on 1 December 2016, it has been reported that the human rights climate in The Gambia has improved immensely. Dozens of individuals imprisoned by the former regime, including several politicians and journalists, have been released, and the judiciary has been significantly reformed with a view to promoting independence. In October 2018, the country launched its Truth, Reconciliation and Reparations Commission, which is charged with documenting human rights violations committed from 1994 to 2017 and overseeing the award of reparations to victims, in addition to making recommendations for prosecutions. It is yet to be seen whether this Truth Commission will be effective, but this appeal to restorative justice could have a substantial impact and arguably demonstrates the government’s willingness to address the nation’s fraught past. Two additional initiatives of the Barrow government are of note: the creation of a national Human Rights Commission and Constitutional Review Commission.

Whilst many reports on the work of the Barrow government are positive, the new government also faces criticism. Of particular cause for concern has been its treatment of soldiers from the former regime, a number of whom have remained imprisoned without trial since 2017.  The Barrow government has also been criticised for having not yet amended a law which impinges on the freedom of assembly by requiring people to have a permit to attend public rallies.

Sharia Law v International Law: Another Showdown on the Horizon?

Whilst the new Barrow government officially reversed the decision taken by Jammeh in 2015 to declare The Gambia an Islamic Republic, Islam is still the dominant religion within the country and The Gambia’s Constitution provides that Shariah law governs matters of marriage, divorce and inheritance amongst members of the communities to which it applies. It must be recalled that in the recent case of APDH v Mali (which I discussed here) the Court held that domestic religious law regarding the rights of women must be disapplied to the extent that it conflicts with the rights provided for in international human rights treaties ratified by states. Like Mali, The Gambia has signed and ratified the Protocol to the African Charter on Human and Peoples’ Rights on the Rights of Women in Africa (‘Maputo Protocol’), the Convention on the Elimination of all forms of Discrimination Against Women (‘CEDAW’) and, in 2010, the Women’s Act 2010 came into force, which incorporates these treaties directly into Gambian Law. Whilst the Act seems to provide a comprehensive set of rights to women in line with those set out in these treaties, it is of note that several of its provisions, for example Article 45 dealing with the right of inheritance for sons and daughters, make such rights expressly subject to personal law, which for the vast majority of Gambians is Shariah law.  It will be interesting to see whether, now that individuals and NGOs can access the Court directly, a similar action to that in the APDH v Mali case will be brought before the Court challenging the application of this law in family matters in The Gambia.

For those who desire to see a greater level of human rights protection on the African Continent, the deposition of The Gambia’s special declaration is a welcome development. Now, not only individuals but also NGOs, with greater resources and expertise, will be able to bring claims before the Court alleging a violation of any human rights treaty that The Gambia has ratified. This is a large step towards accountability for the nation and, should The Gambia faithfully implement any potential rulings against it, it will be yet another sign that the country is ready to turn the page from an oppressive and tumultuous chapter in its history. This news is also encouraging from a broader perspective, in that it demonstrates that more nations are engaging with the Court. As always, however, greater efforts need to be made towards ensuring implementation so that any perceived progress is not merely illusory.

Mark Kersten is a consultant at the Wayamo Foundation, a Senior Researcher at the Munk School of Global Affairs, and a law student at McGill University Law School. He is also author of the book, 'Justice in Conflict - The Effects of the International Criminal Court's Interventions on Ending Wars and Building Peace' (Oxford University Press, 2016).
View all posts by Mark Kersten →
This entry was posted in African Court on Human and Peoples’ Rights, African Union (AU), Gambia, Guest Posts and tagged Tetevi Davi. Bookmark the permalink.

6 Responses to A Special Declaration: Towards a Culture of Accountability in The Gambia?