Perceptions of Justice: Continuing the Conversation on Managing Perceptions at the ICC

Patryk Labuda joins JiC again with this response to Mark Kersten and Carrie McDougall on the Prosecutor of the International Criminal Court’s meetings with ‘unsavoury’ leaders and managing perceptions of the ICC. Patryk is a Hauser Global Fellow at New York University. His article kicking off this conversation can be found here. 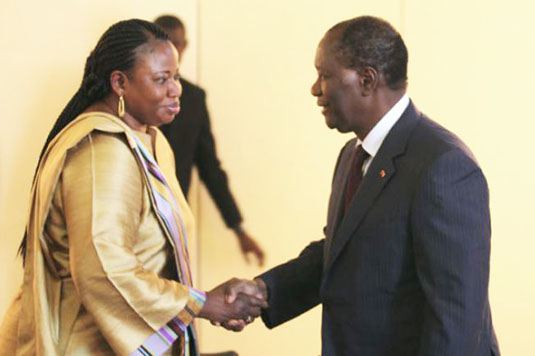 I want to thank Mark Kersten and Carrie McDougall for their thoughtful responses to my post on the ICC’s meetings with ‘unsavory’ leaders. I’ll begin by underscoring that I agree with much of what Mark and Carrie say in their posts. Both make compelling points about the need to engage leaders with questionable human rights records, while drawing attention to several issues that received insufficient attention in my original post. Many people on Twitter have also weighed in (see here, here and here), adding nuance to this debate.

In this post, I would like to address three themes emerging from the various responses: how much transparency is necessary, whose perceptions matter, and where to draw the line between the good, the bad and the ugly. I hope my response will add clarity to any remaining points of disagreement, while fostering a more informed debate on what, admittedly, is likely to remain a divisive topic.

The first point that bears emphasizing is the symbiotic yet fraught relationship between the act of convening such meetings and the subsequent release of information (including images) about those meetings. I initially saw these two issues as distinct, but the longer I thought about it the more I realized that dissociating the image from the meeting is not quite so simple. In other words, the image may be the whole point of the meeting, and I think Carrie’s post does a good job of highlighting the resulting tension.

Indeed, these meetings may in some cases be less about the substance and more about the photo op. In that sense, while I sympathize with Mark’s plea for more transparency, I tend to think, per Carrie, that diplomacy often requires secrecy. I am not sure there is anything wrong with diplomatic confidentiality per se(and I include ICC diplomacy under that rubric), although I agree that we should be attuned to the risks that Mark identifies in his post, in particular: what does the ICC do if photos are leaked in bad faith? I am not sure one can craft a solution to all these dilemmas, but I do think we need to give more thought to the relationship between meetings and images. This brings me to the next question.

It is clear that meetings between high-ranking ICC staff and governmental leaders can serve desirable ends. In addition to cooperation or universal membership, the ICC can try to improve its difficult relationship with the African Union (AU) and build support for its work among African states. Carrie praises the Prosecutor for leveraging her status as a Gambian to correct misconceptions about the ICC in Africa, while underscoring that Bensouda was only doing what the ASP had asked her to do. Intriguingly, Carrie also suggests that Bensouda was encouraging “African leaders to give more thought to African victims, rather than focusing on alleged African perpetrators.” On Twitter, Stephen Lamony echoes this argument, noting that I and others may simply be making assumptions about what victims want.

I find this critique unpersuasive. Admittedly, I have not carried out surveys of victims to ask whether they appreciate photos of ICC staff smiling with their alleged tormentors. Maybe it is true that, in some cases, victims perform a hard-nosed cost-benefit analysis and end up embracing a realpolitik vision of the ICC, where the Prosecutor and other Court principals have no choice but to engage with dictators to advance the overall cause of justice.

But it is certainly odd to hear these consequentialist justifications based on rationalist cost-benefit theories of ICC behavior from victims’ advocates and people who often argue that the ICC is above politics. Suddenly, the ICC must do politics because engaging dictators is for the “greater good”? In Carrie’s words:

The Prosecutor has been a vocal and ardent public proponent of accountability and almost always puts victims first in her public messaging.  Why would anyone see the photo of her and Kagame and assume that the meeting was about anything other than encouraging Rwanda to support the international criminal justice project in some shape or form?

Not only is the burden of proof reversed in claims implying that everything the ICC touches necessarily advances victims rights, I would go further and argue that Carrie’s overall argument unwittingly answers the underlying question about whose perceptions really matter: the primary audience for ICC meetings with ‘bad leaders’ is the international community. In justifying meetings with the likes of Kagame as a form of rapprochement with the AU, the reality is that we are privileging perceptions of the ICC among African and world elites. While I agree that the ICC performs a cost-benefit analysis of such meetings, those who assume that improved perceptions of the ICC among elites result in a better overall climate for the Court’s work, and that this in turn benefits victims, bear the primary burden of proving that convoluted and consequentialist claim about causality—not the other way around.

Drawing Lines between the Good, the Bad and the Ugly

The most compelling critique of a non-essential contacts policy for the ICC is that drawing lines between good, bad and ugly leaders is simply unfeasible. I agree that this is a real dilemma, but a few observations are in order. It is worth emphasizing that most everyone will intuitively agree that there is such a thing as an unnecessary photo. Reactions to my initial blog post have varied, but Mark correctly points out that Luis Moreno-Ocampo’s infamous London photo with Museveni was “an unambiguously bad idea.” Likewise, I think very few today would approve of the Prosecutor posing for a smiling photo with Bashar Al-Assad of Syria. Maybe some would try to justify holding such a meeting in absolute secrecy, but surely a smiling photo is too much for even the most unwaveringICC supporter?

This brings us back to the photos that triggered this conversation. Mark argues that “[t]he Prosecutor and her team surely make some form of cost-benefit analysis prior to accepting or convening these meetings…” and that they are “certainly aware of the allegations facing these leaders…”. I am not sure this is quite so simple. I think the very different reactions to my original post highlight that twenty years from now someone like Al-Assad could potentially pose for photos with an ICC Prosecutor, and many people would no longer remember why this is so utterly unacceptable.

The point is not to compare Al-Assad to Kabila, nor is this the place to dissect Kagame’s human rights record. But we must bear in mind that people like Kagame make it something of a personal mission to whitewash their troubled pasts. Would it ever be ok for Al-Assad to pose for such photos if twenty years from now Syria is a reasonably well-functioning state? I fear human memory is too short, and it is our duty as human rights activists and scholars to remind people why some things are shocking in the first place.

The point is that there is a difference between Bensouda meeting Kagame or Kabila on one hand, and her smiling for a photo with Muhammadu Buhari, the Nigerian President, on the other. Although formally they occupy similar positions, these people are not in the same risk category. Carrie is critical of the non-essential contacts policy, but I think we need to focus less on the analogy with indictees and more on how a policy (or whatever we call it) can mitigate some of the risk associated with meetings of this nature. Here, I would reiterate that there is a real difference between secret meetings and a photo for all to see. Maybe an official policy would make it easier for the ICC to decline photos in certain circumstances, and thereby ease the diplomatic awkwardness of doing so? Another interesting idea floated on Twitter was to designate other ICC principals, for instance the Registrar, to represent the Court in particularly fraught meetings. Maybe photos with the Registrar would cause less reputational damage to the ICC?

I do not know the answers to these and other dilemmas. The reality is that there may not always be a straightforward answer. I think it also worth acknowledging, per Mark, that the ICC has become much better at managing perceptions in the past few years. That said, we should not assume that the ICC has mastered this art (last week’s video of Prosecutor Bensoudabuying into the deeply troubling rhetoric of ‘false news’ seems to underscore this point). These are inherently difficult questions and there is value in dialogue. If nothing else, I hope theseposts will have started a conversation within ICC circles, even if that conversation remains confidential and we never get a full blown non-essential contacts policy.

1 Response to Perceptions of Justice: Continuing the Conversation on Managing Perceptions at the ICC