Sri Lanka and the Best Transitional Justice Joke Ever? 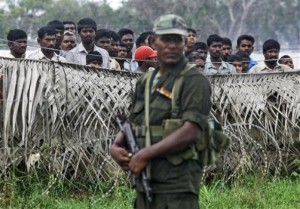 There remains significant doubts amongst the international community as well as Sri Lankas about the prospects of justice (Photo:www.eelanatham.info)

The final stages of the Sri Lankan civil war were particularly brutal. It has been repeatedly alleged that both the Sri Lankan government forces and the Liberation Tigers of Tamil Eelam (LTTE) committed war crimes. The International Crisis Group (ICG) concluded that:

“Although both sides committed atrocities throughout the many years of conflict, the scale and nature of violations particularly worsened from January 2009 to the government’s declaration of victory in May. Evidence gathered by the International Crisis Group suggests that these months saw tens of thousands of Tamil civilian men, women, children and the elderly killed, countless more wounded, and hundreds of thousands deprived of adequate food and medical care, resulting in more deaths.”

Following their declaration of victory, and under significant pressure from the international community, the government of Sri Lanka established the Lessons Learnt and Reconciliation Commission (LLRC), to investigate potential crimes committed between 2002 and 2009 as well as to promote reconciliation. Given previous failed and ineffective efforts to reckon with past atrocities, skepticism towards the truth commission has been palpable even before the Commission started its work. Some also expressed doubt that a government which so handily declared victory could investigate its own potential violations effectively. Robert Templer, the Asia programme director for the ICG maintained that “[t]here is no reason to believe this is any more serious than the previous commissions set up by this government that have simply perpetuated a culture of impunity.” Another observer wondered whether the LLRC “would prop-up national myths, cover up the responsibility of those in power and legitimize a repressive regime.”

War crimes were allegedly committed by both sides during the Sri Lankan Civil War (Photo: http://www.uktamilnews.com)

International actors were also skeptical. Wikileaks cables reportedly show that despite the view that “[r]esponsibility for many of the alleged crimes rests with the country’s senior civilian and military leadership, including [Sri Lankan] President Rajapakse,” US officials retain serious doubts that Sri Lanka will hold anyone accountable for violations of human rights during the war.

The LLRC has already encountered problems in practice as well. Numerous human rights groups, including the ICG, Amnesty International and Human Rights Watch, refused to participate in the Commission, calling it flawed and lacking in independence. They argue that the mandate of the LLRC is too restrictive and the Commission is susceptible to government interference. Frustration and skepticism amongst the international community has also been fueled by Sri Lanka’s resistance to allowing international involvement in the process. Further, media coverage has been hampered. In some instances, the BBC has been denied access to cover the Commission’s hearings.

It remains uncertain how effective the LLRC can be. Theories of Transitional Justice would suggest a less than hopeful outcome. Many Transitional Justice commentators argue that questions of justice are “easily” dealt with when one side of a conflict wins a total victory. When a war ends in the total victory by one party, the question of justice often becomes “victor’s justice”. Justice is imposed by the victors on the losers of war. The classic case is that of post-WWII Imperial Japan and Nazi Germany. In the name of humanity, the Allies, as victors of the war, imposed justice upon the Japanese and German leaders. Never before had individuals been tried in front of international tribunals for crimes against humanity and war crimes. By and large, the crimes didn’t even exist! The extent to which justice was pursued depended on the political will and interest of the Allied states. It remains an uncomfortable truth for advocates of international criminal justice that accountability in both Japan and Germany may very well have been victor’s justice and was certainly very selective.

The LLRC in action. Many doubt it can mete anything more than victor's justice (Photo: http://www.srilankaguardian.org/2010/11/catholic-community-appeals-for.html)

The situation in Sri Lanka approximates a scenario of total victory. It appears that, despite international pressure, most believe that any justice the commission metes will be little more than victor’s justice. The logic is compelling – if key leaders of the current government are responsible for war crimes, then it would be a remote possibility that they would allow an investigation that points the finger of criminal responsibility directly at them. Who would sentence themselves to prison?

Sri Lankans have heard the story before. Commissions of inquiry have been set up before by the government yet no members of the security forces have been effectively investigated. Sri Lankans are not just doubtful but largely pessimistic about the promise of justice in the country. Indeed, one Sri Lankan scholar told me that there’s virtually no pressure from inside Sri Lanka for transitional justice; people simply do not view it as a political possibility.

Often times tragedy is dealt with humour. Perhaps there’s something cathartic about it. This brings me to perhaps the best Transitional Justice joke I have heard. Alluding to the numerous failed attempts to achieve justice in Sri Lanka, Sri Lankans describe truth commissions as such:

Mark Kersten is a consultant at the Wayamo Foundation, a Senior Researcher at the Munk School of Global Affairs, and a law student at McGill University Law School. He is also author of the book, 'Justice in Conflict - The Effects of the International Criminal Court's Interventions on Ending Wars and Building Peace' (Oxford University Press, 2016).
View all posts by Mark Kersten →
This entry was posted in Asia, Humour, Sri Lanka, Truth and Reconciliation Commissions. Bookmark the permalink.

5 Responses to Sri Lanka and the Best Transitional Justice Joke Ever?