Did the UN Security Council Just Outsource Peace in Libya to the ICC?

Libyan President Gaddafi may very well come under investigation of the ICC (Photo: Globe and Mail)

Is it possible that the UN Security Council referral of the situation in Libya to ICC was an act of outsourcing responsibility for peace?

In the peace-justice debate, some critics of the ICC go so far as to argue that the Court is responsible for peace. These claims unnecessarily muddle a prescient debate. There are no doubt important claims that need examining, including whether the inclusion of judicial processes has helped or hindered peace processes to end conflicts. Yet, these critics misunderstand the role justice can play in conflict situations. It may be, however, that many critics are simply reacting to the rhetoric of the Court’s staunchest proponents who declare that “there is no peace without justice.”

Proponents of the ICC often presume that the Court is God’s gift to peace. Expectations often get out of hand. There are limits to what law can – and indeed should – do. As Rachel Kerr and Eirin Mobekk argue, trials “need to be carefully assessed in light of what the tribunals can do, rather than what some have argued they should do.” Expecting that the ICC or any tribunal can be responsible for both peace and justice may simply be unrealistic. It is obvious that the proponents of the ICC are very excited about the prospects of investigating crimes in Libya. They have a right to be so. I agree with Kevin Jon Heller at Opinio Juris who writes: “the referral seems a wholly appropriate response to the unconscionable violence perpetrated by Gaddafi and his henchmen against Libya’s civilian population.” But expectations about what the ICC can do need to be tempered. It is important to remember that the ICC has not yet decided that it will open an official investigation into events in Libya (see a post by Heller on this subject here)

Whatever the debate, the ICC isn’t the UN Security Council. It isn’t responsible for peace and security.

While many side with the view that no international institution is, or possibly can be, beyond the pale of politics, the ICC clearly views its judicial work as apolitical. In a 2007 policy paper, Luis Moreno-Ocampo, the Court’s Chief Prosecutor wrote that “there is a difference between the concepts of the interests of justice and the interests of peace and…[the] matter of international peace and security is not the responsibility of the Prosecutor; it falls within the mandate of other institutions.”

This is not to defend the Court but rather to understand its place in the constellation of institutions involved in conflicts. In this context, it remains problematic to apportion blame or praise for the success or failure of peace in Darfur – or anywhere – on the ICC. Doing so presumes that the Court is a fundamentally political institution responsible for peace. In the case of Darfur, despite declaring that it would “remain seized of the matter,” it appears that the UN Security Council, in referring Darfur to the ICC, placed the burden of responsibility for peace on the Court.

Could this happen again with Libya?

There are a few key differences. Most importantly, perhaps, this recent referral to the ICC comes at a time when Libya is in a state of domestic chaos. News coverage depicts a state that is failing and imploding with the grace of a bull in a china shop. Sudan, on the other hand, was, to a large extent at least, politically stable in 2005 when the UN referred the situation. Not surprisingly, indicted Sudanese President al-Bashir remains in power while it seems unthinkable that Libyan President Gaddafi will be able to hold onto power, or his life for that matter, much longer. Importantly, the Council Resolution regarding Libya also included provisions imposing an arms embargo, freezing Libyan assets and banning the travel of Gaddafi, his family members and close aides. 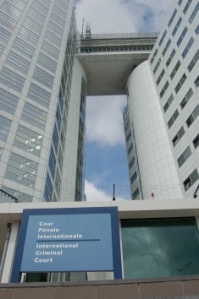 There is an institutional division of labour when it comes to peace and justice (Photo: Mark Kersten)

Elsewhere, others have debated whether there should be a military intervention under a rubric of the Responsibility to Protect or ‘R2P’. I won’t add my thoughts here. But if some greater demonstration of force or commitment is deemed necessary in Libya to protect the population, then responsibility for peace must lay directly at the feet of the Security Council, not the Court. If it is otherwise, we will hear the same allegations as were voiced in the Balkans, with the International Tribunal for the Former Yugoslavia attempting to achieve “through law what the international community was not prepared to achieve through force.” (Simon Chesterman)

Mark Kersten is a consultant at the Wayamo Foundation, a Senior Researcher at the Munk School of Global Affairs, and a law student at McGill University Law School. He is also author of the book, 'Justice in Conflict - The Effects of the International Criminal Court's Interventions on Ending Wars and Building Peace' (Oxford University Press, 2016).
View all posts by Mark Kersten →
This entry was posted in Balkans, International Criminal Court (ICC), Libya, Sudan, UN Security Council. Bookmark the permalink.

5 Responses to Did the UN Security Council Just Outsource Peace in Libya to the ICC?