China, the ICC and Libya: A New Level of Hypocrisy? 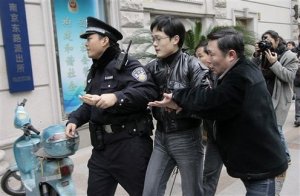 Chinese authorities have cracked down on protests inspired by the 'Jasmine Revolution' (Photo: Reuters)

Perhaps the most surprising element of UN Security Council Resolution 1970 (2011), which referred the situation in Libya to the ICC, was that it was supported unanimously. There is chatter on the blogosphere wondering where the African Union, which in recent months had vociferously derided the ICC for its arrest warrant against Sudanese President Omar al-Bashir, stands. But what about China? After all is it not somewhat shocking that China, ever protective of its domestic status quo, voted in support of the Council’s Resolution?

Let’s take a look at the relationship between the ICC and China.

During the Court’s lifetime, China’s relationship with the ICC has shifted between prickly and productive. China, of course, is not a member state and it was one of only four states to vote against the Rome Statute in 1998. China has had significant disagreements with the Court over various issues, including the definitions of crimes under its mandate, the role of the UN Security Council, the powers of the Court’s Prosecutor, as well as its jurisdiction. Many of its dissenting views have been reconciled with the notable exception of its fear that the Court could become a political tool. In this context, China has been a vehement supporter of deferring the arrest warrant of Sudanese President Omar al-Bashir and has actively stifled attempts by the Security Council to pressure Khartoum over crimes committed in Darfur.  It is worth noting that in the case of UN Security Council Resolution 1593, which referred the situation in Darfur to the ICC, China abstained, allowing the vote to pass, but without any overt expression of support for it.

Despite these contentious issues, not everything about Chinese-ICC relations has been doom-and-gloom. China participated actively in the negotiations leading up to the adoption of the ICC’s Rome Statute and has been an engaged partner in the ICC’s Assembly of States Parties since 2002. Not only has it been engaged with the Court, but it has, on occasion, voiced impressive political support for the Court. While this may come as a surprise to many, China has even suggested that its accession to member-state status is a realistic possibility. It wouldn’t be absurd to argue that, in fact, China’s relationship with the ICC has historically been much more engaged and positive than that of the US. In 2002, when the Rome Statute came into force and the Bush administration, eager to prove its opposition to the Court, ‘unsigned’ the Rome Statute, China declared that:

“If the operation of the court could bring to justice all those individuals who have perpetrated most serious international crimes, this would not only help build confidence in international justice, but will also ultimately contribute to the maintenance of international peace and security. This is the outcome we fervently hope for.”

China voted in favour of the Resolution to refer the situation in Libya to the ICC (Photo: Zimbio.com)

Interestingly, China thus reaffirms the view that the Court plays a role in the constellation of institutions that contribute to international peace and security.

A year later, China again voiced its political support for the Court as well as its desire to actively work to ensure its success, at the Sixth Committee of the General Assembly:

“What we hope to see is that before long, an independent and just international judicial body that truly commands respect will emerge to play an important and positive role on the international stage. China is ready to work tirelessly with other countries towards this end.”

This brings us to the Council’s referral of the situation in Libya to the ICC. Fearing that it would set a precedent, China was the only country which initially rejected the ICC referral entirely. While it shifted its position after the Libyan envoy to the UN wrote a letter to the Council, only after consulting with Beijing did the Chinese delegation finally decide to vote in support of the referral.

“China was very much concerned about the situation in Libya.  The greatest urgency was to cease the violence, to end the bloodshed and civilian casualties, and to resolve the crisis through peaceful means, such as dialogue.  The safety and interest of the foreign nationals in Libya must be assured.  Taking into account the special circumstances in Libya, the Chinese delegation had voted in favour of the resolution.”

While there is no mention of human rights, the third line of the Resolution reads that Security Council,

“…Deploring the gross and systematic violation of human rights, including the repression of peaceful demonstrators, expressing deep concern at the deaths of civilians, and rejecting unequivocally the incitement to hostility and violence against the civilian population made from the highest level of the Libyan government…”

Of course, in this context, China’s position against the “repression of peaceful demonstrators” may seem hypocritical. Just last week China cracked down on peaceful protesters in China following calls to stage a Chinese ‘Jasmine Revolution‘, the pro-democratic movements sweeping across the Arab world and elsewhere. Activists and rights lawyers have been detained and arrested. Chinese authorities have also cracked down on internet activity that they fear might fuel a movement against the government.

So, will the real China please stand up? On the one hand, China cracks down on domestic protests and detains human rights advocates inspired by events in countries like Libya. As the Washington Post described it, China is “cracking down to prevent Mideast-style protests.” On the other hand, China actively engages with, and indeed supports, the ICC as well as a Resolution on the human rights of Libyans and their right to peacefully demonstrate. Some commentators have argued that this illustrates China’s “new direction” in international relations. On the face of it, at least, it just looks like a domestic-international conflict of policies.

Can China keep this up? There may be far-reaching consequences for the country. Chinese dissidents and human rights advocates now have more fuel for their arsenal against Chinese repression of human rights. They can point directly at the Chinese-approved Resolution 1970, Chinese engagement on issues of justice and human rights, as well as Chinese implicit approval of a right to demonstrate peacefully. Whether they will do so, remains to be seen. Of course, as the Chinese government has shown, they will not hesitate to crack down on protests nor control the flow of information about democratic movements elsewhere.

Mark Kersten is a consultant at the Wayamo Foundation, a Senior Researcher at the Munk School of Global Affairs, and a law student at McGill University Law School. He is also author of the book, 'Justice in Conflict - The Effects of the International Criminal Court's Interventions on Ending Wars and Building Peace' (Oxford University Press, 2016).
View all posts by Mark Kersten →
This entry was posted in China, Human Rights, International Criminal Court (ICC), Libya, Sudan, UN Security Council. Bookmark the permalink.

1 Response to China, the ICC and Libya: A New Level of Hypocrisy?