Missing the Mark: The ICC on its Relationship with the UN Security Council

Last week, for the first time since the International Criminal Court (ICC) was established, the United Nations Security Council debated its relationship with the Court. After two Security Council referrals (Darfur 2005 and Libya 2011), it was high time that the relationship was critically analyzed. Unfortunately, key issues which have undermined the independence and legitimacy of the ICC were left largely unaddressed.

There are many problematic issues with regards to the relationship between the ICC and the UN Security Council. Broadly, most fall under three categories: the potential tensions and dilemmas between peace-making/conflict resolution and international criminal justice; the inevitable selectivity that only some situations of mass atrocity will be referred by the Council to the ICC while other cases, which are just as deserving, will not; and the political constraints imposed by the Security Council on the ICC when it decides to refer a case to the Court.

The first problem is considered in the so-called “peace versus justice” debate. Included  is the issue of political will amongst Security Council states to back-up referrals with effective support. As readers will know, this blog is, to a large extent, dedicated to the relationship between international criminal justice on conflict resolution. With regards to selectivity of cases, it is my view that it is largely out of the control of the ICC but it is also compounded by the selectivity entrenched within the political constraints imposed on the ICC within Security Council referrals. As a result, this post focuses on the ICC’s seeming unwillingness to confront the Council’s political tailoring of referrals.

In a draft academic article on this subject, I argue that the language of the Security Council’s referral of Libya to the ICC is likely to undermine the Court’s independence, impartiality and, thus, its legitimacy. I focus in particular on three issues. First, Resolution 1970 includes a reference to Article 16 which allows the Security Council to stop the ICC’s investigations and prosecutions for 12 months (renewable yearly). Second, the referral explicitly excludes the ICC from investigating or prosecuting any citizens of states which are not members of the ICC. Third, Resolution 1970 stipulates that the Court can only investigate crimes after 15 February 2011.

All of these issues, for various reasons (see here), amount to the Council tailoring the ICC’s mandate to its political whims. Others are also concerned. At a recent conference, Christian Wenaweser, the former President of the ICC’s Assembly of States Parties, stated that there was “pretty much everything wrong” with the language inResolution 1970.

Much of the political wording of Resolution 1970 is simply copied and pasted from Security Council Resolution 1543, which referred Darfur to the ICC. One might also add that, in both the Libya and Darfur case, the Council has refused to provide any funding for the Court’s work and has subsequently provided little-to-nothing in diplomatic and political support.

It should thus come as no surprise that after two referrals, the political manipulation of the ICC by the Council isn’t exactly a secret. For example, Human Rights Watch touched directly on the question of political vocabulary and language, declaring that

“The two Security Council referrals to the ICC, Resolutions 1593 and 1970, have included provisions that are damaging to the court, Human Rights Watch said. Both referrals imposed the entire financial burden of the new investigations and prosecutions on the court and its member countries. They also allowed exemptions for the nationals of non-member third countries should they be implicated in serious crimes committed in the referred country.”

In this context, one might expect that the ICC to be eager to confront the Security Council about the language the Council has deployed in its referrals and request it to refrain from using such vocabulary in the future. Unfortunately, that was not the case.

Neither the Office of the Prosecutor (OTP) nor the President of the ICC commented on this question. The OTP danced around the edges of the issue, stating in its speech to the Council that:

It is important to underscore the need to respect the Office of the Prosecutor’s independence at all times. Once the Security Council decides to refer a situation to the Prosecutor, the judicial process has been triggered and the matter is fully in the hands of the Prosecutor and the Judges. The only way to stop the procedure is one of legal means, by invoking Article 16 of the Rome Statute. Efforts to interfere with the independent exercise of the Office’s mandate would only serve to undermine the legitimacy and credibility of the judicial process, thus giving credence to allegations of politicization.

Still, the OTP made no reference to the language of either Resolution 1970 or 1543. 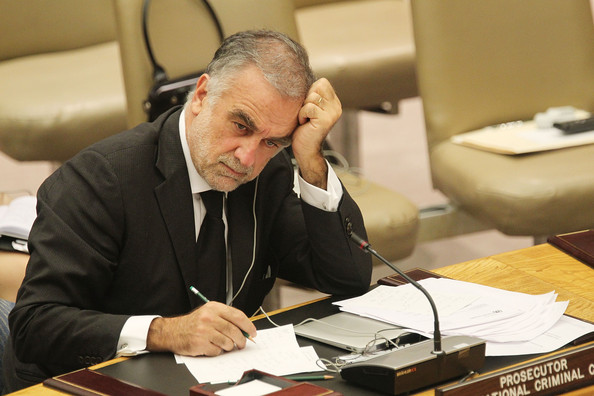 ICC President Judge Sang-Hyun Song also largely steered clear of the issue, although he did discuss the question of cooperation and financing investigations put in motion by the Council:

For the ICC to effectively deal with situations referred by the Council under Chapter VII, it needs to be able to count on the full and continuing cooperation of all UN members, whether they are parties to the Rome Statute or not. This includes not only cooperation in investigations and the gathering of evidence, but also in areas such as the execution of arrest warrants and tracing the assets of suspects. In making any future referrals, it would be very helpful if the Security Council could underline this obligation of full cooperation, without which it is very difficult for the ICC to discharge the mandate the Council has given it.

An area of concern for many ICC States Parties has been the financial implications of these referrals. This complex issue is principally for UN members to consider. Clearly it will be difficult to sustain a system under which a referral is made by the Security Council on behalf of the UN, but the costs of any investigation and trial proceedings are met exclusively by the parties to the Rome Statute.

Undoubtedly, these were important and timely remarks. But it remains curious that neither organ of the Court decided to voice its concern with that which, in many respects, has the greatest potential to undermine the ICC’s judicial independence and legitimacy, namely the political constraints applied by the Council to the Court’s mandate. In particular, it is troubling that the question of the ICC being instructed that it cannot investigate citizens of non-state parties was virtually ignored.

While deeply problematic, the bright side of the Darfur and Libyan referrals is that they are opportunities for the ICC to learn and improve. But such learning requires a willingness to critically assess past practices and not externalize blame. The fact remains that the ICC and many of its proponents readily accepted – and in some cases even celebrated – the Darfur and Libyan referrals. Perhaps there was something to celebrate, but certainly not everything and certainly not the highly politicized language within in Resolutions 1543 and 1970.

Of course, it is important to remember that the ICC is a relatively young institution. We cannot discount that a lot of what it does, it does for the first time. There are bound to be tough times and difficult lessons for the Court. But Libya was the second UN Security Council referral and there is something to be said about the old adage: “Fool me once, shame on you. Fool me twice, shame on me.” In the case of accepting the political tailoring of the Security Council, being a novel institution is no longer a sufficient excuse.

Mark Kersten is a consultant at the Wayamo Foundation, a Senior Researcher at the Munk School of Global Affairs, and a law student at McGill University Law School. He is also author of the book, 'Justice in Conflict - The Effects of the International Criminal Court's Interventions on Ending Wars and Building Peace' (Oxford University Press, 2016).
View all posts by Mark Kersten →
This entry was posted in Darfur, ICC Prosecutor, International Criminal Court (ICC), Libya, Libya and the ICC, Sudan, UN Security Council. Bookmark the permalink.

7 Responses to Missing the Mark: The ICC on its Relationship with the UN Security Council