When an Alleged War Criminal Walks into a US Embassy and says: ‘Take me to the ICC’

An ICC indictee walks into an American Embassy in broad daylight and asks to be transferred to The Hague. This could be the beginning of a good joke. But it isn’t. It is exactly what happened in Rwanda yesterday.

The world is abuzz with news that notorious rebel leader Bosco Ntaganda, wanted by the ICC on allegations, amongst other things, that he conscripted, enlisted and used child soldiers in the Democratic Republic of Congo (DRC), surrendered himself to the US Embassy in the Rwandan capital of Kigali. According to Victoria Nuland, spokesperson of the US Department of State,

[T]his morning Bosco Ntaganda, an ICC indictee and leader of one of the M23 factions walked into U.S. Embassy Kigali. He specifically asked to be transferred to the ICC in The Hague. We’re currently consulting with a number of governments, including the Rwandan government, in order to facilitate his request… I don’t think that we had any advance notice that he would plan to walk in. It sounds like it was something that happened this morning, and we are endeavoring to meet his request… We want to facilitate that request. As you know, we strongly support the work that the ICC is doing to investigate the atrocities committed in the Democratic Republic of the Congo, and we are going to continue to work with the ICC in this matter.

The question on everyone’s mind is: what convinced Ntaganda to give himself up? Unfortunately, despite rampant speculation on the subject, the truth is, we simply don’t know.

Here is what we do know: First, the M23, a rebel group in which Ntaganda had been a key leader, splintered recently and was hunting Ntaganda down. Second, there were rumours that Ntaganda would “sold out as part of any peace deal” in the DRC. Third, “The Terminator”, who is a very recognizable figure and has long been supported by the Rwandan government, managed not only to get into Rwanda but get all the way to Kigali and present himself at the US embassy. Fourth, despite not being a member-state of the ICC (and therefore having no obligations to the Court), the US will facilitate his transfer to The Hague. Fifth, at least publicly, neither the DRC nor Rwanda have a problem with him heading to the ICC. 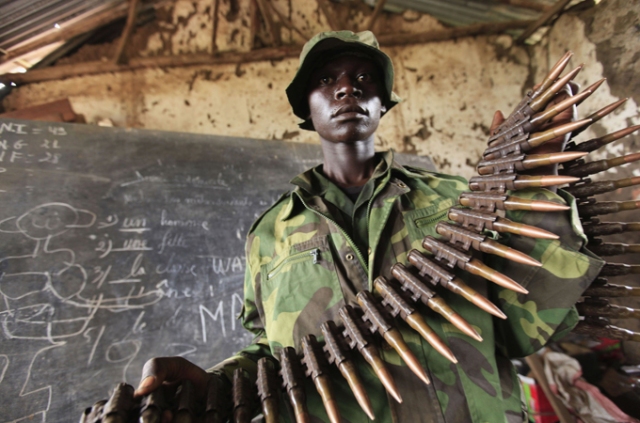 With Ntaganda’s surrender, Rwanda, in particular, is in a tricky position. It is quite clear that Ntaganda could ‘spill the beans’ on his closer and precarious relationship with Kigali. Given how much is already known about Rwandan support for the M23 and other rebel groups in the Eastern DRC, we probably wouldn’t learn much. But it would undoubtedly infuriate and embarrass the regime of Paul Kagame, which has gone to borderline absurd lengths to deny its relationship to Ntaganda as well as its role in fuelling conflict in the DRC over the last two decades. In short, Rwanda is unlikely to be particularly happy that Ntaganda is headed to The Hague for a lengthy trial. But it is precisely because of its close relationship with The Terminator that the government is likely to take a hands-off approach and claim that they are more than happy to see Ntaganda sent to The Hague. Any other course of action would immediately betray their position that they have had no relationship with him.

As for the ICC, it is understandably and unsurprisingly thrilled that Ntaganda will be surrendered to the Court. The rebel leader had been ‘hiding in plain sight’ for years, living a very public life in Goma, much to the chagrin of human rights and international justice advocates. After a very tough week, the ICC undoubtedly welcomed the news that a notorious criminal and source of deep embarrassment would soon be in its custody.

But there is another reason for the ICC to be excited: Ntaganda’s looming transfer represents the most significant act of cooperation between the United States and the Court in the ICC’s history. It wasn’t that long ago that the relationship between the US and the ICC was fractious (to say the least), with the Bush administration doing everything it could to undermine and isolate the Court. The idea of the US transferring indictees to The Hague would have been laughable then. Today, it’s no joke; it is soon to be a reality.

Still, it remains to be seen when and how the US will actually transfer Ntaganda to the Court. And it might not be anytime soon. According to Reuters, a US embassy official has said that “I don’t think we have any real idea of when things will happen. We are still figuring out how it’s going to work.”

Importantly, even when Ntaganda is transferred, his conviction is anything but guaranteed. It was only a few months ago that DRC rebel leader Matthieu Ngudjolo was acquitted at the ICC. Moreover, the Prosecution had tremendous difficulties (and made serious gaffes) in its case against another DRC rebel, Thomas Lubanga. He eventually received a 14-year sentence on charges not dissimilar to many of those Ntaganda faces. The Prosecution has its work cut out for it.

Many questions remain to be answered. The circumstances around Ntaganda’s surrender are anything but clear. But it was still a very good day for the ICC and, above all, for the victims of Ntaganda’s crimes.

Mark Kersten is a consultant at the Wayamo Foundation, a Senior Researcher at the Munk School of Global Affairs, and a law student at McGill University Law School. He is also author of the book, 'Justice in Conflict - The Effects of the International Criminal Court's Interventions on Ending Wars and Building Peace' (Oxford University Press, 2016).
View all posts by Mark Kersten →
This entry was posted in Democratic Republic of Congo, ICC Prosecutor, International Criminal Court (ICC), Rwanda, United States and tagged Bosco Ntaganda, M23. Bookmark the permalink.

16 Responses to When an Alleged War Criminal Walks into a US Embassy and says: ‘Take me to the ICC’