Barrier to Justice: Could Rwanda Prevent Ntaganda from Reaching The Hague? 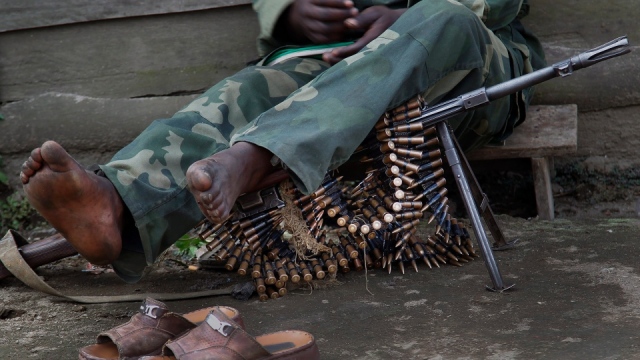 Troubling signs have emerged that the transfer of Bosco Ntaganda to the International Criminal Court (ICC) may be “inhibited” by the Rwandan government. On Monday, Ntaganda stunned the world when he surrendered himself to the ICC via the US Embassy in Kigali, Rwanda.

The US government, which has stated that it is keen to transfer Ntaganda to the ICC as quickly as possible, is concerned that Rwanda will frustrate its efforts. According to Melanie Gouby and Mike Corder,

The United States government appears to be worried that Rwanda won’t allow a warlord from Congo now camped out in the U.S. Embassy safe passage to the airport to be flown to the International Criminal Court for prosecution.

The U.S. hopes Rwanda will help facilitate the transfer of Congolese rebel leader Bosco Ntaganda from the U.S. Embassy in Kigali to the airport for a flight to the ICC in the Netherlands, the top U.S. State Department official on Africa, Johnnie Carson, said Wednesday.

“We hope that the Rwandan government will do its part,” Carson said in a telephone press conference from Washington. “It is a small but significant part to ensure that Bosco Ntaganda is able to move freely from the American embassy compound to the airport where he will board a plane and go to The Hague.”

Carson said it’s important that Ntaganda’s movement from the embassy to the airport “in no way be inhibited.”

Carson also indicated that Rwanda hasn’t yet assured cooperation with ICC officials en route to Rwanda. He noted that Rwanda, like the United States, is not a signatory to the Rome Statue that created the ICC and is not bound by international obligations to hand Ntaganda to the ICC.

The possibility of Rwanda seeking to undermine Ntaganda’s transfer shouldn’t come as a surprise. For the moment at least, Ntaganda’s surrender means that everyone comes out a winner – except for the Rwandan government.

The American decision to help Ntaganda get to the ICC is a public and international relations victory for the country; in this case at least, the US appears firmly on the side of international justice. As far as the ICC is concerned, it will now have custody over a long sought-after rebel and can celebrate a very significant act of cooperation with the US. The Democratic Republic of Congo (DRC) is now rid of a potential obstacle which may help it progress in its fragile peace process with rebels in the country’s Eastern provinces, including the M23. As far as Ntaganda is concerned, it is increasingly clear that his personal and physical safety was in jeopardy prior to his surrender. US State Department spokesperson Victoria Nuland stated yesterday that Ntaganda has sought “sanctuary” at the ICC. The former rebel is likely relieved to be in the protective custody of the US Embassy. Most importantly, communities in the Eastern DRC no longer have to fear “The Terminator”. As one resident of Goma, where Ntaganda had hidden in plain sight for years, put it: “The war in Congo concerns every tribe; it doesn’t matter if you are Lendu, Hema, Tutsi or Hutu. Everyone is happy he has surrendered.”

As I argued in my post yesterday, however, Rwanda is in a precarious situation. The government of Paul Kagame supported and supplied Ntaganda and the M23. The government is surely anything but keen to see its relationship to rebels in the Eastern DRC further examined and exposed in The Hague.

At the same time, it would be misguided for Rwanda to directly prevent Ntaganda’s transfer to The Hague. Nothing would so obviously betray their relationship to him. As I argued yesterday, Rwanda was (and would be) wise to take a hands-off approach towards Ntaganda’s transfer in order not to appear to be actively interested in his predicament and thus undermine their case that they have nothing to do with him. However, Rwanda may seek to inhibit Ntaganda’s transfer indirectly. Precisely what that would mean is unclear at the moment. But what we do know is that the potential for Rwanda to scuttle US efforts to transfer Ntaganda’s transfer is real and the Americans are sufficiently concerned to come out and say so publicly.

When, how and, indeed, if Ntaganda actually gets to the ICC remains to be seen. But only when he finally arrives in The Hague will this saga end. When he does, of course, a new saga will begin.

Mark Kersten is a consultant at the Wayamo Foundation, a Senior Researcher at the Munk School of Global Affairs, and a law student at McGill University Law School. He is also author of the book, 'Justice in Conflict - The Effects of the International Criminal Court's Interventions on Ending Wars and Building Peace' (Oxford University Press, 2016).
View all posts by Mark Kersten →
This entry was posted in Democratic Republic of Congo, International Criminal Court (ICC), Rwanda and tagged Bosco Ntaganda. Bookmark the permalink.

5 Responses to Barrier to Justice: Could Rwanda Prevent Ntaganda from Reaching The Hague?