The ICC to the Rescue… Kind of, Maybe. 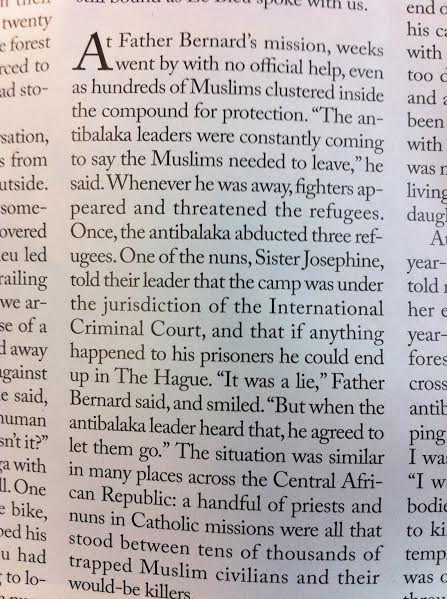 I received the above snippet from a friend (and friend of the blog) and wanted to share it with readers. It appeared in a recent New Yorker article entitled “The Preist, the Killers, and a Looming Genocide” which covers how civilians are coping with ongoing violence and instability in the Central African Republic.

For observers, practitioners and scholars of international criminal justice, it is a fascinating anecdote for a number of reasons. First, it is a small but notable piece of evidence that individuals mired in the context of political violence view the International Criminal Court (ICC) as a tool with which they can leverage their security and safety. Second, and just as notably, it suggests that even those individuals who use the ICC as a means to prevent violence or atrocities don’t actually believe it is particularly effective (i.e. “It was a lie” that the antibalaka leader would ever end up in The Hague).

Such anecdotal evidence has important implications for the study of the ICC’s ability to deter crimes and atrocities. If this anecdote is true, then the ICC has been usefully used by people who do not believe in its power to deter potential perpetrators of atrocities from doing so.

In recent years, the study of deterrence has stagnated quite a bit, in large part because of a broad consensus that it is virtually impossible to research the subject and demonstrate that a potential perpetrator did not commit an atrocity as a direct result of potential sanction from the ICC. Notably, however, fantastic forthcoming scholarship by researchers such as Michael Broache and David Mendeloff has begun to reinvigorate deterrence literature. Identifying, analyzing and assessing deep, empirical examples like the one cited in the New Yorker article may hold the promise of reviving a relatively stagnant domain of international criminal justice.

Mark Kersten is a consultant at the Wayamo Foundation, a Senior Researcher at the Munk School of Global Affairs, and a law student at McGill University Law School. He is also author of the book, 'Justice in Conflict - The Effects of the International Criminal Court's Interventions on Ending Wars and Building Peace' (Oxford University Press, 2016).
View all posts by Mark Kersten →
This entry was posted in Central African Republic (CAR), International Criminal Court (ICC). Bookmark the permalink.

6 Responses to The ICC to the Rescue… Kind of, Maybe.