Thijs B. Bouwknegt joins JiC for this first-hand account and analysis of the decision by Judges at the International Criminal Court (ICC) to uphold the verdict against Thomas Lubanga Dyilo. Thijs is a legal historian and researcher at the NIOD Institute for War, Holocaust and Genocide Studies in Amsterdam.

“All rise, the International Criminal Court is now in session. Please be seated.” Thomas Lubanga Dyilo, dressed in a light blue dashiki, put on his headphones, wringed his hands, blinked his eyes, kicked back, sat up again and then rested his head into his hands. He was nervous. Final judgement day had arrived. Finally. Over two and a half years after he was convicted for three war crimes, the International Criminal Court’s Appeals Chamber convened on a cold Monday afternoon to rule on the appeals of the former Congolese politician-styled warlord. His trial was flawed and unfair, he argues. It runs contrary to the Prosecution’s appeal. They wanted his “manifestly disproportionate” 14-year sentence raised, without explicating with how much.

It was an historic day for international justice. This was the first time the ICC signed off an appeals judgement. But interest has waned, as if the world has forgotten about Lubanga and the endemic conflicts in the east of the Democratic Republic of the Congo (DRC). Empty seats remained in the public gallery, not even half of it to be filled with court staff, a handful of devoted journalists and a single NGO observer. Lubanga himself did not invite his family for the occasion, like most other defendants would do on this type of day. Also shining in absence were his victims. The only Congolese present represent the diplomatic corps. “Is this justice seen to be done?” asked a journalist. “Come on, it is appeals,” replies another. On Twitter, trial observer Iva Vukusic, was “wondering what victims get from listening to judgements. Unless you follow the trials regularly, this stuff is incomprehensible.”

And indeed, 3179 days after Lubanga was brought to The Hague, the trial that dealt with child soldiers in the mass violence that plagued the Congolese Ituri region in the early 2000s, ends with an anti-climax: a sober, legalistic and collegial review of the trial chamber’s first ever verdict and sentence. Flanked by four colleagues, Judge Erkki Kourala monotonously read out a summary of the 193-paged appeals judgement and 50-paged sentencing judgement. They took a distanced view; they would not assess the evidence again, but would “only intervene if the Trial Chamber’s findings were unreasonable.” Then, after the chamber dismissed Lubanga’s request to consider three new pieces of evidence, the former UPC leader overheard the rulings on his seven grounds of appeal, alleging abuse of his fair trial rights, a prejudiced Prosecutor and the lack of clear facts underlying his prosecution.

Point-by-point, Kourala listed how Lubanga had not substantiated or sufficiently argued his complaints, only to rule that the trial chamber had not acted beyond the limits of its discretion and that its findings were “not unreasonable.” All grounds of appeals were rejected, including those of the Prosecution, and the verdict and sentence rubber-stamped. But only by majority. Judge Sang-Hyun Song, only disagreed “partly” with his colleagues, on a legal note. According to the ICC’s President, Lubanga should have been convicted and sentenced for one crime of child soldiering and not separately for three ways of committing it [conscripting, enlisting and using children]. Only the Latvian judge dissented from the majority on fundamental grounds.

If it was up to Judge Anita Ušacka, Lubanga should not have been convicted at all. “In my view, the evidence relied upon by the trial chamber to convict Lubanga was not sufficient to reach the threshold of beyond any reasonable doubt,” she explained. “In practice they have applied a lower standard,” because, according to Ušacka, “the trial chamber was motivated more by the desire to create a record of events, rather than to determine the guilt of [the] individual to the standard applicable in criminal proceedings.” On that note, she expressed her hope “that future prosecutions of these crimes at the Court will adduce direct and more convincing evidence and preserve the fairness of proceedings, which lies at the heart of criminal prosecutions and should not be sacrificed in favour of putting historical events on the record.” 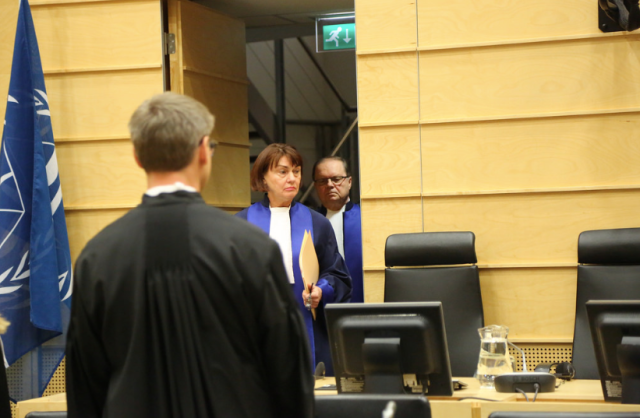 Ušacka’s dissent was a sharp indictment against the court’s fact-ascertainment dilemmas. She highlighted two well-known deficiencies in this case: insufficiently detailed charges and the absence of the requisite element of crimes. Regarding the indictment, she said it was mainly based on testimony of nine alleged child soldiers – whose testimony was found to be erratic – but that the “remainder of the allegations regarding a pattern of crime did not contain reference to a single identified victim, while the dates and locations were framed in unacceptably broad terms.” For five years, Lubanga had “no meaningful opportunity to challenge the evidence at trial” which was based on these nine individual cases, “yet he was ultimately convinced of the unspecific charges of a pattern of crime.” This approach has broader implications warned Ušacka, as “ultimately, even the factual conclusions of the Trial Chamber suffered from the same level of imprecision.”

On a similar level, Judge Ušacka, considered “that the evidence in this case was, in particular, not sufficient to establish that at least some of children in the UPC/FPLC were under age of fifteen.” She lamented the Trial Chamber’s cautious approach, saying that “estimating the age of individual based solely on his or her physical appearance is very complex and prone to error, even when scientific methods are used.” During trial, she explained, the three judges relied on age estimates given by lay witnesses, who often offered no explanations as to how they knew the age of children. Regarding video evidence, the Trial Chamber simply “found that the images spoke for themselves” while according to Ušacka, the children “are frequently only partly visible and their sizes are unclear in the absence of any objective comparator.”

She reminded the court of an trial-featured evidentiary video excerpt of a boy playing with an insect, which in her view was “by far the strongest in terms of quality of the lighting, the clarity of the image and the close range of relevant individual.” But after the March 2012 judgement, Lubanga’s defence team had located the boy and called him to testify during the appeals hearings in May this year where he indicated “he was aged between 19 and 20 years at time that the video was filmed.” Another similar defence witness also testified, “that he was between the age of seventeen and eighteen” when filmed.

In Ušacka’s view “in light of the overall weakness of the evidence establishing that some children were under the age of fifteen, the submitted additional evidence in relation to Witnesses D-0040 and D-0041 clearly has the potential to demonstrate that the approach of the Trial Chamber was flawed and thereby have an impact on conviction.” She therefore strongly disagreed with the majority of the Appeals Chamber who dismissed the additional evidence only by saying “Lubanga could have presented this evidence at trial and is therefore not persuaded by his arguments as to why he failed to do so.”

It is no secret that the first trial at the ICC was marred by trials and errors. Based on a minimalistic, delegated and selective enquiry, it was stayed two times and faced considerable evidentiary challenges. These issues were extensively detailed in the trial judgement, narrating the prosecution’s negligence in parts of its investigation. Still, Lubanga received a very narrow conviction, not on the accounts of his alleged victims and neither because he had “meant to” conscript, enlist and use boys and girls in his militia but because, he “was aware that, in the ordinary course of events, this would occur.” This feeble record is now definite, as the majority of an appeals chamber who deemed it “not unreasonable” endorsed it. Ušacka’s dissent, however, will soon become a footnote in the ICC’s trial record. Yet, it leaves a rather dubious stain on the “beyond any reasonable doubt” standard applied in international criminal trials: one doubtful judge in a panel of five seems not to be reasonable enough to question the veracity of the evidence leading to convictions.

3 Responses to (Un)Reasonable Dissent? The Lubanga Trial Comes to Close