Stephen Lamony joins JiC for this timely piece refocusing debates on Sudanese President Omar al-Bashir’s travels in defiance of the International Criminal Court to its impact on victims. Stephen is Head of Advocacy and Policy, UN, AU and Africa Situations and Sina Alavi, Bridge Fellow at the Coalition for the ICC. 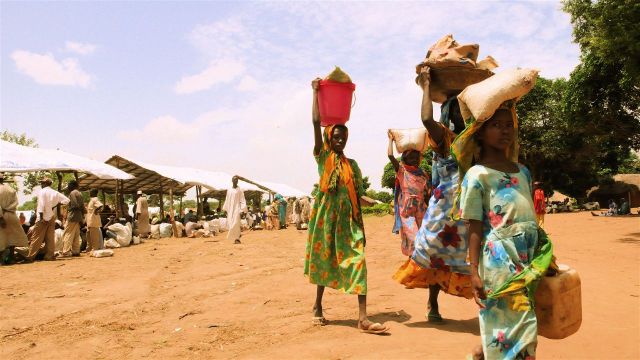 The New York Times recently published a video Op-Ed by Nicholas Kristof and Adam B. Ellick on ‘The Worst Atrocity You’ve Never Heard Of’. Kristof and Ellick sneaked into the Nuba Mountain region of Sudan to document the crimes against humanity being carried out by the Sudanese president, Omar al-Bashir. The images Kristof and Ellick captured were horrific. But they also act as a glaring reminder of the grave consequences of al-Bashir’s evasion of arrest, not only in terms of justice served for past crimes, but also with regard to the continued torment of certain pockets of the Sudanese population. Omar al-Bashir’s fugitive status is more than just a political or legal issue, it is an affront to all the victims that have suffered, continue to suffer, and will suffer from his brutal reign over Sudan.

Last Month, al-Bashir visited South Africa, a State Party to the International Criminal Court, to attend a meeting of the African Union. During his visit, the South African courts ordered that al-Bashir be barred from leaving the country until a decision was made regarding South Africa’s obligations vis-à-vis the ICC arrest warrant against him. Omar al-Bashir managed to flee South Africa shortly after the court’s announcement. The events surrounding his departure are still under investigation.

In the media aftermath of al-Bashir’s visit and hastened departure from South Africa, talk of victims often came after, if at all, a discussion of the international legal nuances and political implications of his dodging arrest. While it is certainly necessary to debate those issues, too little attention has been given to why this matter is important in the first place, namely the need for an end to mass atrocities in Sudan and victims’ rights to justice. As one victim of the conflict in Darfur explained to Niemat Ahmadi of the Darfur Women Action Group,

I have lost many family members to al-Bashir’s genocidal regime and was forced to flee my home to save my own life. As a victim of al-Bashir’s brutal crimes, I am appalled and deeply disappointed in President Zuma. To me, his conscious choice to aid al-Bashir in evading justice for the world’s most heinous crime makes him as guilty as al-Bashir. It not only shows Zuma’s complicity in supporting genocide and endangering thousands of indigenous Africans in Darfur, but it has put into question his ability and desire to protect his own South African people whose struggle is no different than that of the people of Darfur.

Despite such testimonies, the victims of the genocide in Darfur are still waiting for justice, and South Africa’s failure to detain al-Bashir on its territory represented yet another disappointment in that regard.

The topic of victims was, however, brought up during the Parliamentary debate held in Pretoria, South Africa on 23 June 2015. Notwithstanding a criticism of the International Criminal Court (ICC) and its strong focus on the African continent, Bantu Holomisa, a United Democratic Movement Member of Parliament, said that his party “stood firmly with the victims of human rights atrocities, and called on South Africa to clarify its foreign policy ‘unambiguously’”. The Democratic Alliance also stated that the South African government had failed the people of Darfur: “Let us, for a moment, think about what allowing Mr. al-Bashir to evade the laws means to the 300,000 people who were murdered and the two and a half million people who were displaced in Darfur,” said Mr. Mokgalapa. He also accused the government of taking the “moral low-ground.

When the United Nations debated the situation in Sudan on 29 June 2015, in the presence of the ICC Prosecutor Fatou Bensouda, many of the permanent members and 10 members of the Security Council brought up the issue of victims. The representative of the United States, in the final words of his statement, said that the Council and the international community too often lose sight of the victims in this conflict: “It is the victims that make the need for accountability acute”. The representative of the United Kingdom made a similar statement, identifying the strong need for the International Criminal Court to ensure justice for the victims of the conflict. The representative of France also strongly stated that civilians continue to be the primary victims of the conflict in Darfur. The plight of the victims of the ongoing violence was also present throughout the Prosecutor’s speech to the Security Council.

In contrast, the African Union’s Assembly of the Union held in both January and June 2015 failed to bring up in any great detail the essential issue of victims. The Assembly of the Union held in January and June saw an expression of support for the victims of terrorist attacks. The June Assembly of the Union covered the case of victims under the umbrella of migration. Despite those instances, an analysis of the AU Assembly’s decisions dating back to 2008 show very little discussion of victims. Even its most recent ‘Decision on the Update of the Commission on the Implementation of Previous Decisions on the International Criminal Court’ from June 2015 failed to make any mention of justice for African victims. As one commentator familiar with the AU noted,

I am deeply hurt and overwhelmingly dismayed by the African Union’s betrayal of the African people in Darfur. By mobilizing all of its financial, intellectual, and political resources behind al-Bashir, an international fugitive wanted by the ICC for genocide, war crimes, and crimes against humanity, the African Union has clearly violated its own principles and disqualified itself from being a protector of human rights in Africa. This act to me is not about opposing the ICC anymore, the fact of the matter is, it’s a coalition of African governments that has instead declared a shameful battle against the suffering African victims who have long being murdered in Darfur who mistakenly assumed that the African Union would one day protect them.

In the wake of al-Bashir’s escape from South Africa, several questions remain unanswered. For one, many African victims find it difficult to understand why the African National Congress, South Africa’s governing political party, would defend a man who has appeared to assume responsibility for the bloodshed in Sudan by proclaiming: “how will God answer our prayers when we are shedding the blood of Muslims and each other’s blood…how can we ask for mercy when our hands are covered in blood?” Moreover, al-Bashir was prevented from becoming the AU Chairman in 2006 by African leaders due to the atrocity crimes accusations against him. Most importantly, how will South Africa and the AU assure the people of Darfur that justice will be served when al-Bashir is shielded from arrest by South African leaders and the AU continues to actively undermine the work of the ICC in Africa?

It remains to be seen if South Africa will approach the ICC to settle its disputes directly or seek an advisory opinion from the International Court of Justice (ICJ) on the question of al-Bashir’s immunities. If it chooses the latter option, then South Africa will finally act on a long standing AU decision which was made in January 2012, where the AU Assembly asked the AU Commission to seek an advisory opinion from the ICJ on immunities of state officials under international law.

South Africa and the African Union’s neglect of the issue of justice for victims of mass atrocities on their continent is inexcusable. The AU has unashamedly decided to put its weight behind fighting the ICC’s influence. To do this, the AU has gone so far as to call on African countries to withdraw from the Rome Statute of the ICC. Moreover, it remains unclear whether South African officials were deliberately deferring to the AU stance on the ICC by allowing al-Bashir to leave the country. In the end, what is clear is that South Africa failed to respect its obligations to the ICC as well as its own judicial branch of government. More importantly, the ANC, South Africa and the African Union have all failed the victims of mass atrocities in Sudan and elsewhere in Africa.

3 Responses to Putting Victims First: The Aftermath of al-Bashir’s Visit to South Africa