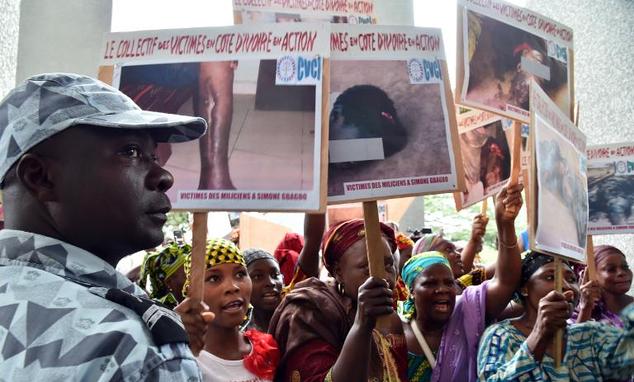 Families of victims of the 2011 violence gather outside of the courtroom in Abidjan where Simone Gbagbo was on trial last year (Photo: Daily Mail)

A former first lady went on trial for disturbing the peace and undermining state security in Abidjan. She was convicted and given a twenty year sentence. The International Criminal Court (ICC) and human rights groups, however, insist should still be prosecuted in The Hague for the crimes that she has been charged with by the Court. In response, lawyers in Côte d’Ivoire charge Simone Gbagbo with crimes against humanity during the 2011 post-election violence — the same charges she’s facing at the ICC. Looks good, right? Not quite. As she goes on trial, groups representing Simone Gbagbo’s alleged victims say they’ll take no part in the proceedings and pull out because “the prosecution’s investigation had been rushed in order to respond to the ICC warrant and the trial would not give victims a full picture of the Gbagbo administration’s orchestration of the post-election violence”.

Let’s take a step back for a moment. In recent years, there has been something of a ‘complementarity turn’, a subtle but evident shift towards focusing on “positive complementarity” — the ICC’s role and ability to catalyse domestic prosecutions. Rather than seeing perpetrators of international crimes find themselves in the dock in The Hague, galvanising domestic proceedings is increasingly seen as the ICC’s primary means of ending global impunity. It relies, of course, on using carrots and sticks to ensure that states meet the Court’s complementarity regime — i.e. investigating and prosecuting perpetrators of war crimes, crimes against humanity and genocide, and showing that they are able and willing to do so genuinely. In the case of Côte d’Ivoire, we have a state that has responded positively to the ICC’s insistence that an alleged perpetrator be prosecuted with the same crimes she faces at the Court. But the groups representing the victims think it was done with such haste that they’ve pulled out of the proceedings altogether. What’s going on here? Were the victims groups right to ditch proceedings?

One would assume that the victims groups, including the International Federation for Human Rights, don’t make unilateral decisions for their victims but instead represent their wishes through a consultative process. Withdrawing from proceedings is undoubtedly a dramatic act. After all, it is unlikely that Simone Gbagbo will be prosecuted elsewhere and perhaps ever again for international crimes. Her current and ongoing trial may be the only chance these victims get to participate in a trial and have their voices heard by Gbagbo herself. Evidently, however, their expectations of proceedings are so low that they would prefer not to see justice done rather than to lend the legitimacy of their participation to the hearings.

This raises a broader question: how quickly should states respond to ICC pressure to investigate and prosecute alleged perpetrators of international crimes? This isn’t an easy question to answer, particularly in cases where there have been instances of mass political violence or war — i.e., essentially all ICC cases. In such instances, surely new governments shouldn’t simply be expected to immediately ‘flip’ their most senior and often responsible detainees over to the ICC. If there is any virtue in the idea of new regimes prosecuting old ones in order to break with the past, sending senior perpetrators to The Hague would undermine it. In Libya, ICC prosecutors and judges gave the authorities a remarkably long leash when it came to prosecuting former spy chief Abdullah al-Senussi. As I explore at length elsewhere, this was at least in part because Court officials felt that the new Libyan government deserved a crack at prosecuting senior figures from the Gaddafi era.

But there is also the risk that states can’t or won’t genuinely prosecute former despots, dictators, or their ilk. This is not always because they don’t want to but because of the circumstances, including violent unrest and political instability. In the Senussi case, the ICC’s leash was, in fact, far too long. The Court essentially gave its blessing to a deeply flawed, nigh impossible, trial. For whatever reason, prosecutors refuse to acknowledge this or to suggest that perhaps, given the incredibly volatile situation in the country, the admissibility hearings should be re-started and Senussi should be transferred to The Hague for trial.

Finally, there is the issue of outsourcing — where a state chooses to simply and (almost) immediately flip its detainees to the ICC in order to get rid of them and ensure that they are no near their former bases of power. Fearing that Laurent Gbagbo’s presence could potentially destabilise Côte d’Ivoire, this is precisely what the government of Alassane Ouattara did in the case of the country’s former president. Such outsourcing is permissible under the Rome Statute of the ICC, but remains a rather controversial and particularly political practice.

Deciding how fast or slow complementarity in practice should work will always be negotiated context-specifically. But it also needs more theorising and study. So too do strategies that the ICC can employ. For example, instead of insisting that Simone Gbagbo be surrendered to The Hague, perhaps the Court and its proponents should have focused their energy on ensuring that proceedings met the expectations of victims.

Echoing Darryl Robinson’s cogent observations on the choices and quandaries in international criminal justice, when it comes to timing and complementarity, there is no Goldilocks principle. There is no happy medium where everything is ‘just right’. But it is possible to identify when things seem ‘just wrong’. In Libya, that is the Senussi case and the ICC’s ambivalence towards where his flawed ‘trial’ in Libya. In Côte d’Ivoire, what could be a clearer signal that something has gone terribly wrong with complementarity in practice than when victims, in whose name international criminal justice is pursued, decide to step aside?

A version of this article was first posted for my bi-monthly column at Justice Hub.

Mark Kersten is a consultant at the Wayamo Foundation, a Senior Researcher at the Munk School of Global Affairs, and a law student at McGill University Law School. He is also author of the book, 'Justice in Conflict - The Effects of the International Criminal Court's Interventions on Ending Wars and Building Peace' (Oxford University Press, 2016).
View all posts by Mark Kersten →
This entry was posted in Complementarity, International Criminal Court (ICC), Ivory Coast / Côte d'Ivoire, Libya, Libya and the ICC, Simone Gbagbo and tagged Abdullah al-Senussi. Bookmark the permalink.