The ‘Fallen’ Miss Venezuela – The Sexualisation of the Venezuelan Tragedy

The following is a guest-post by Noemí Pérez Vásquez, an independent human rights law consultant and PhD Candidate at SOAS, University of London. This blogpost and Noemí Pérez Vásquez’s attendance to the Siracusa Institute 19th Specialization Course in International Criminal Law for Young Penalists was supported by the Canadian Partnership for International Justice and the Social Sciences and Humanities Research Council of Canada. The article can also be found in Spanish, here. 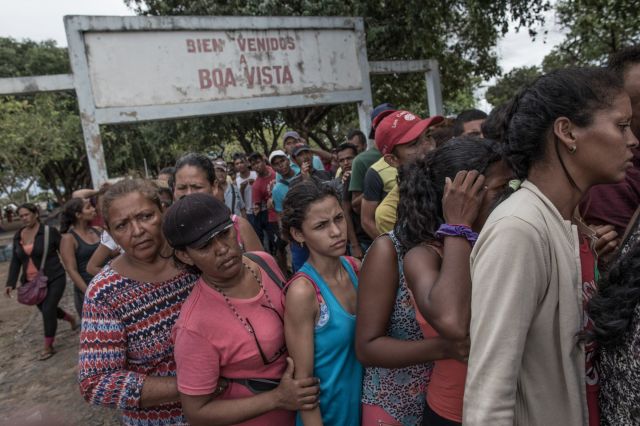 One of my childhood memories is being in a playground and playing Miss Venezuela. It was no small thing. We grew up taking pride in our origins, a country where the large range of mixed races contributed to our ‘mestizaje’ and the Miss Venezuela, a night when families would get together to support the representative of their local region, was at the centre of this narrative. Only after several years did I realise not only the self-inflicted damage that this wrought upon our national psyche, but that other countries would also have this image of ourselves as the country of beauty pageants. What we did not know, was that in times of crisis, this was to become a double-edged sword.

Due to a political, economic and humanitarian crisis, Venezuelans are fleeing and leaving everything behind to reach safety. According to the UN Refugee Agency, as the number of refugees and migrants from Venezuela tops 4 million, this has become the largest migratory flow in the history of the American region and after Syria it is currently the second largest in the world. Recently, it was announced that while for the first-time applications of asylum seekers in the European Union from Syria were down 8% from 2018 to 20,392, Venezuelans also came as the second largest nationality represented, with 14,257 citizens. While a government accused of committing gross violations by the UN High Commissioner for Human Rights is in denial, Venezuelans are living a daily nightmare without seeing a light at the end of the tunnel.

Last month, the Organization of the American States (OAS) released a report according to which Venezuelan migrants and refugees could reach between 5.3 and 5.7 million by the end of 2019, and between 7.5 and 8.2 million by the end of 2020. That would mean that with a former population of 30 million, the expectation is that around 30% of them will be gone by next year. While Venezuelans are desperately trying to leave the country and hoping to send money for food and medicines back to their beloved ones, the whole situation has become a breeding ground for trafficking, sexual slavery, child exploitation, forced prostitution and survival sex of Venezuelan women and girls.

The sexualisation of this tragedy is widespread. Starting with the Dominican Republic, where Venezuelan women have arrived to work as sex workers. I was told by a friend working in this sector that because many Dominican men prefer to hire the services of the Venezuelan women due to the novelty and their appearance, this has altered local dynamics and generated rivalry among local sex workers. In Mexico, the aspiring model Kenny Finol, who ended up working as an escort, was brutally tortured and murdered by a drug dealer and hitman. Last year, the Colombian police detained in Cartagena a Navy Captain accused of pimping, prostitution and trafficking more than 250 girls and adolescents, mainly from Venezuela. While the ring was comprised of foreigners and Colombians, including members of the state security apparatus, the Captain dared to order the minors to have a tattoo bearing his name, a trait indicative of ownership and thus sexual slavery.

Something similar is happening in Trinidad and Tobago, where the police have detained corrupt police officers with ties to gangs, money laundering and human trafficking – Venezuelan girls being their preferred targets. Moreover, because the Venezuelan government decided to close the borders, there are accounts of women being sexually and physically abused when they attempt to cross irregular paths and of sex workers being returned by Colombian immigration officers aware that they could be raped upon their return. But the tentacles of trafficking also extend outside the Americas region. In Spain, the police continue to uncover trafficking rings that bring and force Venezuelan women and transgender persons to engage in prostitution. The list of cases that are surfacing seems endless. From stories of women being forced to pay their rents in Colombia through sex, to a pejorative rap song in Panama, to underwear that read ‘to your service, I am your Veneca’ in Peru, our dignity has been stripped away.

The sexual and reproductive rights of different and overlapping categories of migrant women and girls have been greatly affected. In bordering towns located in Colombia and Brazil, due to the high number of Venezuelans, including many women who have fallen into forced prostitution and survival sex, xenophobia is at its peak. In Cucuta, for instance, there are allegations that around 80% of the sex workers are Venezuelans. Many of them are in fact minors, who can charge as little as USD 1 for sex – a little bit higher without the use of condoms. As a result of their stigmatisation, in some of these towns they may be denied medical care and assistance. The same may happen with some pregnant Venezuelans, who have been denied pre-natal care, vaccines and medicines, despite a favorable decision of the Colombian Supreme Court and the recommendations of the UN Committee on the Elimination of Discrimination against Women (CEDAW) concerning the protection of migrant women.

We then have a situation where not only are Venezuelan women and girls obtaining sexually transmitted diseases and undesirable pregnancies, but some of those who are pregnant have their right to life put under serious risk. To make the situation more complicated, according to the UNHCR, thousands of babies of Venezuelan mothers who have been born in Colombia are in a situation of statelessness. Unlike Venezuela, Colombia does not automatically grant citizenship to children born in the country, which means that a child must have at least one parent who is Colombian in order to obtain citizenship. By being stateless, these babies are in legal limbo and their right to an identity is denied. This will not only impact their access to education and healthcare, but it will also interfere in human activities from getting married and travelling to opening a bank account and renting a home. In an article recently written by a former CNN anchor titled ‘Stop giving birth’, she calls for the Colombian state to control the birth rate of Venezuelans. Is wearing a visible mark next?

Hannah Arendt would argue that the problem of our current conception of human rights is that they are connected to the nation-state rather than humanity itself. Because many of these women never worked in the sex industry before, there are accounts of them falling into depression after seeing themselves in a situation that they never could have imagined. We can think not only about the physical impact, but also the psychological damage that they are experiencing. They need the protection of the states where they are, but also, Venezuelans need to understand that many of these women and girls are surviving and trying to help those back home. I was in Bogota last year, and I met three men from my hometown Maracaibo selling candies in the Plaza Bolívar. They told me that a couple of blocks away, there was a street full of naked Venezuelan women offering their sexual services. They could not understand why they had fallen so low. But as Virginia Woolf says, if Shakespeare had a sister, she would probably have killed herself.

The reality is that for women, everything is more difficult and in a situation of vulnerability, we are more exposed to people taking advantage of us. This, together with the old and widely-known narrative of local beauties as an exportation product, has fueled the problem and facilitated the violations committed against the rights of our girls and women. And the danger also seems to have permeated all spheres in our society: a human rights defender in Venezuela told me how his female students enrolled in an elite university keep receiving tempting and suspicious offers to travel and work in foreign countries.

It is only a matter of time before a transitional justice programme is implemented in Venezuela. When that times comes, we will need to be ready to receive our women and their children and to focus on their rehabilitation and protection of their economic and social rights, particularly health and education, as well as to overcome any possibility of stigmatisation through their stories of resistance. In the meantime, we need stronger engagement by the international community and that the Latin American states act in concert towards the Venezuelan migration crisis and its feminisation.

The UNHCR recently stated that while under certain cases the 1951 Refugee Convention is applicable, the majority of Venezuelans are in need of international refugee protection, based on the wider criteria of the 1984 Cartagena Declaration that applies in Latin America. According to this instrument, refugees may be those who have fled their country because their lives, security or freedom have been threatened by circumstances that have seriously disturbed the public order. Moreover, not only are girls and women in urgent need of protection from non-state actors involved in trafficking, child exploitation and sexual slavery, but also, based on gender grounds, they should be granted refugee status due to the fear and persecution attached to these crimes.

As Patricia Viseur Sellers argues, we need to stop thinking about sexual slavery as if it were different from enslavement. How much then are we missing an international criminal court that attends to transnational crime! Effective border controls by state actors should also be accompanied by the application of the principle of non-refoulement, guaranteed under international human rights, refugee, humanitarian and customary law and characterised by its absolute nature without any exception.

Finally, the rights of refugee and migrant women and girls, particularly those of a sexual and reproductive nature, should be fulfilled. If the polis, rather than territorial circumscriptions, is the public space where people speak and act together, there cannot be peace if we don’t accept that communities are in a constant flux and recognise that others should be treated as equal human beings.

Mark Kersten is a consultant at the Wayamo Foundation, a Senior Researcher at the Munk School of Global Affairs, and a law student at McGill University Law School. He is also author of the book, 'Justice in Conflict - The Effects of the International Criminal Court's Interventions on Ending Wars and Building Peace' (Oxford University Press, 2016).
View all posts by Mark Kersten →
This entry was posted in Guest Posts, Latin America, Migration, Sexual and Gender Based Violence, Sexual Violence, Venezuela and tagged Noemí Pérez Vásquez. Bookmark the permalink.