Nigeria: the International Criminal Court’s Next Challenge in Africa?

Daniel Eyre joins Justice in Conflict for this guest-post on the International Criminal Court and the challenges of prosecuting alleged crimes committed by government forces in Nigeria. Daniel is a human rights consultant and formerly the Nigeria Researcher at Amnesty International. 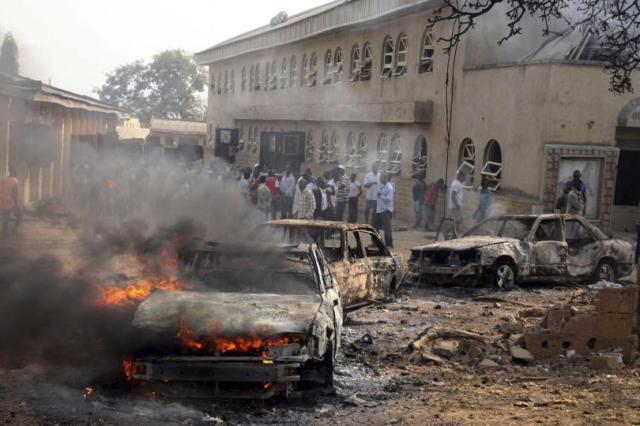 On 14 March 2014, Nigerian soldiers reportedly executed more than 640 unarmed men and boys in Maiduguri city. At 7am that day, Boko Haram fighters launched a daring attack on Giwa barracks, a military base on the city’s outskirts, where soldiers had detained more than 1,000 people. Outnumbered, the soldiers retreated. The assailants broke into the cells and took their members back to the group’s rural hideouts. Hundreds of other detainees were left to walk the streets of Maiduguri, begging residents for the necessities they had been denied in military detention: food, water and clean clothing.

After an hour or so, the army returned. Soldiers arrested the escaped detainees and assembled them in several locations around Maiduguri. Unarmed and posing no threat to person or property, the re-arrested men and boys were murdered. In most cases, soldiers shot the detainees. One particularly disturbing video – taken by the military – shows soldiers restraining detainees in front of a pit and cutting their throats.

Next month will mark the third anniversary of these killings. Despite compelling evidence, no-one has been held accountable for these war crimes. This incident sheds light on an under-reported pattern in Nigeria’s fight against Boko Haram. Security forces have committed serious violations of humanitarian law throughout the conflict. These crimes have not been investigated and their perpetrators remain unpunished. War crimes and crimes against humanity committed by Nigeria – a party to the Rome Statute – fall within the International Criminal Court’s (ICC’s) jurisdiction. The ICC Prosecutor has opened a preliminary examination into atrocities committed by both sides, but is rightly waiting to see whether Nigeria will begin domestic investigations. In this context, could the ICC’s involvement galvanize Nigerian politicians to hold their own accountable?

The evidence is mixed. A bill intended to punish perpetrators of war crimes and crimes against humanity continues to be debated. During his first week in office, Nigeria’s President Buhari pledged to investigate the military’s crimes. However, in the 18 months that have elapsed since that promise was made, the government has provided no information on how or when these investigations will be conducted. In the absence of genuine national proceedings, the ICC Prosecutor must decide whether to open her own investigations. At a time when the African Union has backed a “strategy for collective withdrawal” from the Rome Statute, the Prosecutor will be loath to open investigations into one of the ICC’s most reliable supporters. Yet anyone hoping that the Prosecutor will be spared this decision must contend with three obstacles to domestic proceedings: the extent of the crimes will stretch Nigeria’s criminal justice system; investigations that are likely to expose how the military could have, but failed to stop Boko Haram; and investigations that may lead prosecutors to some of the most powerful individuals in the country. These practical and political roadblocks should put the Prosecutor on notice: the interests of justice and the interests of the ICC are likely to diverge.

The Extent of the Crimes

The ICC’s preliminary examinations are based on evidence of mass arrests, torture, and summary executions committed systematically and repeatedly by security forces, resulting in thousands of deaths and disappearances. A UN report found evidence that detainees in military custody were denied food and water and, as a result, died on a daily basis. Research by Amnesty International reported that more than 7,000 men and boys died in military detention between 2011 and 2015 due to this abhorrent treatment.

The ICC Prosecutor will only open investigations if Nigeria is unwilling or unable to do so domestically. The scale of the crimes alone will test the ability of Nigeria’s criminal justice system, which already struggles to ensure due process. According to the National Human Rights Commission, 35,889 people in prison are awaiting trial, or 70% of the prison population. These figures do not include thousands of suspected Boko Haram fighters, who are detained by the military. Nigeria’s international partners have pledged their assistance to help investigate and prosecute these suspects, but military violations do not appear to be on the agenda. Nigeria would need to devote significant resources to investigating military crimes committed over several years, across three states, when witnesses are likely to be among 2.3 million displaced people. The chances of the justice system being able to handle such investigations in the near- to medium-term are slim.

The second problem is that investigations will force a re-assessment of the military’s crimes. The horror inspired by Boko Haram’s abuses has led some to rationalize military violations as the ‘excesses’ of over-zealous soldiers, doing ‘whatever it takes’ to defeat an existential threat. But the military’s violations are not an unfortunate and unintended consequence of its determination to win the war. Such euphemisms are deeply misleading. They call to mind soldiers, in the heat of battle, using disproportionate force in a firefight. In fact, the crimes being considered by the ICC occurred outside of battle, when there was no threat to person or property.

Central to understanding these violations, is realizing that the army had no reliable method of gathering the intelligence needed to fight an insurgency. Between 2010 and 2014, Boko Haram operated covertly among the population, intimidating residents into silence and occasionally stealing arms from poorly defended police and military outposts. The Nigerian military conducted itself as an occupying force. Human rights organizations have revealed soldiers’ reliance on mass arrests and torture to extract unreliable intelligence from a terrified population. Typically, in order to find their suspects, soldiers would travel in convoys to a town that Boko Haram attacked a day or two before. They would round up the residents, separate out the women, then the young children, and finally the elderly. Soldiers would detain the remaining men and boys en masse, meting out horrific beatings during arrest and on arrival in military detention. In several instances suspects were extra-judicially executed. Video clips of these so-called ‘screening’ operations, taken by soldiers themselves, were exposed in the shocking 2014 documentary “Nigeria’s Hidden War”. As no suspects were ever allowed access to a lawyer or brought to court, the evidence against them (if any) could not be tested. This process is not a reliable means for gathering intelligence and identifying suspects. Indeed, the ICC Prosecutor is considering whether singling out military-aged males in this way could constitute persecution on gender grounds. It is hard to escape the conclusion that the army was simply arresting the wrong people. Meanwhile, Boko Haram’s attacks increased in frequency and intensity, emboldened by their ability to evade capture.

Full investigations will force Nigeria to publicly confront these facts and acknowledge the military’s failure to halt the escalation of Boko Haram’s violence before it conquered towns across the north-east in July 2014. This will be painful. Many Nigerians speak proudly of their armed forces’ professionalism and contribution to international peacekeeping. However, if policymakers continue to understand violations as ‘excesses’, they will ignore the pressing need for better intelligence-gathering. Investigations and accountability should be seen as an essential component of much-needed reform to military strategy.

The Chain of Command

Lastly, there’s the problem of command responsibility. If only it were a question of a few bad apples: a handful of misguided junior soldiers that took the law into their own hands who could be prosecuted without major upset. This is not the case. Amnesty International published excerpts from leaked situation reports between commanders in the north-east to the Chiefs of Defence and Army Staff. The reports list, day by day, the number of detainees who died in military custody. For example, a situation report covering a single week states the following:

These documents demonstrate that the most senior military officers in Nigeria knew about, and took no action to investigate or end, deaths in military custody. Many of those military commanders are now retired. However, they retain significant support within the military and the government. The leaked documents constitute sufficient evidence to require the investigation of some of the most powerful individuals in the country.

Despite the government’s delay, Nigerians cannot escape the urgency of reforming the military. Soldiers are deployed across the country and too regularly commit violations. In 2016 the military extra-judicially executed and used excessive force against pro-Biafra protestors in the south-east; soldiers unlawfully killed at least 300 members of Nigeria’s Shi’a community between 12 and 14 December 2015; and in military detention facilities suspects – including children – died as a result of poor conditions during 2016. In truth, this is not new. Nigeria-watchers will be familiar with the litany of military violations stretching back decades: abusive interventions in the middle belt during the 2000s; the Odi massacre in 1999; the bloody repression of the Maitatsine uprising in the 1980s.

The same violations repeat themselves in different places at different times because no one is held accountable. The government’s reaction to these violations has always been to promise reform without providing justice. The ICC’s examination of crimes committed by the military in the north-east has the potential to change this dynamic. The Prosecutor should clearly communicate the steps Nigeria must take to demonstrate its willingness and ability to investigate these crimes. Where the Office of the Prosecutor can provide advice and expertise to strengthen Nigeria’s ability to investigate, it should do so. But there are good reasons to believe Nigeria may not be willing to investigate. The Prosecutor must be ready to step in with her own investigations, despite the risk of alienating one of the ICC’s biggest allies in Africa. Nigeria’s desire to avoid prosecutions by the ICC may be just enough to force genuine national investigations into military crimes. If complementarity can work in this case it will buck a trend going back generations.

2 Responses to Nigeria: the International Criminal Court’s Next Challenge in Africa?