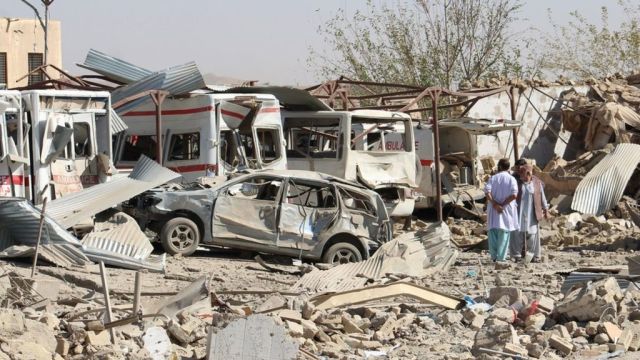 Carnage and destruction is seen following a Taliban attack on a hospital in Qalat, Afghanistan, in 2019 (Photo: Reuters)

With its landmark decision to authorize an investigation into Afghanistan, the International Criminal Court (ICC) will embark upon unknown territory. Not only will it investigate alleged atrocities committed by the Afghan military and the Taliban, it will also – for the first time – probe alleged war crimes and crimes against humanity committed by American forces and CIA operatives. The unprecedented nature of the decision has and will continue to receive great scrutiny in the coming days and weeks – and rightly so. But something else is going on too: international criminal justice is spreading across the Middle East and North Africa (MENA).

What might this mean for the region and for the ICC itself?

Historically, efforts to bring perpetrators to account through international criminal justice have largely focused on European and African conflicts. Most war crimes tribunals have been created there, and in most cases, the accused came from those regions. One contemporary blind spot has been the MENA region.

There are some exceptions: there is a court prosecuting the alleged murderers of the former Lebanese President, albeit in The Hague, not Beirut, and with none of the alleged perpetrators present for trial. Israel has put to trial a handful of perpetrators involved in the Holocaust, most famously Adolf Eichmann in 1961. The alleged genocide in Darfur has received a tremendous amount of attention from international criminal law circles, although as of yet, no justice has been delivered (that might be changing soon). The Arab Spring ushered in some hope that international justice would be a new fixture in the region; but despite an ICC intervention in Libya, no one there has been prosecuted by the Court. Meanwhile, atrocities in Syria, Bahrain, and Egypt have been swept under the rug of impunity.

Perhaps in part due to these fits and starts, interest in international criminal justice is palpable and growing. It is increasingly part of the strategic and political discourse across the region. In Kurdistan, authorities have repeatedly called on the international community to set up a hybrid court to investigate and prosecute former Islamic State fighters. Sudan’s new regime has openly declared that it wants the ICC to prosecute former President Omar al-Bashir. Mandated by United Nations Security Council, A special team of investigators is currently assisting authorities in Iraq to bring ISIS fighters to justice. The Organisation of Islamic Cooperation, of which most MENA states are members, has thrown its support behind The Gambia’s efforts to bring Myanmar to the International Court of Justice over charges of genocide. It has also lent its support to the ICC opening an investigation into Palestine and alleged international crimes perpetrated by Palestinian and Israeli factions.

Of course, one shouldn’t paint too rosy a picture. The possibility of the Arab Spring harkening a new chapter in the relationship between Arab states and the ICC has borne limited fruit. Despite the evidence being the strongest since the Nuremberg trials of the Nazis, the atrocities in Syria, among the very worst of this century, have been met with scant justice. The brazen murder of Jamal Khashoggi at the behest of Saudi Crown Prince Mohammad bin Salman and the alleged war crimes committed by Saudi Arabia in Yemen cry out for attention from international investigators and prosecutors. If Tehran won’t take responsibility and investigate the downing of Ukrainian Airlines Flight 752 itself, then it too would surely constitute a crime against humanity worthy of investigation by the ICC.

There are many reasons for this. For one, researchers of international criminal justice rarely venture to study justice and accountability efforts in the region. Few truly appreciate the complexity and sophistication of legal traditions and theories from the region.

The institutions of international criminal justice have often put the MENA region on the backburner. This was evident when, as the Arab Spring sprung, the ICC admitted that it didn’t have enough Arabic-speaking staff. There are also some fault lines over issues such as gender equality and the protection of vulnerable people, including those of the LGBTQ community, that persist and aover which proponents of international justice rightly won’t compromise on.

Sadly, there persists a sense that MENA states are more of a supplier of violence than a potential responder to them: the land that should deliver to justice the Bashirs, Saddam Husseins, al-Assads, and Bin Ladens of the world, rather than contribute to international criminal justice. This implicit bias is not unfamiliar to many African communities, which constantly have to bat away assumptions that ethnic violence and brutality is endemic to their continent. But it must be dispelled if a healthy relationship between the international criminal justice and MENA worlds is to be fostered.

Any increased engagement in the region by bodies like the ICC and its supports would have to be very careful not to replicate damaging tropes and stereotypes. But a lot of good can be achieved. The Court could increase outreach programming so that people – in the region’s legal community and more broadly – = better appreciate the ICC’s mandate, limitations, and promise. Campaigners could organize to ensure that the paltry number of ICC member-states in the region (Tunisia, Afghanistan, Jordan, and Palestine) grows, and that they are engaged in the Court’s diplomatic conferences as judges, prosecutors, investigators, and so on. The Court could set up a regional office from which some of these efforts could be launched. Researchers could also do more to try to understand the underlying politics of justice and accountability in the region, the commonalities and differences across states, and, crucially, aspects of local legal traditions that could inform and shape the future of international justice itself.