The Arab World and the ICC: A New Chapter or Smoke and Mirrors? 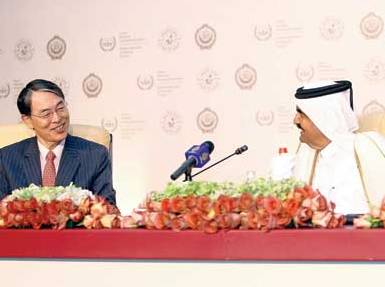 The ICC's President, left, and the Emir of Qatar opened the Court's first regional conference, in Doha, Qatar.

To date, the most fascinating, dynamic and at times frustratingly contradictory relationship the ICC has had has been with the African Union (AU) and its member states. Today, however, the relationship which appears set to define the Court’s second decade may be with the member states of the Arab League. The renewed engagement of Arab states with issues of international criminal justice has been propelled by the Arab Spring. The current level of engagement by Arab League states with the ICC is unprecedented.

In the early days of the Arab Spring, issues of justice and accountability were front and center. Within days of pushing President Zine el-Abidine Ben Ali out of power, an arrest warrant was issued for him, and Tunisia declared that it would ratify the Rome Statute of the ICC. Egypt has also expressed its desire to sign and ratify the Statute and has taken steps towards putting ousted leader Hosni Mubarak on trial. Libya, of course, was referred to the ICC in late February and earlier this month, the ICC’s Prosecutor requested arrest warrants for Colonel Gaddafi, his son Saif al-Islam and Libya’s head of intelligence services. Arab League support has been essential to the current intervention taking place in Libya. In Syria, Bahrain and Yemen, where Arab League support for intervention is lacking, there are still calls for the ICC to get involved.

Libya's Gaddafi at an Arab League summit. The ICC Prosecutor has asked the Court to issue an arrest warrant for him, his son and Libya's head of intelligence (Photo: Zohra Bensemra/Reuters)

The Arab world’s drive for justice and accountability has thus far not been a passing fad; it has not diminished but only seems to be increasingly salient and widespread. Rarely does a day go by that news out of the Arab world does not relate to international criminal justice.

In this context, let’s take a look at some of the more remarkable recent developments regarding the ICC and the Arab League states.

The Doha Conference: What a difference a few months make!

Apparently unbeknownst to Western journalists, this past week the ICC held its first regional conference. It was held in Doha, Qatar from May 24-25.

Just how remarkable was this conference? Consider that only two years ago, Sudanese President, Omar al-Bashir, indicted by the ICC for his role in the Darfur crisis, attended Arab League meetings in Doha which resulted in the regional body declaring its “solidarity with Sudan and…rejection of the ICC decision” to issue an arrest warrant for Bashir.

Further, as Wasil Ali, the Deputy Editor in Chief at the Sudan Tribune notes, the conference was originally planned for last year. Pressure from Khartoum ensured that it was postponed. This year, however, seemingly no support for Bashir was voiced by delegates at the conference. Instead, a steady stream of support for the principles of international criminal justice defined many moments during the proceedings in Doha.

“We must show our keenness to combat the crimes of aggression, genocide, war crimes and crimes against humanity and confirm our insistence on the need to bring the perpetrators to justice, in order to maintain global security and stability, and out of respect for human beings’ dignity and legitimate rights.” 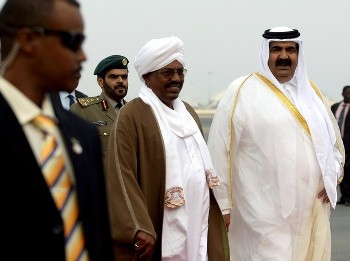 At the conference, the Emir and the ICC’s Chief Prosecutor, Luis Moreno-Ocampo were scheduled to meet for about 20 minutes. In what will surely frustrate the Court’s political critics, their meeting ended up taking over an hour. Qatar’s Attorney General subsequently hosted a lunch for the Attorney Generals as well as for Moreno-Ocampo.

Meanwhile, capitalizing on the spreading desire among Arab citizens to achieve justice and accountability, the ICC has smartly instigated a grassroots approach to greater Arab participation in its work. The ICC has launched a campaign, named “Calling Arab Lawyers”, to increase the number of Arab professionals able to practice before the Court. The ICC reasons, quite soundly, that its increased case load in the Arab world (both Libya and Sudan are Arab League states) suggests that the Court should promote greater Arab representation amongst lawyers capable of working at the ICC. Currently, Arab lawyers make up less than 4 percent of the ICC’s list of eligible counsel and assistant counsel.

The following passage is from the Court’s official statement:

“Citing the importance of language, culture and a deep understanding of the conflicts from which cases may arise, the ICC Registrar, Ms Silvana Arbia, said at the launching of the campaign, ‘In cases involving crimes allegedly committed in the Arab region, it logically follows that lawyers from Arab countries should be involved in ICC proceedings representing either defendants or victims”. She added, “This is critical, not only to the ICC, but also to the advancement of international criminal justice, especially due to the recent developments in Arab countries.”

Of course, the conference was not all rosy. At times it seemed that expediently supportive rhetoric dominated over meaningful action. Further, a number of key issues which many Arab leaders see as barriers to accession to the Rome Statute as well as contradictions in the pursuit of international justice were raised.

There was no avoiding the elephant in the room: the question of Israel and Palestine. In his remarks, the Emir of Qatar brought up what he sees as the failure of the ICC to seek accountability for alleged crimes in Palestine:

“…if we haven’t seen a global consensus on the compulsory jurisdiction of the ICC, to which many countries have declined to accede to its founding statute, we have to acknowledge that this statute does not accommodate many of the serious crimes against which the court was incapable of achieving justice, such as those crimes that have been perpetrated and are still being committed against civilians under occupation in the Gaza Strip.”

An Arab Spring poster. Central to the movements in these countries has been a demand for justice and accountability

Qatar’s Attorney General, Al Bin Fetais al Marri, also added his concerns about a double standard regarding the treatment of Palestine and Israel:

“Between the Arab world and the courts there is a big problem of misunderstanding…The court needs to go for justice…That double standard is not acceptable.”

Perhaps the most interesting and insightful criticism levied during the conference, as articulated by Qatar’s Emir, regarded the relationship between the Court and the UN Security Council:

“…the power granted to the UN Security Council to activate or stop the functioning of the Tribunal might contradict the independence mandatory for the tribunal to perform its tasks.”

In the end, the conference may have been more about establishing a forum for dialogue and understanding than achieving any tangible goals. But that the conference was held at all demonstrates a dramatic and impressive shift in the attitudes of the Arab world towards international criminal justice generally, and the International Criminal Court, in particular.

In the meantime, there have been important developments relating to the ICC in individual Arab states.

According to Qatar’s News Agency, the country’s Minister of Justice, Hassan bin Abdullah Al-Ghanim, maintained that many Arab countries, including Qatar, are considering signing and ratifying the Rome Statute. During the Doha conference, the Attorney General of Qatar similarly suggested that the country was leaning towards ratifying the Rome Statute. Interestingly, Al-Ghanim was also reported saying that the issue of acceding to the treaty is always going to be a key item on the agenda of Arab League meetings for Arab Ministers of Justice.

ICC Prosecutor Luis Moreno-Ocampo met with the Emir of Qatar for over an hour. They were scheduled to talk for twenty minutes.

Tunisia is apparently very close to ratifying the Rome Statute. One report suggested that Tunisia will deposit its formal request of accession to the ICC at the UN in the next few days. Ali argues that this is of critical importance for the crisis in Libya because Tunisia “is the main outlet for Libyan officials.” If Tunisia follows through, it will be the first north African state to ratify the Statute.

Egypt
The transitional government in Egypt has put itself in a precarious position. On the same day as Foreign Minister Nabil El-Arabi declared Egypt’s intention to join the ICC, another Egyptian diplomat clarified that it would not affect Egypt’s support of Bashir and that the Sudanese President could visit at any time without fear of detainment. How Egypt expects to have its cake and eat it too remains unclear. Nevertheless, Egypt appears unflinching in its mission to sign and ratify the Rome Statute. This week the foreign minister reaffirmed that the country was working towards joining the ICC.

There’s no doubt that the diplomatic niceties and the increasingly real possibility of key Arab League states joining the ICC has made the government in Khartoum nervous and uncomfortable. Bashir has spent a tremendous amount of time and resources on attempting to isolate the Court and to demonstrate that it is powerless. All of the above developments among Arab states undermine his capacity to achieve either.

Omar al-Bashir at an Arab League summit. The Sudanese government is livid over Egypt's plan to join the ICC.

Pouring salt on the wounds, as it were, Bashir appears more isolated now than in previous months. While the Sudanese President managed to visit Djibouti, a member-state of the Court, he was unable to visit Nigeria, Comoros or Uganda. Furthermore, the Sudanese government was apparently seething over the Egyptian Foreign Minister’s meeting with ICC Prosecutor Moreno-Ocampo.

It is important to remember that, like the African Union, Arab League states may not be as united in their support for Bashir as they put on publicly. A high-ranking official at the ICC once told me that in meetings between African leaders and Court officials, many said that they thought Bashir should face justice but they would not be able to say so in public. The very same could be true for Arab League states.

A New Chapter or Smoke and Mirrors?

During the Doha Conference, the ICC’s President evoked the Arab Spring in his challenge to Arab states to join the Court:

“At a time of political upheaval and uncertainty for several countries of this region, what better time to embrace the ICC, an institution that represents justice, security and peace?”

Talk is one thing but in order to be increasingly representative and universal, the ICC needs states to ratify the Rome Statute and to abide by its obligations. It is important to remain realistic. It is uncertain to what extent the movements of key Arab state governments towards becoming members of the ICC will result in greater Arab presence in the Court.

It seems likely that states joining the ICC will continue to so on an ad hoc basis. It would be wishful thinking to believe that the Arab League would jump into the arms of the Court all at once. Nevertheless, it is quite possible that in the coming months ratifications by Tunisia, Egypt, and Qatar will double the Arab world’s representation at the ICC – and that’s nothing to scoff at. The Court and its supporters no doubt hope that this will result in the floodgates opening and other states joining subsequently.

Only time will tell whether recent developments mark a new chapter in the relationship between the Arab world and the International Criminal Court or whether it is all – or mostly – smoke and mirrors. One thing, nevertheless, is abundantly clear: never has the engagement of Arab states with the ICC been more promising, the prospects of their membership in the Court more real, and the thirst of their people for ending impunity more widespread than it is today.

1 Response to The Arab World and the ICC: A New Chapter or Smoke and Mirrors?