Daniela Lai joins JiC for this guest-post. Daniela is a Senior Lecturer in International Relations at London South Bank University. Her forthcoming book with Cambridge University Press, Socioeconomic JusticeInternational Intervention and Transition in Post-war Bosnia and Herzegovina, will be available in June 2020. 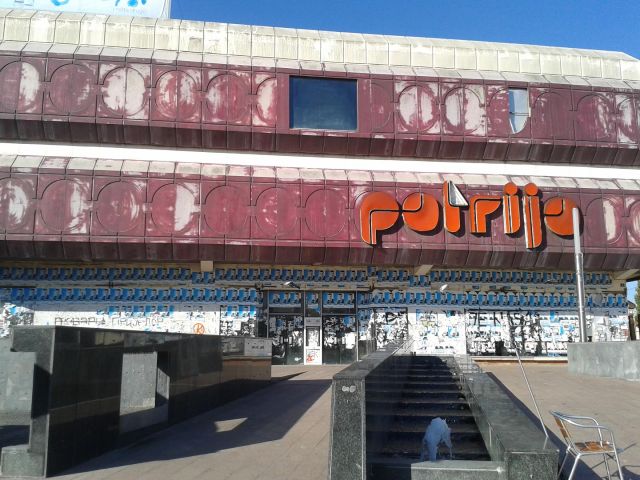 (A former shopping centre in the main square of Prijedor, which is today being torn down. Photo: Daniela Lai)

Socioeconomic issues have moved from the margins of transitional justice to being considered an important part of both scholarly debates and ambitious justice programmes. For too long, justice in the aftermath of conflict and mass violence was understood in strictly legalistic terms, producing a partial view of wartime violence and post-war justice, one that had become increasingly alienated from its local constituencies. A more comprehensive (and overdue) analysis of how people experience socioeconomic violence in war and develop socioeconomic justice claims should be grounded in people’s lived experiences. It should also scrutinise international interventions as they shape both post-war justice and political economy.

The evolution of transitional justice

For a relatively young field of research and practice, transitional justice has undergone a lot of change over the past few decades, with some scholars even arguing it is now in its ‘fourth generation‘. The field has been deeply shaped by its connection to international humanitarian law (IHL) and by the political context within which it emerged (transitions to liberal democracy market economies, as well as liberal peacebuilding). For most of this time, socioeconomic issues have remained at the margins of the field, at best addressed through some form of monetary compensation for violations of IHL or personal rights, at worst overlooked even in the face of their evident relevance.

In the past decade or so, however, practitioners and scholars have started calling for a more explicit engagement with socioeconomic issues, be it in the form of social and economic rights or redress for structural inequalities that have led to or stemmed from political violence and atrocity. These developments have generated academic controversies over what transitional justice really is, whether it is realistic or even desirable to expand its scope beyond established mechanisms, or expect it to produce transformative change.

However, these debates still omit an interdisciplinary and bottom-up analyses of how communities affected by conflict experience violence in its multiple forms (including socioeconomic violence), and how these experiences inform the development of justice claims that go beyond conventional transitional justice approaches. In my book Socioeconomic Justice: International Intervention and Transition in Post-War Bosnia and Herzegovina, I address these questions and look at how international interventions interact with socioeconomic justice claims in the aftermath of war I draw on in-depth qualitative research carried out in Bosnia and Herzegovina (including interviews with people living in the cities of Prijedor and Zenica, with activists from all over BiH, and international officials based in Sarajevo). The arguments and findings of my research demonstrate just how much our field has missed by relegating socioeconomic violence and justice claims to its margins. I understand justice as a social practice characterised by contestation around its meanings and the strategies and claims through which it is pursued, and as the process through which violence and injustice are redressed. Justice is also defined as multidimensional: in my book, I focus on its socioeconomic dimension while also looking at how it intersects with other crimes, including ethnic-based violence.

First, political economy is crucial to the definition of socioeconomic violence. The book draws on Nancy Fraser‘s work on justice but rethinks it for a war/post-war context. Exploitation, marginalisation and deprivation take on extreme and violent forms as communities are deprived of means of subsistence, exploited in the dangerous conditions of the military effort, affected by widespread destruction of homes and infrastructure, and by dispossession through eviction, displacement and profiteering. In the city of Prijedor, for instance, once non-Serb workers were fired, the iron ore mines that employed thousands of locals were turned into camps where detainees were tortured and killed.

Second, political economy informs the understanding of justice itself, of how to remedy the consequences of such violence, through redistribution, reparation and the democratisation of economic decision making. This was reflected in many of the justice claims put forward by interviewees from Prijedor and Zenica. They asked for their jobs back after being fired. In Zenica, they demanded greater involvement in economic and political decision-making processes around the privatisation and operation of the steel mill that was contributing to environmental pollution in the city. Large popular protests that swept through BiH in 2014 were, at least in part, a reflection of these unheeded claims. However, the legacies of wartime violence and injustice become protracted in time and, especially in the context of a post-war transition where economic policies conform to international neoliberal prescriptions, socioeconomic justice becomes elusive.

Third, justice and political economy are closely intertwined both from the perspective of local communities and in the operation of international interventions. For the former, a strict separation between the remits of post-war justice and economic interventions does not capture their experience of the war and transition, it is artificial and constraining: the experience of losing one’s job and workplace went hand in hand with deprivation of basic means of survival, displacement and ethnic cleansing. When analysing international interventions into justice processes, a political economy approach looks beyond courts, trials and rule of law programmes, to examine the role of international financial institutions promoting economic reforms such as privatisations, macroeconomic stability programmes and austerity packages linked to loans – all of which go to the detriment of socioeconomic justice as redistribution.

This political economy analysis allows us to rethink international interventions, by analysing the justice implications of economic reforms and the socioeconomic dimension of justice programmes.

In the Bosnian context, this meant expanding the analysis from the establishment of the International Criminal Tribunal for the Former Yugoslavia in order to look at the limited and flawed programmes for monetary compensation that privileged veterans at the expense of civilian victims, and refugee return policies that facilitated access to housing, but not employment and socioeconomic reintegration that could help rebuild communities and social ties.

This political economy approach also called for an analysis of the effects of privatisation and labour reforms from a justice perspective, starting from the conditions of groups that had been affected by widespread socioeconomic violence in the war. As they sought to transform Bosnia into a market economy (a principle even enshrined in the Preamble to the Constitution), International financial institutions (IFIs) promoted reforms that foreclosed opportunities for people to claim their right to work, or even meaningful compensation for workplace discrimination or ownership rights. While not widely understood as justice issues, nor analysed in the scholarship on post-war justice, IFI interventions are as much a part of the process of negotiation and contestation of justice claims stemming from legacies of wartime violence. The moment when this became most visible was the protest movement of 2014, which established a clear link between the legacies of the war and grassroots demands for social justice and meaningful democracy.

Socioeconomic justice should be central to our analysis of transitional justice processes and dealing with the past. My research in Bosnia and Herzegovina highlights three important starting points for further research on this topic.

First, it demonstrates that, from the perspective of conflict-affected communities, socioeconomic violence in war was widespread, and its legacy long-lasting. Second, it shows that mainstream transitional justice mechanisms were ill-suited to address socioeconomic justice claims, which then found an expression through grassroots movements. Lastly, it also establishes a connection between the study of post-war justice and that of political economy, which is grounded in locally lived experiences and simultaneously geared towards analysing the work of international organisations intervening in conflict-affected contexts.

While providing a platform for Bosnian experiences and perspectives that do not conform to predominant narratives of the war and transition, I hope that my book will prompt more research on similar topics and other contexts. Most importantly, I hope it will pave the way for new debates on the political economy of transitional justice, including the role (and accountability) of economic actors such as IFIs and multinational corporations in conflict-affected contexts.

Mark Kersten is a consultant at the Wayamo Foundation, a Senior Researcher at the Munk School of Global Affairs, and a law student at McGill University Law School. He is also author of the book, 'Justice in Conflict - The Effects of the International Criminal Court's Interventions on Ending Wars and Building Peace' (Oxford University Press, 2016).
View all posts by Mark Kersten →
This entry was posted in Bosnia and Herzegovina, Economics of Conflict, Transitional Justice and tagged Daniela Lai. Bookmark the permalink.