Ruwadzano Patience Makumbe and Jonathan Ochom join JiC for this post on the African Court on Human and People’s Rights and states withdrawals from declarations permitting NGOs and invidious to file cases before the Court. Ruwadzano is a Zimbabwe human rights lawyer and is currently a Hillary Rodham Clinton Global Challenges Scholar at Swansea University. Jonathan is a Ugandan human rights lawyer; the co-founder of Legal Hub Uganda and is a Chevening Scholar at Swansea University. The views and opinions expressed in this article are those of the authors alone and do not represent the position of any organisation. 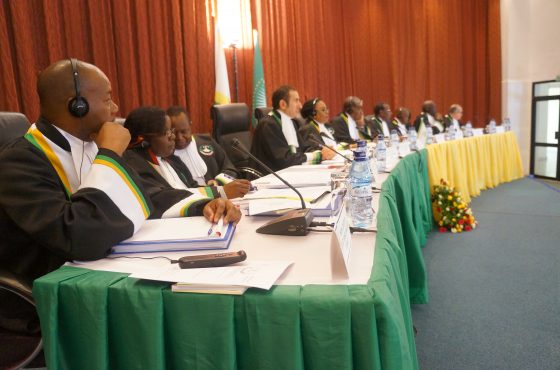 The African Court on Human and Peoples’ Rights (hereinafter, the Court) remains critical to Africa’s quest for human rights accountability. The mechanism provides states the discretion to accept the declaration allowing NGOs and individuals to institute cases before the Court. This is significant as almost all cases that the Court has heard have been filed by individuals. However, a growing number of member states are withdrawing their declarations, with Benin and Côte d’Ivoire being the latest states to withdraw, in early 2020. This casts doubt on the Court’s sustainability and ability to deliver on its mandate. In this piece, we scrutinize the strengths and limitations of direct access of individuals and NGOs as well as the option to withdraw the declaration available to member states, the political undertones shaping States’ withdrawals, and the implications on Africa’s human rights trajectory.

The Protocol  to the African Charter on Human and Peoples’ Rights on the Establishment of the African Court on Human and Peoples’ Rights recognises human rights as a tool for achieving the legitimate aspirations of the African peoples. Article 3 gives the Court jurisdiction to interpret and apply the Charter, the Protocol, and any other applicable human rights instruments ratified by member states of the African Union. Article 5 (3) grants the Court discretion to permit relevant NGOs with observer status before the Commission as well as individuals to directly initiate cases before the Court in accordance with article 34 (6). This provision broadens the Court’s jurisdiction to address gross human rights concerns. It also raises technical issues with a bearing on human rights accountability. Firstly, granting observer status to NGOs is a discretionary power and is thus inherently exclusionary. Secondly, the reliance on State declarations to permit direct access to NGOs and individuals inadvertently makes accountability optional to States. Whereas this route is politically expedient, it is disappointing as it delinks the Court from the primary rights holders: African citizens. It has essentially made human rights accountability at the regional level an elective matter, empowering States to decide who can hold them answerable for human rights violations in their countries and who cannot.

Generally, international law permits parties to international treaties and agreements to withdraw from such arrangements in conformity with the provisions of the treaty or through parties’ consent. For risk-averse governments, withdrawals are a strategy for dealing with the unpredictable nature of international commitments as well as unforeseen domestic developments. A withdrawal, according to the Vienna Convention on the Law of Treaties discharges a State party from the obligations under a particular instrument. In the human rights context, the inclusion of discretion in article 34 (6), stems from the pervasive fear of embarrassment by NGOs and individuals among African States. However, for victims of human rights violations, the existence of voluntary accountability mechanisms such as the declaration under article 34 (6) has grave implications.

The primary consequence of a withdrawal of the declaration allowing NGOs and individuals direct access to the Court is that it deprives victims of human rights violations access to an effective judicial remedy at the regional level. It therefore threatens the right to an effective remedy which is well established in the Universal Declaration of Human Rights and the International Covenant on Civil and Political Rights. Moreover, the Basic Principles and Guidelines on the Right to a Remedy and Reparation for Victims of Gross Violations of International Human Rights Law and Serious Violations of International Humanitarian Law (2005) articulates the right as a means to protect the right to equal and effective access to justice, adequate, effective and prompt reparation for harm suffered and the right to truth.

The Court generally serves to promote access to justice and contributes to development and transitional justice in the continent. Benin has noted that its withdrawal is motivated by the Court’s interference in areas beyond its competence, resulting in a serious disruption of the national legal order and legal uncertainty negatively affecting its economic appeal. It has also stated that, in the cases of Ghaby Kodeih Republic of Benin and Ghaby Kodeih & Nabih Kodeih v Republic of Benin, the Court issued provisional orders on a matter that could be resolved by domestic judicial bodies. It appears Cote d’Ivoire’s decision to withdraw its declaration was influenced by a provisional order issued by the Court a few days prior, in favour of Guillaumo Kigbafori Soro, a rebel leader and previous Prime Minister. The Court suspended an arrest warrant against him pending the finalisation of the case on its merits.

In both cases, it is concerning that the underpinning reasons for States’ withdrawal of the declaration is their dissatisfaction with decisions of the Court against them. The latest withdrawals by Benin and Côte d’Ivoire are clearly a culmination of their dissatisfaction with decisions relating to human rights issues. This is not constructive and fails to adequately prioritise human rights protection. Member States of the African Union commit to Agenda 2063 which guarantees respect for human rights, justice, and the rule of law. This not only justifies continued flagrant disregard for the rule of law but also promotes the use of Articles 5 (3) and 34 (6) as political tools to undermine the independence and efficiency of the Court and respect for human rights in Africa.

The current state of human rights on the African continent evidences the need to strengthen regional human rights bodies. This is further illustrated by how judicial mechanisms in many African states do not enjoy independence from political powers. Despite the Court’s provisional order suspending the arrest warrant issued against Soro in Cote d’Ivoire, he was convicted in absentia, after a one-day trial, and sentenced to 20 years’ imprisonment. This was also reflected in Uganda. In August 2019, Dr. Stella Nyanzi was convicted on charges of ‘cyber harassment’ over comments she posted on Facebook criticizing President Yoweri Museveni. International organizations criticized this as a flagrant disregard for freedom of expression and exploitation of the judiciary for political purposes, but to no avail. In Benin too, the human rights situation signals a downward trend with journalists and political activists being prosecuted under repressive laws restricting rights to freedom of speech and freedom of the press.

The Court is meant to allow for access to justice where local remedies prove to be unavailable, insufficient, or ineffective. Where national judicial mechanisms are overshadowed by politics, victims are left without any avenue for redress. Withdrawal of the declaration under article 34 (6) is a clear renunciation to being held accountable. It is apparent that there cannot be a substitute for strengthened and effective national judicial mechanisms. But the space that the Court holds remains significant.

Out of the thirty member states of the Court, only ten states (Benin, Burkina Faso, Cote d’Ivoire, Gambia, Ghana, Malawi, Mali, Rwanda, Tanzania, and Tunisian) have ever made the declaration under article 34 (6). Currently, there remains just six African States that have made the declaration; Burkina Faso, Ghana, Malawi, Mali, Tunisia, and the Gambia. The reduced numbers are a testament to the contested nature of the Court but also an indication of the opportunities for reform.

The Court serves as an important platform in the promotion of human rights through its extended jurisdictional powerswhich allow it to consider human rights violations provided not only in the Charter but also other treaties. It must be possible to have a balance between state sovereignty and respect for the Court, grounded in a recognition of the importance of protecting human rights.  It is therefore critical that attitudes towards the Court are driven by strengthening justice institutions in Africa rather than playing politics by other means.

Mark Kersten is a consultant at the Wayamo Foundation, a Senior Researcher at the Munk School of Global Affairs, and a law student at McGill University Law School. He is also author of the book, 'Justice in Conflict - The Effects of the International Criminal Court's Interventions on Ending Wars and Building Peace' (Oxford University Press, 2016).
View all posts by Mark Kersten →
This entry was posted in African Court on Human and Peoples’ Rights, Human Rights, Ivory Coast / Côte d'Ivoire and tagged Jonathan Ochom, Ruwadzano Patience Makumbe. Bookmark the permalink.