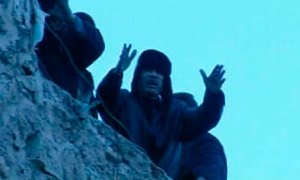 Could Gaddafi find himself in a Hague Courtroom? (Photo: Guardian)

The situation in Libya has been referred to the ICC by the UN Security Council. Much talk was made of international justice in Arab states in recent weeks. No doubt many are celebrating the impressive commitment the UN Security Council has made. Along with the referral, the Council agreed to impose an arms embargo, asset freeze and travel ban on Gaddafi, his family members and close aides.

In response to suggestions that the situation in Libya could be brought to the Court, Luis-Moreno Ocampo, the ICC’s Prosecutor, last week declared that “[t]he decision to do justice in Libya should be taken by the Libyan people” and that either Libya would need to become a state party to the Rome Statute or the situation would have to be referred from the UN Security Council in order for the ICC to investigate. Yesterday, the Security Council did just that. Libya becomes the sixth situation under full investigation by the ICC – Uganda, Sudan, the Democratic Republic of Congo, the Central African Republic and Kenya are the others.

Some interesting initial issues/challenges to note about this development:

The referral was unanimous despite a significant number of non-ICC state parties on the Security Council, including India, China and Russia. For supporters of the ICC and international criminal justice, this is quite an impressive feat. The ICC has been going through some rather difficult times in recent months. Both on a political level and in the current cases being heard, many have expressed concerns. Just last month the Economist published a piece with the title: “The ICC and Africa: Dim Prospects“. However you break it down, the referral of the Libyan crisis to the ICC is powerful evidence that there is still a belief amongst the international community that the ICC remains an important international institution. More importantly, the momentum and level of international support for justice in Libya makes the arrest and future trial of Gaddafi a distinct possibility. The extent to which that would be a victory for international justice and its proponents cannot be understated. Nevertheless, as William Schabas warns, it is not merely a victory for the ICC, but a test to “inspire confidence in its ability to provide a meaningful, significant and above all prompt response to the crisis.”

During Security Council negotiations, there was significant disagreement about whether or not to refer the situation to the ICC at all. The primary source of ambivalence by some states, including India, Brazil, Gabon and Portugal, revolved around whether peace and justice should be sequenced. India argued for a “calibrated approach”. A compromise was reached through a preambular reference in the Security Councils referral to Article 16 of the Rome Statute. Article 16 allows the Security Council to defer ICC investigations for a year. It can do so repeatedly on a yearly basis. Claims for an Article 16 deferral have been voiced consistently in the case of the arrest warrant against Sudanese President Omar al-Bashir. Somewhat ironically, as the Sudan Tribune points out, Gaddafi was among the most staunch critics of the ICC indictment of Bashir and one of the strongest proponents of the arrest warrants’ deferral. 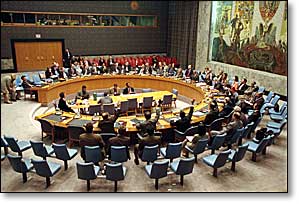 The UN Security Council has referred the situation in Libya to the ICC (Photo: un.org)

As with the 2005 UN Security Council referral of the situation in Darfur to the ICC, this Council’s resolution includes a provision which explicitly removes citizens of non-state parties from the jurisdiction of the Court. Operative paragraph 6 of the Resolution reads that the Council:

“Decides that nationals, current or former officials or personnel from a State outside the Libyan Arab Jamahiriya which is not a party to the Rome Statute of the International Criminal Court shall be subject to the exclusive jurisdiction of that State for all alleged acts or omissions arising out of or related to operations in the Libyan Arab Jamahiriya established or authorized by the Council, unless such exclusive jurisdiction has been expressly waived by the State”

Brazil, as it had with the referral of Sudan, expressed serious concern:

“Brazil was a long-standing supporter of the integrity and universalization of the Rome Statute, and opposed the exemption from jurisdiction of nationals of those countries not parties to it.  Brazil, therefore, expressed its strong reservation to the resolution’s operative paragraph 6, and reiterated its firm conviction that initiatives aimed at establishing those exemptions were not helpful to advance the cause of justice and accountability.” 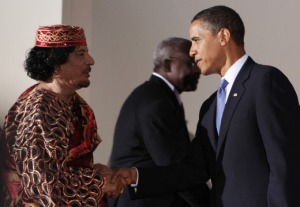 It is important to remember how cozy relations between Western states and Gaddafi have been in recent years (Photo: Foreign Policy)

The exclusion of non-state parties from the Court’s jurisdiction remains a fundamental problem in the referral of situations to the ICC. It originally occurred because of pressure from the US when the Council referred the situation to Darfur in UN Resolution 1593. Had it not been included, the situation in Darfur would never have been referred to the ICC. The Council’s referral of Libya to the ICC, however, appears establish this provision as a mainstay in referrals. The problem, as Robert Cryer has explained, is that it implies a double standard: only some types of individuals can be prosecuted, namely those that are citizens of states signed onto the Rome Statute. In a 2006 article, Sudan, Resolution 1593, and International Criminal Justice, Cryer argued the following, equally applicable to this case:

“the legitimacy of the referral is impaired by the a-priori exclusion of non-party state nationals from the jurisdiction of the ICC…the point is not that the jurisdiction of the ICC will be significantly limited in a practical fashion, but that the exclusion of some states’ nationals fails to respect the Prosecutor’s independence and makes it difficult to reconcile the resolution with the principle of equality before the law. Some states’ nationals, it would appear, are more equal than others.”

Lastly, the Security Council’s resolution includes a clear temporal jurisdiction. Only events since February 15 2011 have been referred to the ICC. What this means in practice will be interesting. However, it is important to remember just how cozy Western leaders have been with Gaddafi in recent years. With this jurisdictional limitation, relations between the regime in Libya and the international community cannot be investigated.

For another great analysis, focussing on legal issues, check out Xavier Rauscher’s piece at The International Jurist.

Mark Kersten is a consultant at the Wayamo Foundation, a Senior Researcher at the Munk School of Global Affairs, and a law student at McGill University Law School. He is also author of the book, 'Justice in Conflict - The Effects of the International Criminal Court's Interventions on Ending Wars and Building Peace' (Oxford University Press, 2016).
View all posts by Mark Kersten →
This entry was posted in Article 16, International Criminal Court (ICC), Libya, Libya and the ICC, Sudan, UN Security Council, United States. Bookmark the permalink.

14 Responses to Libya Referred to the ICC – Initial Thoughts