Ratko Mladic, soon after being arrested in Serbia

In a post a few months back, I pondered what a trial of Gaddafi would be like, given his aptitude for emotional and delusional outbursts. It was at that time that legal scholar Dov Jacobs of Spreading the Jam suggested that in the case of Gaddafi, it was entirely possible that no trial would go forward on the basis of his mental health.

So what about the 69-year old Mladic? Is he mentally and physically fit enough to stand trial?

A report by Radio Netherlands Worldwide showed video footage of Mladic in detention with a serious limp. The report also suggested that the questioning of Mladic had to be delayed because of his poor health. Other reports indicate that Mladic’s arm is paralyzed and that he may have suffered a series of strokes in recent years.

Mladic’s lawyer maintains that his client’s health is poor and as a result, he should not be extradited to The Hague (see also here). Of course a degree of skepticism must arise when lawyers speak of their client’s health. It is in Mladic’s interest to delay his extradition and a trial for as long as possible. In any case, today, a judge in Serbia ruled that Mladic could be sent to The Hague and was fit to stand trial.

As for the ICTY, it is undeterred by Mladic’s health and predictably so. It would be a huge victory and a signal of its continued importance and effectiveness to put Mladic on trial in the same court room in which his partner in crime, Radovan Karadzic is being tried and where Slobodan Milosevic was tried before them. 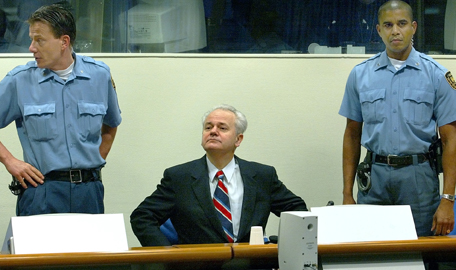 Questions of Milosevic's health plagued his trial at the ICTY (Photo: Paul Vreeker/AP)

It is important to remember that the ICTY has already been plagued by problems arising from its handling of health issues, most dramatically in the case of Milosevic.

When Milosevic became ill and his trial began to suffer from significant delays, judges ruled in favour of forcing a lawyer on the former Serbian President. Many decried the decision as contradicting the basic right of a defendant to represent himself. One critic, John Laughland, writes:

“As the judges themselves admitted when they imposed the lawyer, there is no precedent anywhere in any jurisdiction in the world for imposing a lawyer against a defendant’s will because he is sick. Moreover, the decision was taken specifically to allow trial in absentia, which is normally frowned upon or illegal…

…As it turned out, the decision was a disaster. Milosevic had lined up over ninety Defence witnesses and most refused to come, saying that they would testify only if Milosevic himself cross-examined them. The trial effectively ground to a halt…Within three months of having taken the decision to impose counsel, the Appeal Chamber convened to overturn the arrangements and effectively restore the status quo ante.”

Milosevic died in March 2006 prior to any verdict being handed down. 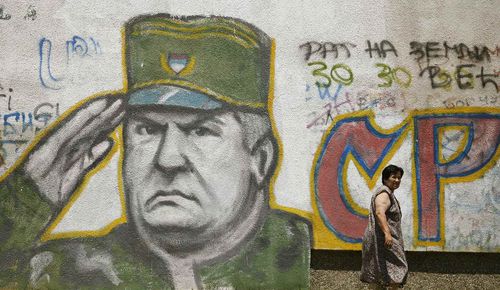 Many are rightfully celebrating the arrest of Mladic, seen here depicted on a mural (Reuters)

Mladic’s case is a good reminder of the need to guarantee the rights of the accused. It may be the last thing that many people are, or want to be, thinking about right now, especially Mladic’s victims. But guaranteeing that the rights of the accused are respected is essential if international criminal justice is to deliver just that – justice. The fair conduct of a trial and procedural justice may be underrated and even uninteresting to many, but it is the foundation upon which law can be blind, even-handed and fair.

If and when Mladic does stand trial, it will be a long and arduous process. Defenders of international criminal justice will face questions about the length of the trial as well as its cost, two points of criticism which have long haunted the ICTY. In this context it is also at least worth thinking about whether Mladic’s trial will reach a conclusion prior to his death and, if it doesn’t, what that means for justice. It is an uncomfortable reality that when an alleged criminal dies before a verdict is reached, the alleged perpetrator is legally innocent.

Mladic appeared frail and walked with a limp following his arrest

The world is anticipating the trial of the man who orchestrated some of the worst acts of violence in modern European history. There is a deep-seated desire to see the final member of the Balkan trinity face justice for his acts. Indeed, some see this as a final end point for the conflict in Serbia. But it is also worthwhile remembering that in order for justice to be served, it must be fairly pursued. As the ICTY’s first Prosecutor, Richard Goldstone recently explained, it is more important, for the pursuit of justice, that cases are lost rather than won, if they are won by unfair means.

We are right in welcoming the detention and trial of Mladic. It is a historical and remarkable achievement. But we must be ever vigilant that justice, even and especially for the most vile and inhumane individuals, is served fairly.

Reports from sources inside the Serbian courtroom where Mladic presented himself for extradition hearings suggest that he is mentally fit. Mladic is reported to be mentally clear and sharp. He also apparently asked for strawberries, Russian literature and television while he stays in detention.

Mark Kersten is a consultant at the Wayamo Foundation, a Senior Researcher at the Munk School of Global Affairs, and a law student at McGill University Law School. He is also author of the book, 'Justice in Conflict - The Effects of the International Criminal Court's Interventions on Ending Wars and Building Peace' (Oxford University Press, 2016).
View all posts by Mark Kersten →
This entry was posted in Balkans, Genocide, Human Rights, ICTY, Justice, Libya, Serbia, Slobodan Milosevic. Bookmark the permalink.

1 Response to Pursuing and Serving Justice Fairly: Is Mladic Fit to Stand Trial?