Used and Abandoned: Libya, the UN Security Council and the ICC

Gaddafi with some of his recent economic, political and military partners (Photo: Oli Scarff/Getty Images)

It hasn’t been a particularly good week for the ICC. First, came the mistaken confirmation by the Office of the Prosecutor (OTP) that Libyan rebels had detained Saif al-Islam. Within hours of the “confirmation” it became clear that Saif was not under arrest. Reports have emerged revealing that the ICC was preparing to enter into negotiations with the rebels’ National Transitional Council (NTC) on transferring Saif, as well as the recent admission that the the OTP had never actually spoken to anyone who could authoritatively confirm Saif’s arrest. Adding insult to injury, Saif even took the time to give journalists a mini-tour of what remains of Gaddafi-loyalist held Tripoli.

Second, the talk of trying the Tripoli Three – Muammar Gaddafi, Saif and the Gaddafi regime’s intelligence chief, Abdullah al-Senussi – by Libyan authorities poses a profound challenge to the Court: If the Gaddafis and al-Senussi can be tried in Libya, by Libyan officials, despite the lack of a functioning, legitimate and independent judiciary for over forty years, then what was the point of getting the ICC involved in Libya in the first place?

The short answer, it would appear, is that the international community used the Court for political ends.

It wasn't a great week for the ICC which confirmed that Saif al-Islam Gaddafi had been detained by rebels only to watch him on TV, giving tours of Tripoli to journalists

Back in February when the UN Security Council decided to refer the situation in Libya to the ICC under Resolution 1970, the sensible conclusion many observers drew was that the Court would be in charge of bringing those most responsible for the crackdown on peaceful protesters in Libya to account. But even back in those early, hazy days of the Arab Spring, there were hints that the ICC was being instrumentalized for political purposes by the Council. The referral disallowed the investigation of any citizens of states not party to the ICC and imposed a jurisdictional wall for the Court by barring it from investigating events prior to February 15 2011.

Shortly after the UN Security Council referral, I wrote a piece in which I considered whether the Council had “outsourced” responsibility for peace in Libya to the ICC, happily watching as the Court was deflecting blame for ongoing violence. The case of Darfur made this a palpable possibility. Now that some form of peace appears inevitable in the comings weeks and months in Libya, it may not be possible to say that the Council did, in fact, outsource responsibility for peace to the Court. But, in a similar vein, the Court may have been used by the international community for interests which had very little, if anything, to do with justice and everything to do with politics.

The international community, and in particular an embarrassed set of Western states who had literally and figuratively propped up and cozied up to Colonel Gaddafi’s regime by becoming economic, military and political partners with him, capitalized on an unprecedentedly widespread support for intervention in Libya. In the span of just days even the most starry-eyed internationalists watched, stunned, as the UN Security Council passed two resolutions – one which imposed a no-fly zone over Libya, citing the Gaddafi regime’s failure in their “responsibility to protect” their citizens, and another which referred the situation to the ICC. Not even China and Russia, the most pesky stalwarts against any possible withering of the principle of sovereign non-intervention stood against the tides of international justice. The Arab League and the African Union jumped on board too, something which would have been preposterous to propose just a few months prior. 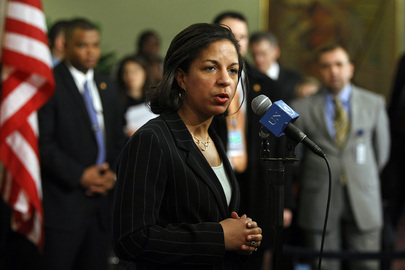 According to some, a rift has emerged between Susan Rice and the ICC over where the Tripoli Three should be tried.

Of course, the cohesiveness and unity amongst international actors has not weathered the turbulent nature of the conflict particularly well. Regardless, while some commentators were quick to argue that the largely unanimous international support for the ICC’s intervention in Libya suggested a new era for the Court, it would appear instead that the Court may have been supported because it served the political interests of the parties involved. In other words, UN Security Council states understood that the Court could help or, at least not hurt, in isolating Gaddafi and removing him from power. Recent developments indicate that whether or not Gaddafi would end up in The Hague was, at best, an afterthought and, at worst, irrelevant.

The support for the ICC from the UN Security Council as a body and from its constituent member states has not been anything to write home about. On the contrary, the Council has essentially abdicated its responsibility to support the ICC. Surely, by referring a situation to the Court, the ICC should be able to expect that the UN Security Council will push for the Court to succeed. Apparently not.

While the UN Secretary General continues to argue that all UN member-states have an obligation to support the Court, numerous key states and diplomats, including US Ambassador Susan Rice, have begun to switch their tune in recent months (some have not – Australia and Germany continue to support Gaddafi facing justice at The Hague). Just a few short weeks ago, they suggested that Gaddafi need not be brought to justice at all and could stay in Libya. Instead of standing by the Court, Rice and others have begun to curry favour with the Libyan people and their rebel-led transitional regime who understandably thirst to see their tyrant on trial in Libya, before their own eyes.

UN Security Council members voted unanimously to refer the situation in Libya to the ICC (Photo:

The attitude of Rice, UK Foreign Secrary William Hague and others is perhaps unsurprising. Doing business in Libya had been very lucrative for numerous states, including those at the forefront of the intervention to support the rebels. This week wikileak cables allegedly showed that American Senator and Former Presidential candidate John McCain had offered to help Gaddafi just months before the Colonel’s brutal crackdown on civilians. Meanwhile, The Independent argued that international powers are jostling for a position in a post-Gaddafi Libya:

“The world’s leading powers yesterday were scrambling to prevent the violent overthrow of the Gaddafi regime from descending into chaos, even as they quietly jostled to benefit from oil and economic reconstruction contracts to be handed out by a new government in Tripoli.”

What this suggests is that the political calculus of those states which intervened in Libya has shifted away from supporting the mandate of the ICC towards other political goals in a post-Gaddafi Libya. And, in turn, this suggests that their view of the Court’s role in Libya was never about justice and always about politics; it was never secure or unwavering support and always had the potential for being displaced by other political interests.

If getting a foothold on lucrative oil and reconstruction contracts means acquiescing to a trial of Gaddafi in Libya, then the attitude appears to be: so be it. If that means a trial of the Tripoli Three that isn’t up to the international standards, well, that’s a small price to pay, and who really cares, after his vicious, autocratic tenure that Gaddafi receives a “fair” trial? In a trial, Gaddafi might also unearth embarrassing deals he had with human rights respecting, Western states. It doesn’t take much research to find a litany of economic and military deals. Besides, states can hide behind the veneer of arguing that “the future of Libya and the fate of Gaddafi must be up to the Libyan people” as Hague does:

The primary problem, of course, is that this is in direct contradiction with the UN Security Council referral of Libya to the ICC which gave the Court primary jurisdiction over those it indicted! The referral took accountability for the Tripoli Three out of the hands of Libyan people and into the hands of the ICC. 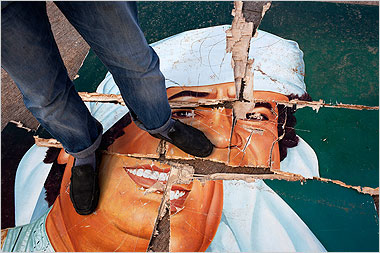 There are lots of other problems with having a trial of Gaddafi in a Libya where both sides of the conflict have allegedly committed (and allegedly continue to commit) atrocities. There has been no indication that Libya’s judiciary would be able to handle such a case legitimately and effectively. As I recently argued, these issues would not impinge on a trial if the ICC tried the Tripoli Three itself in Libya but to date, I appear to be the only one advocating this option.

The relationship between the Security Council and the Court has never been easy. Libya, as another chapter of this politically charged relationship, may have a sad story to tell for supporters of the Court: it was used and then abandoned to fend for itself.

Mark Kersten is a consultant at the Wayamo Foundation, a Senior Researcher at the Munk School of Global Affairs, and a law student at McGill University Law School. He is also author of the book, 'Justice in Conflict - The Effects of the International Criminal Court's Interventions on Ending Wars and Building Peace' (Oxford University Press, 2016).
View all posts by Mark Kersten →
This entry was posted in Human Rights, International Criminal Court (ICC), Justice, Libya, Libya and the ICC, UN Security Council, United Kingdom, United States. Bookmark the permalink.

6 Responses to Used and Abandoned: Libya, the UN Security Council and the ICC